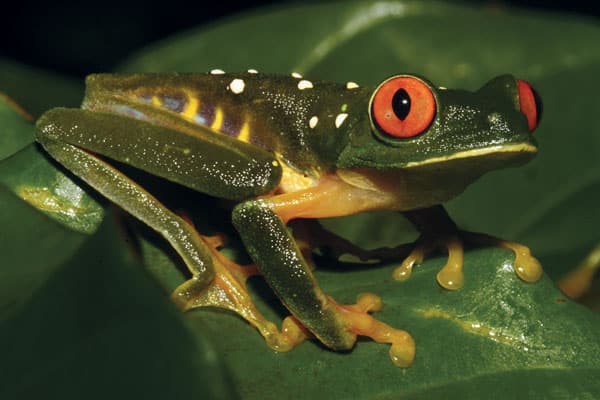 With approximately 40 percent of the country set aside as national parks and preserves, the biological diversity of Belize is impressive. More than 160 species of amphibians and reptiles are presently known to occur within its borders. Lizards are, by far, the most conspicuous. They seem to run out from under every footstep.

Belize is a predominantly English-speaking, Central American country bordered to the north by Mexico, to the west and south by Guatemala, and to the east by the Caribbean Sea. Road conditions are mediocre to almost undrivable, but with a sport utility vehicle you can manage well. The climate is relatively mild throughout the year with the wet season spanning May through November. Rainfall, however, varies depending on latitude and altitude. The northern portion receives as little as 50 inches a year, and the south (especially the Maya Mountains) sees as much as 200 inches a year. Hurricanes are always a looming threat throughout summer and early fall, but severe ones are uncommon. 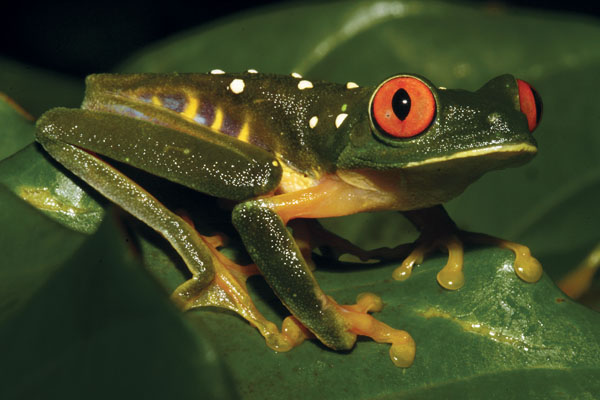 A male red-eyed treefrog (Agalychnis callidryas) perched in vegetation over a temporary pool in the forest.

My wife, Monica, and I started our trip in the northeast on the offshore island Ambergris Caye (pronounced “key”) in July during the wet season. This is certainly the most touristy part of the entire country, but herps are still numerous. We quickly became accustomed to brown anoles (Norops sagrei), black spiny-tailed iguanas (Ctenosaura similis) and striped basilisks (Basiliscus vittatus) making frequent appearances. American crocodiles (Crocodylus acutus) were common in the lagoons near the south end of the island. Unfortunately, the most abundant herp was one that was introduced and has become firmly established. House geckos (Hemidactylus frenatus) scurried about on the vertical surfaces of virtually every building. 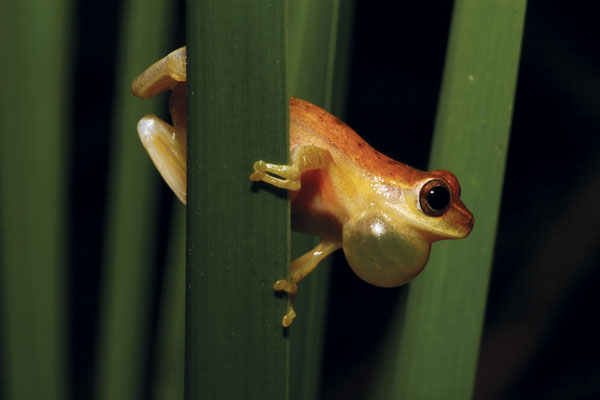 Yellow cricket treefrogs (Hyla microcephala) were the most commonly encountered anurans during this trip.

After a few days of snorkeling with nurse sharks, golden-tailed moray eels and gaudy parrot fish along the world’s second-longest barrier reef, we headed inland to our next destination: Crooked Tree Village, a small settlement in the middle of a lagoon in Crooked Tree Wildlife Sanctuary. Once there, we saw Morelet’s crocodiles (Crocodylus moreletii) basking along the Northern Lagoon. On some of the trails winding through the wildlife sanctuary we encountered Rio Grande leopard frogs (Rana berlandieri), green iguanas (Iguana iguana) and sheep frogs (Hypopachus variolosus). Under a piece of debris along the lagoon shore, I uncovered several sabinal frogs (Leptodactylus melanonotus) as well as a checkered garter snake (Thamnophis marcianus praeocularis).

After dark we drove some of the area’s unpaved roads, where we came upon a group of chorusing yellow cricket treefrogs (Hyla microcephala). These tiny frogs, with their high-pitched mechanical shriek, were the most commonly encountered anurans throughout the trip.

Heading to the mountains, we spent several days in the beautiful Mountain Pine Ridge Forest Reserve in the Cayo District. Our cabana was perched on a steep cliff overlooking Five Sisters Falls. It was one of the most spectacular settings imaginable. The myriad of pools downstream from the falls provided breeding habitat for marine toads (Bufo marinus), Gulf Coast toads (B. valliceps), Mexican treefrogs (Smilisca baudinii) and more Rio Grande leopard frogs. After dark the quacks, grunts and trills were almost overwhelming! 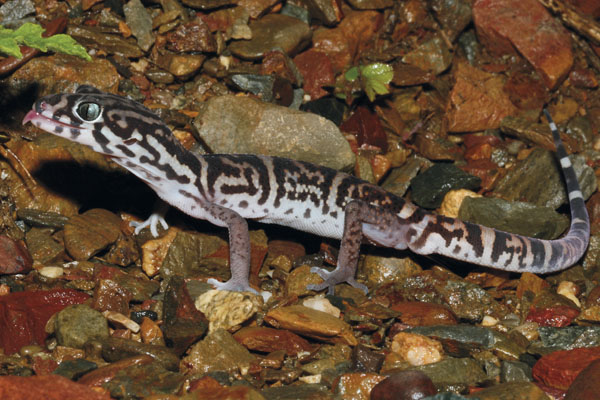 One night we hiked a forested trail from our cabana down to the river and encountered polymorphic robber frogs (Craugastor rhodopis), a small red coffee snake (Ninia sebae) and a very spirited terciopelo (Bothrops asper).

Terciopelos are sometimes referred to as fer-de-lances. Another snake species, Bothrops atrox, uses the fer-de-lance common name, and there is some controversy over whether the two snakes are actually different species. Many herpetologists consider Bothrops atrox to be the southern variant of this complex.

Arriving back at our quarters, we discovered that we shared lodgings with a couple turnip-tailed geckos (Thecadactylus rapicauda) and a small Stauffer’s treefrog (Scinax staufferi), which had taken up residence above the shower head.

Hidden in the Ruins

We spent the remaining days of our trip radiating from the relatively small capital of Belmopan, located at the northern end of the Hummingbird Highway. During the day we explored the Mayan ruins of Xunantunich, which means “maiden of the rocks” in Mayan. A juvenile Central American speckled racer (Drymobius margaritiferus) actively patrolled there for small lizard prey, and Campbell’s forest toads (Bufo campbelli) hopped underfoot. Under a damp log we found a small yellow-spotted night lizard (Lepidophyma flavimaculatum), and numerous Central American and rainbow ameivas (Ameiva festiva and A. undulata, respectively) scuttled about in thick leaf cover. 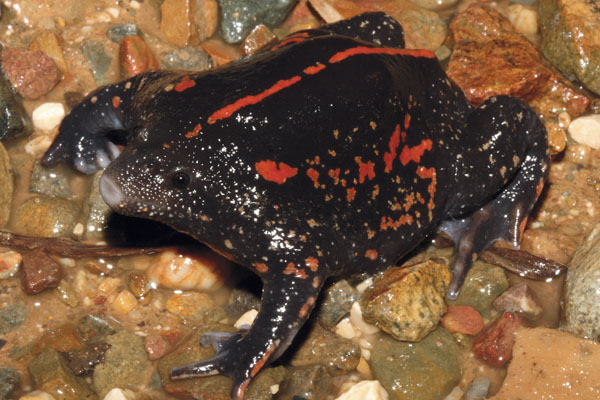 In the evenings we again drove along Hummingbird Highway. We spotted several cat-eyed snakes (Leptodeira septentrionalis), but only four of 16 were found alive; the rest were dead on the road. Other living snakes we spotted included the white-lipped, spot-bellied snake (Coniophanes fissidens) and a pygmy snail-sucker (Sibon sanniola) making its way across the pavement. A couple Yucatan banded geckos (Coleonyx elegans) also made appearances.

Rain had been falling ever since day seven on our 15-day trip, and it rained harder as time wore on. With the rain intensifying, we spotted dozens of frogs hopping across the road. Most were Mexican treefrogs and yellow cricket treefrogs. As we stopped to more closely examine a Smilisca baudinii, Monica noticed a large blob lumbering up ahead in the headlights. I jumped out of the car only to discover one of the coolest frogs I have ever seen. It was an adult Mexican burrowing toad (Rhinophrynus dorsalis), and its girth was most impressive. As I photographed this obese anuran, a smaller male, hopping aimlessly through the flashlight beam, crashed the session.

When I finished with these amphibians, I heard a sound I had never heard before but recognized instantly. The descriptions in literature I had read matched perfectly: a loud “chock” repeated every 30 seconds or so. A fair number of red-eyed treefrogs (Agalychnis callidryas) were calling. Perched high in forest vegetation overhanging a temporary pool, I spotted a gorgeous male. Soon I spotted another and then another. I was pleased to find this common — yet most impressive — amphibian.

A Sight Before the Flight

On our last day, we drove northeastward toward the international airport in Belize City. We took a short cutoff road, where a large green parrot snake (Leptophis ahaetulla) crossed rapidly in front of us. I slammed on the brakes, jumped out of the car and ran as fast as I could after the fleeing snake. 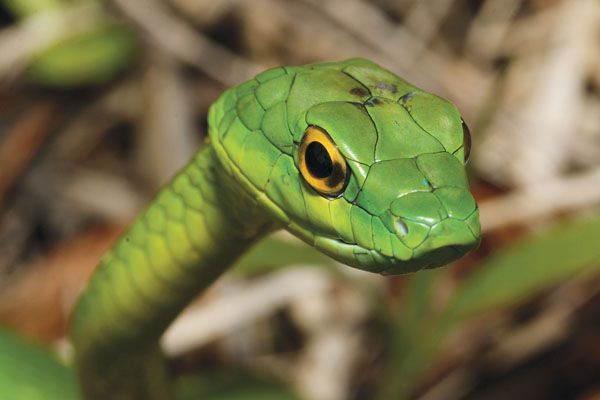 Fortunately, its first instinct was to climb a tree that was neither too tall nor near other trees that would allow it to escape. I grabbed it about midbody and carefully extracted it from the branches. It showed its displeasure with a large gaping mouth and blue tongue, but surprisingly, it never attempted to make contact with those rear fangs. After a short photographic interlude, we once again headed for the airport to catch our flight back to Seattle, Wash.

All told, we managed to find 48 species of amphibians and reptiles, and countless birds, unusual insects and mammals. Belize is a place I will most definitely visit again in the future.