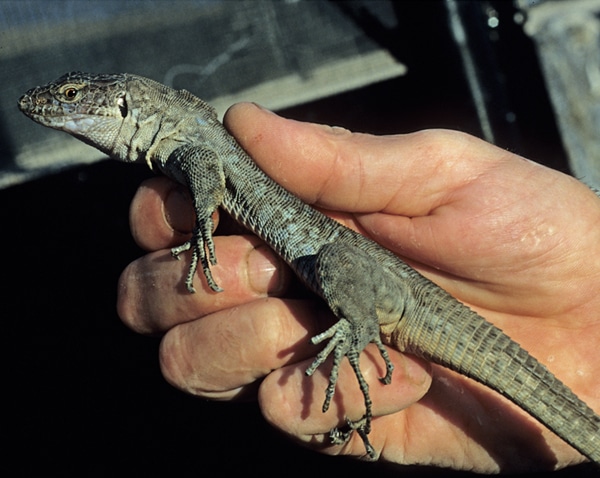 Herping Travels In The Canary Islands

The Canary Islands make up a volcanic archipelago that is located off the northwest coast of Africa. It is adjacent to the border between Western Saha

The Canary Islands make up a volcanic archipelago that is located off the northwest coast of Africa. It is adjacent to the border between Western Sahara and Morocco and considered to be a geologic extension of the Atlas Mountains in Morocco. The archipelago consists of seven main islands; from west to east they are El Hierro, La Palma, La Gomera, Tenerife, Gran Canaria, Fuerteventura and Lanzerote. These islands belong to Spain under the realm of autonomous communities, which means that they belong to Spain but govern themselves.

The average temperature throughout the Canary Islands is pretty much consistent at about 70 degrees Fahrenheit. Average rainfall is about 5.25 inches as measured at Las Palmas, Gran Canaria. The average rainfall decreases as you move to the east due to the influence of coastal Africa, and increases as you move west due to the influence of the Gulf Stream. The rainy season usually occurs from September to April, but varies slightly for the same reason as the variance in the average rainfall.

When one thinks of the Canary Islands, amphibians and reptiles are not usually the first things that come to mind. However, they are a very interesting herping destination because almost all the reptiles are not only indigenous to the island chain, but each individual island has its own indigenous species. 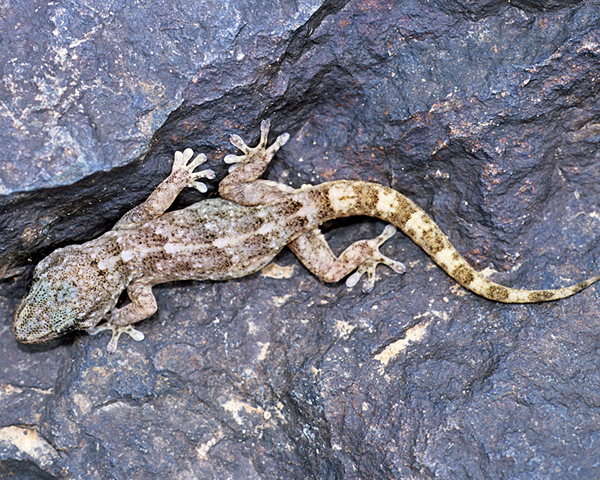 There are no native amphibians on the Canary Islands, but there are two species of frog that do occur on some of the islands as introduced species. These are the Iberian water frog (Rana perezii) and the stripeless tree frog (Hyla meridionalis). Both frogs are found primarily around populated areas on the island of Tenerife. There are no other amphibians found on any of the islands.

Canary Islands Is Not Named After The Bird

Many people think the Canary Islands are named after the canary bird, but this is not the case. The canary is not indigenous to any of the islands. Instead, it is believed they are named after a dog, the Perro de Presa Canario, which was either found on the islands or brought over by early conquistadors. The dog’s name translates to “Canary Dog of Prey,” and it is believed that the breed was trained to hunt and fight in times of war by the Guanches, who were the aboriginals that inhabited the Canary Islands prior to the arrival of the conquistadors.

The islands are home to several endemic lizard species. The Mediterranean house gecko (Hemidactylus turcicus) also occurs, though it is not endemic to the Canary Islands. There are no chelonians, aside from various sea turtles found in the waters surrounding the islands, and there are no native snakes. There are, however, well-established populations of the introduced albino California kingsnake (Lampropeltis g. californiae). These kingsnakes thrive in the Mediterranean climate, and because they have no natural predators in the Canary Islands, they are impacting native fauna in a negative way. It is such a problem that outside assistance has been hired from the United States to help try and eradicate the kingsnakes. 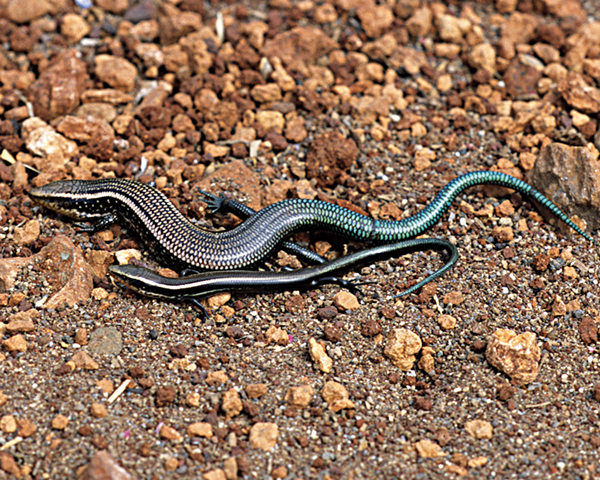 Female Gran Canaria skink with a youngster alongside.

​My flight to Gran Canaria began in San Diego, Calif., and ended in Las Palmas de Gran Canaria via Atlanta and Madrid. The airport I flew into—Aeropuerto de Gran Canaria—was located on what little bit of flat land remained on the island. Its runways paralleled the coastline, with the ocean on their east side and high mountains on the west. The approach to the island involves flying directly toward the mountains before making a sharp turn to line up with a runway—a maneuver that made for a very interesting, not to mention somewhat terrifying, introduction to the Canary Islands. 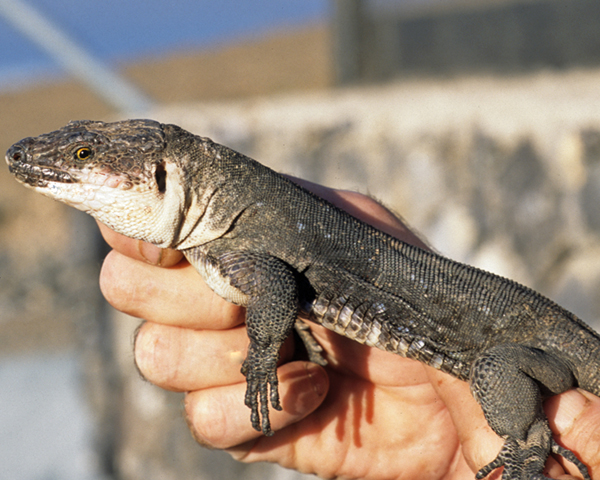 I was picked up at the airport by my friend, Jim Pether, and promptly whisked off to the town of Galdar, where his reptile park, Reptilandia, was located (the park is still there, but it is no longer open to the public). Once we arrived I was treated like royalty and set up in a wonderful guest room, where I promptly crashed for a much-needed nap.
Later, I was given a tour of Jim’s amazing park. It was 3 acres, built into the side of an extinct volcano. This location made the park difficult to build, but resulted in a very interesting design. The terrain was coarse rock among large boulders, with little to no plant cover, and the animal enclosures were nicely terraced into the side of the mountain. Occasionally, they were occupied by unwelcome visitors from the surrounding landscape. 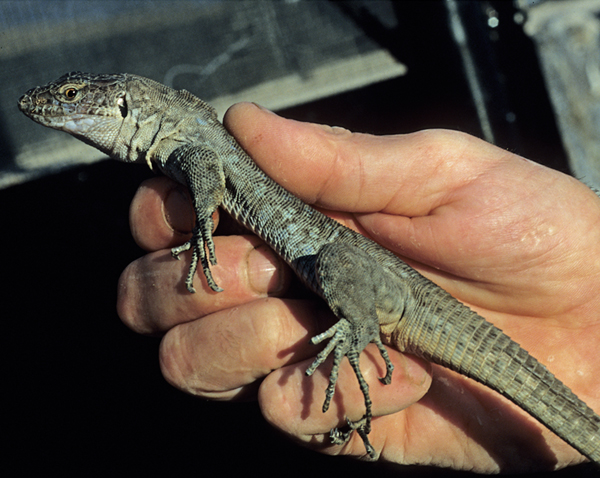 I was put to work removing some of these unwanted animals, which turned out to be one of the most impressive lizards found in the Canary Islands, the Gran Canaria giant lizard (Gallotia stehleni). On Gran Canaria, I would equate the abundance of G. stehleni to the reptilian equivalent of a rat infestation. It is an opportunistic feeder, taking both animal and plant matter. At Reptilandia, they were very easy to find because they would go after the food intended for the animals on display, getting trapped in the enclosures, from which they had to be frequently removed.

Male G. stehleni can reach up to 20 inches in length, with big teeth and strong jaws that can deliver a very nasty bite if not handled carefully. The triangular head is burnt orange in color with thick, muscular jowls. The body is a solid dark brown. Females are half the size of the males, with a smaller head and a uniform dark brown color. Juvenile G. stehleni of both sexes are brown with a vague striped pattern similar to that of an American whiptail. 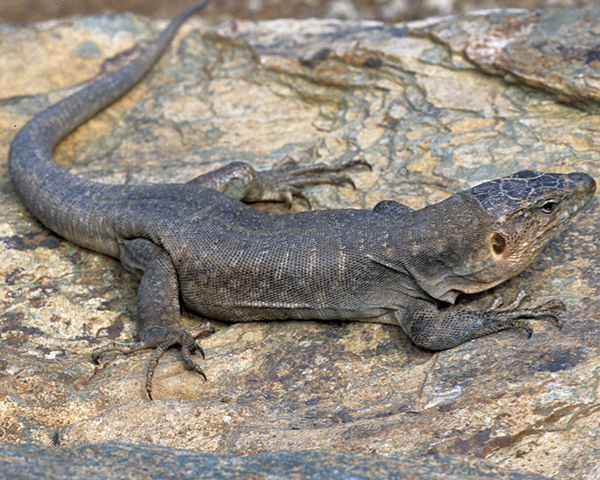 Boettger’s wall gecko (Tarentola boettgeri), which looks similar to the Mediterranean gecko but is roughly three times the size, was also common around the park, where it was often found under boards that were leaning against buildings, as well as on walls near lights at night. It is found on a few of the islands.
We went in search of another lizard a few miles from the park, where it preferred a moist habitat. We hunted for it in one of the many terraced fields that were created in large part by the Guanche Indians many years ago, due to the lack of level land. It was in one of these grassy fields that we found the most colorful lizard on Gran Canaria: the Gran Canaria skink (Chalcides sexlineatus).

This skink is totally endemic to Gran Canaria. It is a relatively small species, measuring only 8 inches in length. It has twin stripes on the back with shiny golden scales that give way to an emerald green tail beyond the vent. The striping on the males is more pronounced, as the female’s scales are not as vibrantly golden. The tail of the male is also a darker green than the female’s tail. Juveniles are a chocolate brown with gold striping and emerald green tails. We found several under flat stones that were scattered around the fields. While we did not find a large variety of lizards, we did find a relatively large number of the species we did find, which was fun.

​Our next quest was on the island of Gomera, two islands west of Gran Canaria. Having a choice between taking a plane or ferry, we decided to go by ferry from Gran Canaria to Tenerife, then on to Gomera. It took roughly 90 minutes travel time between the islands.
Gomera is like all the other Canary Islands in that it is a mountainous volcanic island with little to no flat land areas. We were looking for the Gomera giant lizard (G. simonyi bravoana). The rugged landscape of the Canary Islands makes many areas inaccessible, and one wonders how many amphibians and reptiles are yet to be discovered (or rediscovered) on the islands. Gallotia simonyi bravoana was thought to be extinct until an instance of “look what the cat dragged in” occurred, literally, when a Gomera giant lizard was found by a cat. Originally, the lizard was thought to be rare but it appears to be quite common within its preferred habitat on Gomera, which are terraces on high cliffs.
Upon arrival on Gomera, Jim and I settled into a small basement apartment that had clay walls and old, wooden-framed windows, and which was furnished with simple antique furniture (I found it a bit spooky, actually). We soon headed out to look for the Gomera giant lizard. 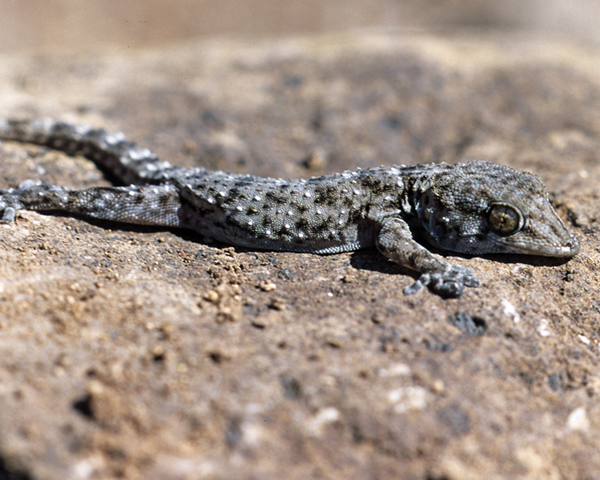 The place where we were staying was on the opposite side of the island from where the lizard was reported to be found, so we had to drive over the top of the island, through a wonderful cloud forest, then down to the coast on the other side. There, we found black sand beaches bordering the most picturesque little town.
The site where the Gomera giant lizard was supposed to be found is on the side of a cliff, where previous researchers had set up and left behind climbing ropes to access the cliff. It was unnerving climbing up to where the lizard is found, about 500 feet up not a sheer cliff, but one that was close enough.

Once we got up there, we did find a very impressive view, but we did not find any Gomera giant lizards. That was a disappointment, but the adventure getting there made up for it.
We next traveled to a research center where the few Gomera giant lizards that had been captured were kept for a breeding program. Gallotia simonyi bravoana turned out to be a nondescript lizard that is gray on top and white on the bottom. While its appearance was nothing special, the lizard itself was because it was thought to be extinct prior to being rediscovered. No expense was spared in building the impressive facilities to propagate the lizards.

We did find two additional members of the local herpetofauna around the Gomera giant lizard breeding facility. The most common was the Gomera wall gecko (T. gomerensis), which is similar in appearance to the Moorish gecko (T. mauritanica). We found communal nesting sites, and numerous hatchlings, within the rock walls of terraced agricultural plots similar to those found on the other islands, and in the same habitat we found a Boettger’s lizard (G. caesaris).
While the Canary Islands might not be a dream herping destination you’ll find on the bucket lists of many field herpers, this island chain really is a wonderful place to look for herps. The landscape is amazing, and you can find reptiles there that are not found anywhere else in the world—and some of them are quite impressive.

E.J. Pirog has been keeping chelonians, among other amphibians and reptiles, for more than 40 years. He has written many articles, in addition to some books, about these animals, a passion that he likes to share.