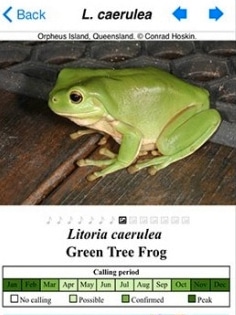 Scientists with James Cook University in Australian have developed an app for Apple’s IOS that quickly identifies a frog species based on its call. The app, Frogs of Australia, enables you to record a call while out herping with the app and it will immediately identify what species it is with a description, images of the amphibian, location maps, and call sounds. The app has data on all of the 238 known frog species in the country. 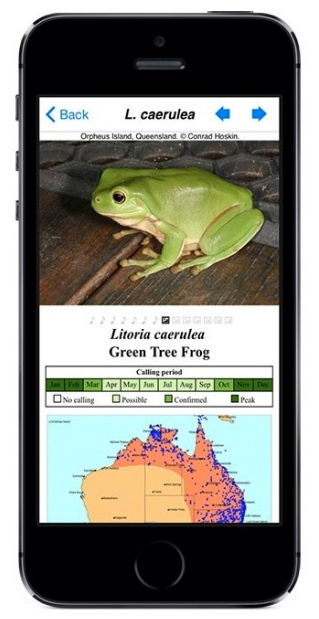 Frogs of Australia records the frog call and then identifies the species.

The app, developed by James Cook University biologist Dr. Conrad Hoskin and Ph.D student Stewart MacDonald was developed over the course of the last three years and is already popular on iTunes. There are currently two versions of the app. A free lite version features frog profiles of 16 species of Australian frog. The full version of the app is $19.99 and has species profiles for all 238 known frogs in Australia, and more than 1200 high resolution images from Australia’s best wildlife photographers.

System requirements to run the app are iOS 6.1 or later, and 72MB of free space. It works with iPhone, iPad, and iPod touch and is optimized for iPhone 5, iPhone 6 and iPhone 6 Plus. More information on Frogs of Australia can be found on Apple's iTunes store. An Android version is being developed.