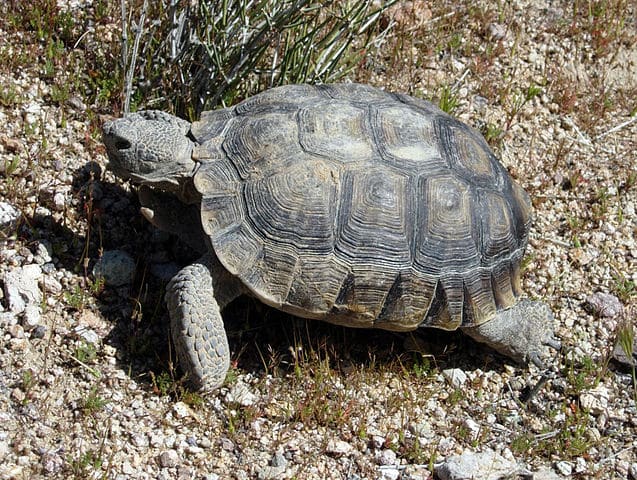 Searching for the threatened desert tortoise (Gopherus agassizii) sometimes felt like looking for a needle in the haystack somewhere in the Desert Tortoise Natural Area of the Mojave Desert.

The Mojave landscape appeared lifeless, nothing stirring except swaying creosote bushes. A desert tortoise can simply melt away in the desert here, the natural area a safe haven for all desert-dwellers seeking refuge from off-road vehicles, habitat degradation, subdivisions, highways, military exercises and industrial uses. 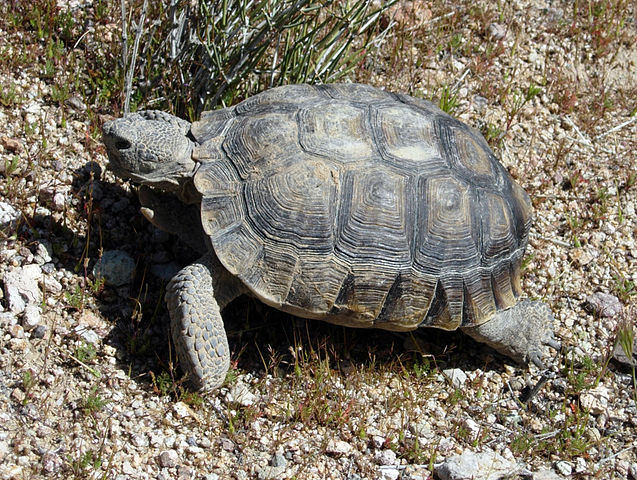 Mark A. Wilson (Department of Geology, The College of Wooster)

The desert tortoise was a popular animal taken from the Mojave Desert in the 1960s and 1970s. Now it is a protected species.

My wife and I continued our search far and wide for California’s state reptile and the largest plant-eating reptile in the southwestern United States. Established in 1974, the natural area is 39.5 square miles, and it has three trails, two of which are marked with interpretive signs citing various natural wonders of the desert. The third trail, known as the Discovery Loop Trail, is 1.78 miles long and is not marked, but the desert wandering is quite good. In 1980, the U.S. Bureau of Land Management and the U.S. Department of the Interior designated the area as an Area of Critical Environmental Concern.

After coming up goose eggs and the desert beginning to swelter, I relented and spoke to the resident naturalist overseeing the Desert Tortoise Natural Area. He gave me a hint as to where to find an elusive tortoise.

“Head southwest from here for about 200 yards,” he said. “You’ll find a female tortoise near its den beneath a creosote bush.”
The only problem was the entire Mojave Desert was ensconced in creosote bushes and its prickly sidekick the cholla cactus. We did what he said and headed in the suggested direction. We scoured beneath too many creosote bushes to count, trying to catch a glimpse of a tortoise and its den roughly the same shape as a tortoise—half moon-shaped and flat on the bottom.
I kept the interpretive area in our sights while estimating 200 yards along the way. Finally, I discovered a den site encased at the base of two creosote bushes. Nestled in the shade near the entrance of its den, a desert tortoise (Gopherus agassizii) sat motionless, waiting out another Mojave afternoon.

It quickly became apparent that the Desert Tortoise Natural Area was also home to a slew of other reptiles. We took our time, remained patient and absorbed the vast flora and fauna of the Mojave, hoping to catch a glimpse of the 27 species of reptiles in the region.

The first encounter we had was with a desert horned lizard (Phrynosoma platyrhinos) warming itself in the brown and orange pebbles, almost undetectable on the Mojave desertscape. If it hadn’t scampered beneath a paperbag bush I probably would’ve walked right by it. However, it showed itself again, charging toward an anthill, lapping up several before fleeing for the shade of a cheesebush.

We followed the narrow, serpentine path of a dry arroyo, carefully scouring its edges for any reptiles resting in the shade. There was a speedy male zebra-tailed lizard (Callisaurus draconoides) in hot pursuit of a female. They quickly zigzagged across the arroyo, scattering pebbles in their wake, their black and white tails standing erect as they vanished in the desert. Probably the most common lizard was the side-blotched lizard (Uta stansburiana), including one that was cranking out territorial push-ups on a rock. A gopher snake (Pituophis catenifer catenifer) slithered at my feet.

Further down the wash, a female long-nosed leopard lizard (Gambelia wislizenii) sat frozen only a few feet from where we stood. She stood out, with her breeding plumage of orange spots all over her body. I lied down and watched her stalk a blister beetle stumbling along, unaware of the predator lurking several feet away. She quickly scooped up the beetle and sped off.

After sitting out the sweltering midday heat, we headed back out to the Discovery Loop Trail to search for any reptiles soaking in the last remaining warm rays of light. We tried another wash, and after a couple miles of looking, we came up empty.
As the sun sank, nearly reaching the toothy crest of the Eastern Sierra, I grabbed my wife’s right arm when she was about to step on a Mojave green rattlesnake (Crotalus scutulatus) laying motionless and camouflaged against the warm desert floor. Known as the most dangerous snake in the Mojave, it possesses the most potent venom of any rattlesnake in North America; it is 16 times more venomous than a sidewinder. It’s also known for its cantankerous demeanor.

Luckily, we didn’t experience any of this during our encounter. At sunset, the naturalist looked at my wife’s photos and confirmed the rattler was a female. She was neatly coiled in the wash and asleep. Hard to imagine she didn’t feel our impact tremors as we approached and remained docile the entire time we watched her. She only raised her triangular head, stuck her neck out in our direction and flicked her forked tongue several times before she rested her head back upon her coiled body.
Sometimes mistaken for a western diamondback rattlesnake because of the diamond shapes on its back, the Mojave green rattlesnake enjoys its primary habitat of creosote bush and high desert elevation of 2,000 to 4,000, making the Desert Tortoise Natural Area the ideal environment for this greenish-gray snake.

Making our way back to the interpretive area, we encountered a hungry desert tortoise. Moving as fast as a tortoise can, it ate voraciously while awkwardly traveling across the desert floor, stumbling over dead cholla cactus stocks and thrashing through a couple of creosote bushes. It strained its neck to look at us, a smear of dark green caked across its mouth, obviously enjoying the Mojave’s hardy menu of desert flora before heading back to its den.

Bring plenty of water when in the desert; 2 gallons per day is a minimum. Hat, sunscreen, sunglasses and food should be on hand at all times.

The desert tortoise (Gopherus agassizii) is often found under creosote bushes in the desert.

Take Highway 14 to California City, two hours north of Los Angeles. The reserve is four miles northeast from there. Take Randsburg Mojave Road and look for interpretive signs on your left. Turn left and follow the dirt road to the reserve (dirt roads surround the reserve). Red Rock Canyon State Park is directly north. For more information, go to tortoise-tracks.org.

Chuck Graham is a freelance writer and photographer from Carpinteria, Calif. His work has appeared in wildlife and nature publications such as BBC Wildlife Magazine, Wildlife Conservation, Wildbird, World Birdwatch, Defenders of Wildlife, E magazine and Nature Friend.