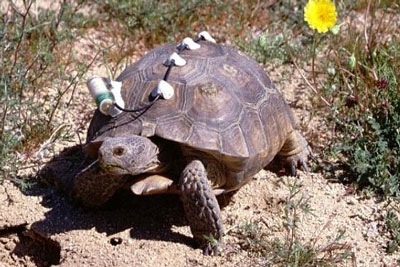 Twenty six year study looks at drought and how it affects ecosystem of Agassiz desert tortoise.

Scientists with the U.S. Geological Survey have just completed and published a report saying that the Agassiz desert tortoise (Gopherus agassizii) population in California's Sonoran Desert is in decline due to drought. The study, which began in 1978 and concluded in 2012, looked at how desert tortoise populations in the Sonoran Desert react to a change in climate. 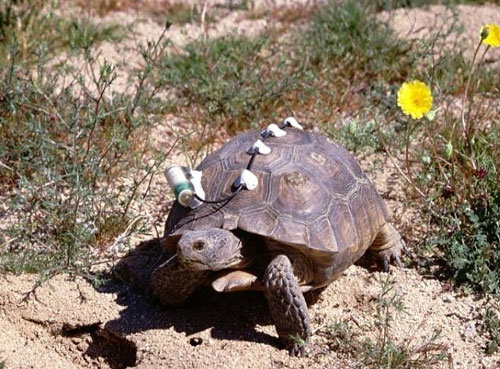 A desert tortoise with a tracking device attached to its shell.

In their study, the scientists say that the area in which the tortoise lives may become uninhabitable for them based on published climate models that project warmer and dryer conditions in the desert in the future. They studied a one square mile plot of desert in California's Joshua Tree National Park. Because of the long life span of the tortoise, the scientists studied 1.4 generations of the animal.

The scientists believe that the decline in tortoises on the one square mile plot can be attributed to drought and its effects on plants that are a source of food for the tortoise as well as small mammals that are prey items. During the times of drought, when plant and small mammal production is severely affected, predator animals that usually preyed upon the small mammals that ate plants turned to the desert tortoise as a source of food. The scientists confirmed the predation, finding the remains of desert tortoises over the years with coyote hairs on the remains, as well as coyote scat with tortoise remnants.

The complete open access study can be downloaded here.