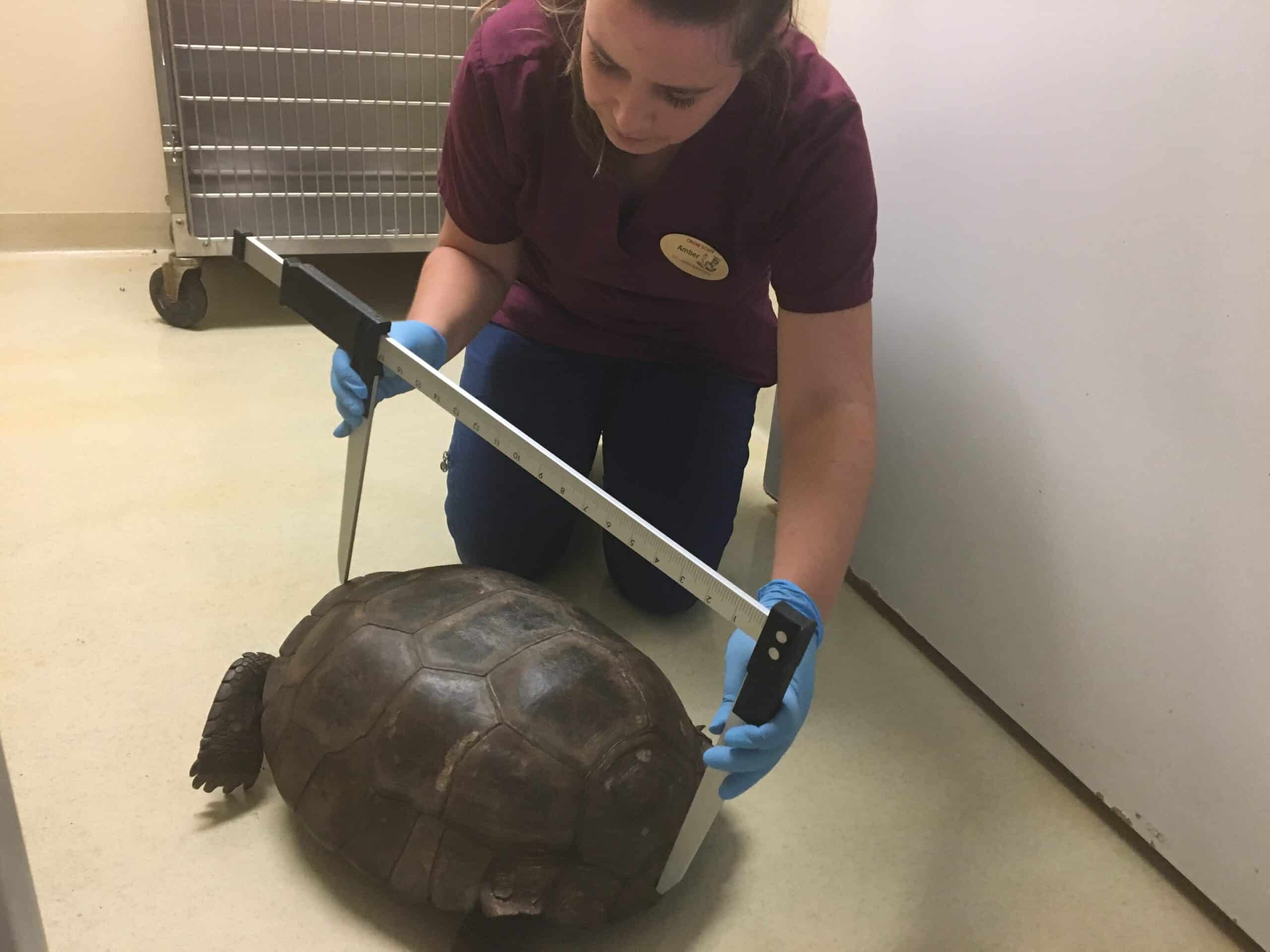 The male tortoise weighs 33 pounds and has a 17.3-inch carapace.

At the Clinic for the Rehabilitation of Wildlife (CROW) in Florida, a gopher tortoise (#18-4370) was admitted to the center after reports it was experiencing diarrhea and lethargy in Koreshan State Park. When veterinarians were documenting his measurements, they were surprised to discover the male gopher tortoise weighs 33 pounds and has a 17.3-inch carapace. According to state officials of the Florida Fish and Wildlife Commission, this is the largest gopher tortoise specimen ever documented. Before the discovery of this male, the record was 14.5 inches and 31 pounds. The potentially record setting tortoise is apparently in poor condition, and vets speculate his "healthy" weight should actually be much higher. Although size does not indicate age with tortoises, vets believe this large gopher tortoise to be around 50 years old. With the dedicated volunteers and staff of CROW, this amazing gopher tortoise should will be monitored and treated until he is healthy again. The CROW Clinic rehabilitates wildlife, including approximately 60 to 75 gopher tortoises a year, where most are admitted due to vehicular injuries.

Posted by CROW – Clinic for the Rehabilitation of Wildlife, Inc. on Thursday, December 6, 2018

Gopher tortoises (Gopherus polyphemus) are endemic to the southeastern United States. They are the only native tortoise species in the eastern US, and although they are found in Alabama, Mississippi, Louisiana, Georgia, and South Carolina, the majority of their remaining populations live in Florida. Once abundant, gopher tortoises are classified as "vulnerable" by the IUCN and have dramatically decreased because of development and habitat loss.

Gopher tortoises get their name from their remarkable ecosystem engineering abilities. Gopher tortoises are able to dig burrows more then 10 feet deep and 40 feet long. These burrows are used by many other animals, which makes gopher tortoises a vital component of their natural ecosystems, also known as a keystone species. Very few tortoise species dig intricate burrows like this. More than 300 animals depend on gopher tortoises and their homes, and without them the whole ecosystem would change dramatically. Animals ranging from snakes, rabbits, amphibians, and even invertebrates either share or use abandoned gopher tortoise burrows to live their lives. The burrows provide shelter, diet, nesting sites, and a unique niche for many life forms. Gopher tortoises help stabilize the biodiversity in their natural habitats, which include scrub, pine flatlands, and coastal dunes ecosystems. The protected habitat and parks that house gopher tortoises are very important to the survival of their species overall, but fragmentation and habitat loss continue to hurt the species' populations.

The CROW Clinic dedicates themselves to the rehabilitation, conservation, and education of wildlife in South Western Florida. For more information, or to plan your visit, go to www.crowclinic.org. If you find an animal that is in need of help, call (239) 472-3644 ext. #222.