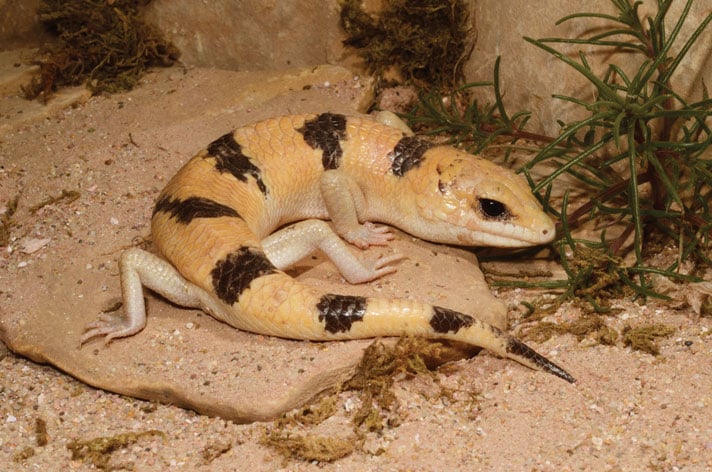 Peter’s banded skink is a newcomer to the trade that has arrived from northern Africa in just the past couple years.

Four New Species Of See-Through Glass Frogs Discovered In Peru
VIdeo: Man Steps On And Gets Bitten By Snake
Tortoise And Dog Are Best Friends

Question: What is a giant sandfish? I’m not talking about a big Scincus scincus. Is there something new that looks similar to the standard sandfish, but that gets larger? 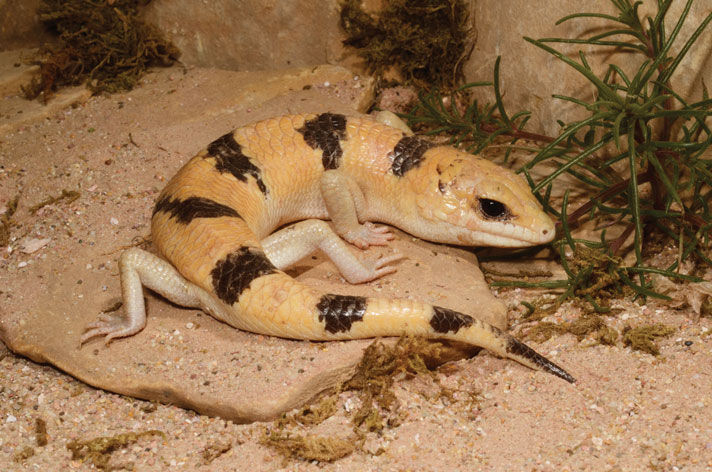 Peter’s banded skink (Scincopus fasciatus) grows to about the size of a husky adult leopard gecko.

Answer:  Peter’s banded skink (Scincopus fasciatus) is a newcomer to the trade that has arrived from northern Africa in just the past couple years. It averages about 5 to 7 inches in total length and inhabits the arid stretch of grasslands known as the Sahel, below the Sahara Desert. Superficially, it does resemble an overgrown sandfish (Scincus scincus), but it has a stouter build.

Very little is known of the lizard’s natural history, aside from the fact that it is a live-bearing (viviparous) species that is nocturnal. Captive specimens are fond of a range of insects and worms, but some keepers also report that they will take chopped veggies. Peter’s banded skinks seem to make calm pets; they have been compared to the bearded dragon in regard to general temperament.

Aside from these basic facts, Scincopus fasciatus hasn’t been in captivity long enough for much else to emerge about its habits. Perhaps lovers of blue-tongued skinks (genus Tiliqua), will take to this new addition, bestowing upon it attention from a growing list of devotees who may end up answering many of the questions about them.