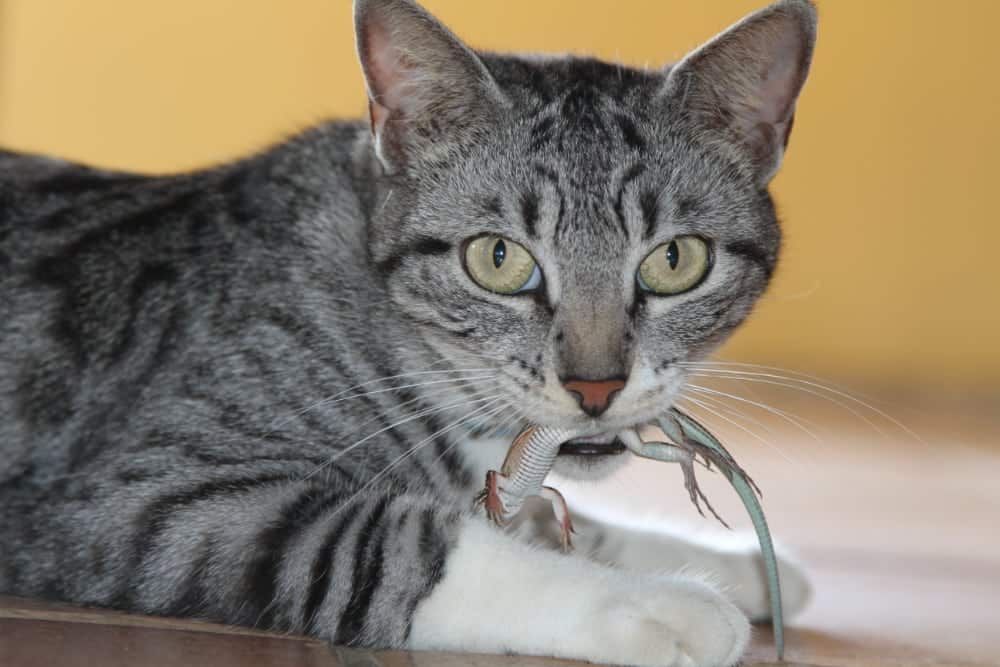 A cat captures a lizard. Photo by Eric Aust/Shutterstock

It is estimated that there are 2.5 million feral cats in New Zealand.

Feral cats, like everywhere else in the world, are a big problem in New Zealand, so much so that scientists are calling on more stringent feral cat management after one cat regurgitated 28 lizards.

Feral cats, like everywhere else in the world, are a big problem in New Zealand, so much so that scientists are calling on more stringent feral cat management after one cat regurgitated 28 lizards, mostly McCann’s skinks (Oligosoma maccanni) and Schist geckos (Woodworthia “Central Otago”)

According to Stuff New Zealand, Joe Sherriff, a resident of Alexandra in central Otago was out walking his dog when he happened upon a pile of dead lizards. Sherriff spread the pile of reptiles out and counted 28 lizards in all. He then contacted wildlife ecologist Dr. Grant Norbury, who is an expert on predator prey dynamics who determined, based on the evidence, that a cat had killed the reptiles.

“Given that it was a neat pile of lizards, with missing tails and puncture wounds, it looked like a cat had regurgitated its meal. Cats are known to cough up food if they’ve overdone it,” Norbury told Stuff New Zealand.

Norbury sent the photos to several colleagues who confirmed what he had suspected, that a cat ate all the lizards and then regurgitated them. Urban ecologist Professor Yolanda van Heezik of the University of Otago, says that the cat could also be someone’s pet given the lizard pile was about 400 meters from residences.

“Cat predation on our native wildlife is a really difficult issue, because cats are such important companion animals for many people,” Norbury told Stuff NZ.

“Many people think their pet cats aren’t a problem. They think feral cats do that damage, and their pet cats don’t. But they do. They’ve got the same instincts, they’re hunters. Whether the culprit was a feral or pet cat, we have to acknowledge that pet cats are part of the problem for our wildlife.”

It’s not only lizards around Central Otago, it’s also birds and invertebrates. And it’s across the whole country, in our big cities too,” Norbury said.

“We’ve got a real problem, we need to change the way we’re managing our cats.”

New Zealand is home to 120 native lizards, with 1/4 critical or nationally endangered and all nearly threatened.

It is estimated that there are 2.5 million feral cats in New Zealand. And it is also believed that they are responsible for the extinction of six endemic bird species.

New Zealand’s Department of Conservation controls feral cats around New Zealand, including in the Central Otago drylands, in an effort to protect the Otago and Grand skink. The DOC has also eradicated populations of feral cats on offshore islands, including Raoul Island and Rangitoto Island. But more needs to be done, scientists say, because the cats are continuing to multiply.