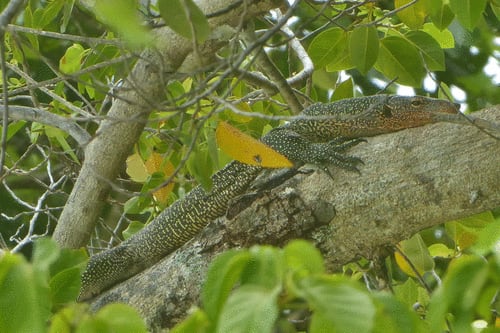 Varanus bennetti is native to Palau and the Mariana islands.

The researchers published both molecular and morphological data showing that the monitor of the Varanus indices group (of which there are nine species) found their way to Palau and the Mariana islands in the late Pleistocene, and were not introduced by humans, as it had been widely perceivedVaranus-bennetti.

Varanus tsukamotoi kashida is endemic to only the Mariana Islands, while the monitor lizard found in Palau, the Western Carolines and Sarigan Island have been redescribed as Varanus bennetti.

In their paper, “Taxonomy of Micronesian monitors (Reptilia: Squamata: Varanus): endemic status of new species argues for caution in pursuing eradication plans,” the researchers analyze the biogeographic distributions of both species as well as the previous arguments for human introduction, and also argue that routines placed on the Palauan populations should not take place and before eradication of these reptiles on the island takes place, it myst be proven that these large lizards are in fact introduced and not native.

Varanus bennetti is different from the other members of the group due to its coloration. It has a black dorsum that is evenly speckled with yellow scales, a dark blue/gray tongue, and peach coloring on the throat in life. It also features a cream colored to yellow temporal stripe. It is known as a terrestrial species which would rather take refuge somewhere on the ground rather than in trees. A dissected lizard found that it had ingested rats, insets and other lizards.

The lizard is considered by some to be a pest on some of the islands in which it is found, blamed for preying upon domesticated chickens as well as crabs. The cane toad  (Rhinella marina) was introduced to the Kayangel Atoll in Palau in an effort to reduce the populations of the lizard, and a bounty was placed on Varanus bennetti in the years 2011, 2013 and 2014. The V. tsukamotoi population on Cocos Island was also subject of a culling measure to enhance the chances of reintroducing the Guam rails (Gallirallus owsteni) a flightless bird, to Cocos Island. The bird was extirpated from Guam in the late 1980s and only survives in captive breeding programs at Guam’s Division of Aquatic and Wildlife Resources and certain US zoos.

The researchers discourage the exterminating of this new monitor lizard species, unless the “conservation of a more-seriously threatened species may benefit from temporary reduction of Varanus populations.”