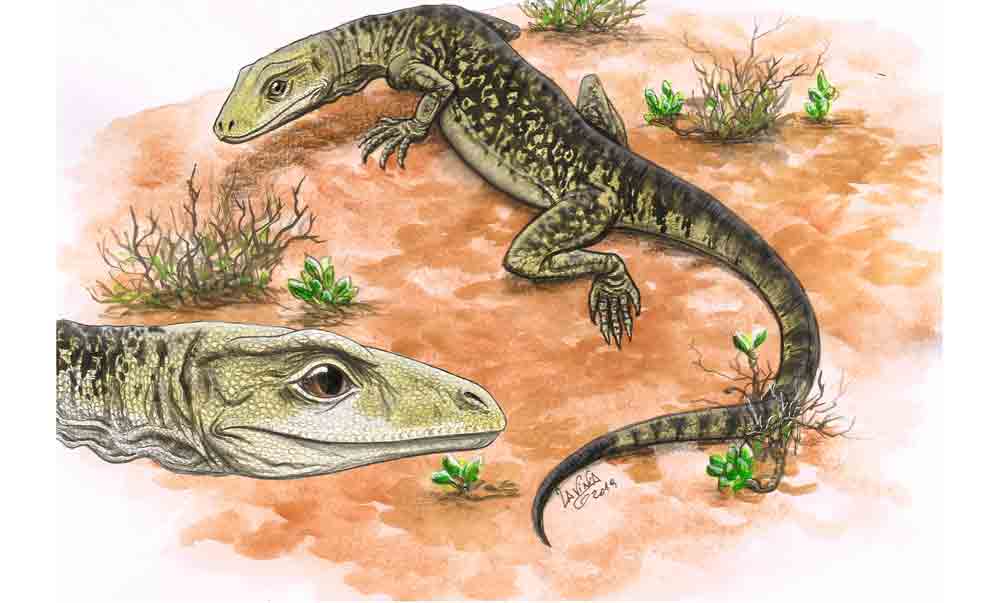 The one feature that Cryptovaranoides microlanius has that is not found in modern reptiles is the presence of an opening on one side of the arm bone where an artery and nerve pass through.

The lizard was misidentified as originating from the Middle Jurassic Period and actually hails from the Late Triassic.

The lizard is a game changer in the history of reptiles in that the changes in the rates of evolution most likely need to be reassessed.

A lizard fossil that was misidentified as originating from the Middle Jurassic Period actually hails from the Late Triassic, according to researchers led by Dr. David Whiteside of the University of Bristol’s School of Earth Sciences.

The lizard is a game changer in the history of reptiles in that the changes in the rates of evolution most likely need to be reassessed. The species, which languished in the museum’s collection since the 1950s is named Cryptovaranoides microlanius, which means small butcher. It was named as such due to its jaws that house sharp-edged slicing teeth.

“I first spotted the specimen in a cupboard full of Clevosaurus fossils in the storerooms of the Natural History Museum in London where I am a Scientific Associate,” Whiteside said in a press release put out by the university. “This was a common enough fossil reptile, a close relative of the New Zealand Tuatara that is the only survivor of the group, the Rhynchocephalia, that split from the squamates over 240 million years ago.”

“Our specimen was simply labelled ‘Clevosaurus and one other reptile.’ As we continued to investigate the specimen, we became more and more convinced that it was actually more closely related to modern day lizards than the Tuatara group.”
“We made X-ray scans of the fossils at the University, and this enabled us to reconstruct the fossil in three dimensions, and to see all the tiny bones that were hidden inside the rock.”

According to the researchers, Cryptovaranoides microlanius differs from Rhynchocephalia, (the genus it was originally placed in) in the brain case, neck vertebrae and shoulder region. It also has a median front upper tooth, and its teeth are set on the shelf of the jaw rather than fused to the crest of the jaw, the researchers said. 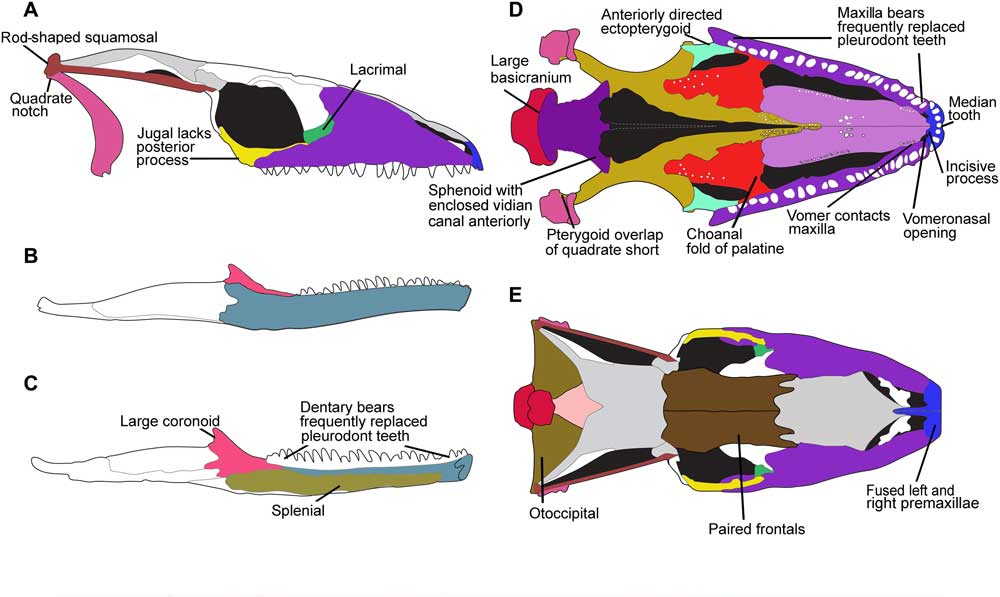 Reconstructed skull and mandible of C. microlanius, based mainly on the holotype PV R36822. Some key squamate features are labeled. Bones in light gray (nasal, parietal, and postfrontal) are unknown and speculatively reconstructed. Skull shown in lateral (A), ventral (D), and dorsal (E) views; right mandible in lateral (B), left mandible in medial (C) views.

The one feature that Cryptovaranoides microlanius has that is not found in modern reptiles is the presence of an opening on one side of the arm bone where an artery and nerve pass through. Other primitive features in the reptile included a few rows of teeth on the bones of the roof of the mouth, though boas, pythons, glass lizards and other snake species also have teeth on the roof of the mouth.

“This is a very special fossil and likely to become one of the most important found in the last few decades,” Whiteside said. It is fortunate to be held in a National Collection, in this case the Natural History Museum, London. We would like to thank the late Pamela L. Robinson who recovered the fossils from the quarry and did a lot of preparation work on the type specimen and associated bones. It was such a pity she did not have access to CT scanning technology to help her observe all the detail of the specimen.”

The complete paper, “A Triassic crown squamate” can be read on the open access Science Advances website.