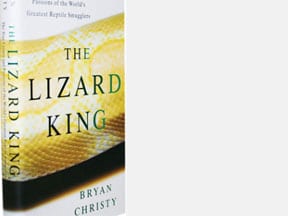 Recently, REPTILES magazine caught up with author Bryan Christy to talk about life after the release of his book The Lizard King. Within its pages, Christy tells the real-life story of former reptile smuggler Mike Van Nostrand and his once-nemesis agent Chip Bepler of the U.S. Fish and Wildlife Service.

REPTILES: What led you to write The Lizard King?

Eight years ago I was at a reptile show in Lititz, Pa., and overheard two men using words I didn’t recognize — het, double het, etc. — along with dollar figures that made me think maybe they were discussing custom cars: $25,000, $40,000 and up. Then I realized they were talking about the ball pythons I had kept in high school. I couldn’t believe it. The industry had changed since I’d given away my Burmese python 20 years earlier.

I thought a designer reptile story would make a good magazine piece. I never intended to write a book. Then I came upon the smuggling story of Mike Van Nostrand versus Special Agent Chip Bepler. When I heard how those two men went after each other, and how their story ended — in a mix of tragedy and honor — I knew it had to be a book.

R: What has the reaction been? Because the book focuses on the subject of smuggling, has there been any backlash, especially from people in the pet reptile industry?

BC: The month The Lizard King came out, Borders took a table at the 2008 National Reptile Breeders’ Expo, and I flew down to sign books. If reptile people hated the book, they were going to have a chance to tell me.

The response was 100 percent fantastic. I was signing all weekend. Twenty of the industry’s pioneer figures autographed a copy for the weekend’s gharial conservation benefit auction. The copy sold for $250! I’ve gotten letters from reptile-lovers and industry folks all over the world thanking me for writing a story that tells it like it is.

R: A number of prominent reptile industry figures, such as Kamuran Tepedelen, Brian Potter, Dave and Tracy Barker, Wayne Hill, Bill Love, Kevin McCurley and others are thanked in the acknowledgments section of The Lizard King. Do you know whether they all read and enjoyed the book?

BC: It’s a very long list of people who helped me over the four years I researched the book. Everyone I’ve talked to since has been extremely positive. Bob Clark called it possibly the best book he’d ever read (but I think he’s biased). Dave and Tracy Barker have a review coming out in the Bulletin of the Chicago Herpetological Society, so you can see their opinion in print. Bill Love did a review on Amazon.com.

The only complaint I’ve gotten from the reptile world so far was from Kamuran, who said I spelled his last name wrong. And Kim Bell complained I referred to her as “and wife.”

R: Why did the Van Nostrands agree to be willing participants in a book that describes their past smuggling activities?

BC: Mike Van Nostrand told me he considered his crimes to be in the past. He was young, and at the time running from agent Bepler was an adventure. It takes a strong character to share as much with me as Mike and his father did, and I respect them for it. I think Mike also recognized the book would honor agent Bepler, whom he and others came to respect.

R: Do you think the book could affect the pet reptile industry in any way, good or bad?

BC: I wanted to write a book that was itself a kind of reptile — something exotic and a little bit dangerous; something you could pick up, think about nature and enjoy. The more exposure people have to reptiles the better.

R: Some have argued that if it weren’t for reptile smuggling, some of the most popular pet species would not be available today, and because captive-bred specimens are more widely available, there is less need for wild-caught specimens, which takes the burden off wild populations. Yet laws were broken. What are your personal views regarding animal smuggling?

Bryan Christy:BC: One of the best pets in the reptile world, the Australian bearded dragon, would likely not be here if it weren’t for smuggling. On the other hand, smuggling has hurt Cyclura populations. Smugglers have broken into wildlife preserves in Madagascar and New Zealand to poach Geochelone yniphora, tuataras and other species right out of rescue facilities. The impact of smuggling varies species by species. Prolific species can benefit, but most species are protected because they are not prolific.

Scale is also important. There are some large-scale smuggling syndicates out there vacuuming up the wild. Wayne Hill suggested to me that rather than ban a species, we ought to give endangered reptiles to proven breeders and let them get the species started and into the pet trade. Fresh ideas like that are worth exploring.

Reptiles are one of the last animal groups we allow commercial operators to take from the wild in large quantity. Smuggling aside, we should work to reduce wild-caught reptiles. 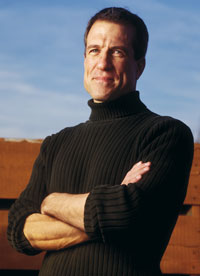 Christy originally intended to write a magazine article about designer reptiles, an idea that later led to his writing The Lizard King.

R: In her review of The Lizard King, Terri Jentz of The New York Times wrote, “Christy writes in an oddly lighthearted tone about the bigger, bleaker picture of the illegal commercialization of endangered wildlife.” Do you have a response?

BC: I wrote the story the way I found it. The smugglers thought of themselves as pirates, and they acted like pirates, too. I was confident the reader would bring that basic (and bleaker) knowledge to a reading of the book. Wildlife crime is a human problem, and it will only be solved by understanding the humans behind it.

R: The book could make a great movie, perhaps a la The Untouchables with Chip Bepler’s Eliot Ness to Mike Van Nostrand’s Al Capone. What actors could you see playing Bepler and Van Nostrand?

BC: That would be great! By the time this article appears, we may have some definite answers to this question. You heard it in REPTILES first!

R: Have you formed any new opinions regarding the reptile industry, or have past opinions been reaffirmed after writing the book?

BC: When I was a boy, you could bet that the worst-cared-for animals in your pet shop were the reptiles: green iguanas piled so high there were dead on the bottom, sliders in polluted tanks, etc. Today, husbandry has led to incredibly healthy reptiles. When I toured Mark and Kim Bell’s Reptile Industries, I couldn’t believe how well-kept the animals were. Same with Kamuran Tepedelen’s chondro breeding operations in Indonesia, Ralph Davis’ ball python facility, the list goes on.

The negative side of the reptile industry includes the selling of reptiles inappropriate to the average buyer. I’m thinking of the “hot” shows where I’ve witnessed teenagers buying rattlesnakes. Likewise, giant pythons, large monitors and anacondas, which grow too big, live too long and are too unpredictable for many of the people buying them.

This is not like the gun industry; there’s not enough money in the business to outweigh calls for regulation or bans. We’ve seen that in jurisdiction after jurisdiction. Dealers should develop hard policies and stick to them as an industry. It will cost some sales, but if it’s not done, it will close down the industry. With it will go the opportunity to interact with wildlife — the key to protecting it.

I also think the U.S. industry ought to use its market power to improve controls in source countries. The Lizard King could not have been written if there weren’t government corruption in the trade. Better, innovative protection could yield healthier wild populations and higher commercial prices.

R: Does anyone besides us think it’s a little weird that the title, The Lizard King, is superimposed over the back of an albino python?

BC: Hah! Yes, all the herp geeks! I said it, too, when I first saw the design.

The Lizard King is a crime story about Strictly Reptiles, nicknamed “The Iguana Kings,” but you can’t tell the story of reptiles today without the albino ball python. Besides, I love that cover.