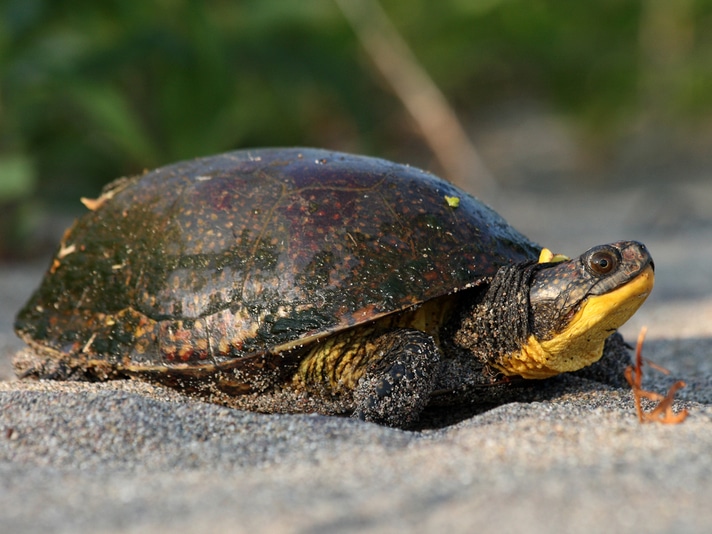 Here is a list of some of the most endangered reptiles in the world.

"Good riddance," thought Samuel with one hand briskly tossing a bucket of turtles over the boat's gunwale. Grabbing the oars and pulling a powerful stroke, he headed for shore feeling relief and a trifling of guilt. A few years ago, Samuel purchased the turtles without realizing how quickly they would breed and outgrow their housing. Long work hours, a new baby and a plethora of family commitments absolutely made keeping the turtles impractical. An unfortunate combination of ego and fears that someone might ask about the turtles' poor physical condition compelled Samuel to rationalize that releasing them in the wild was the best course of action. Samuel's egotistical actions resulted in the release of a potentially diseased, breeding population of red-eared sliders (Trachemys scripta elegans) into a South Dakota lake. The waterway, now infested with a highly invasive turtle species, is home to a struggling population of the endangered, Blanding's turtle (Emys blandingii). 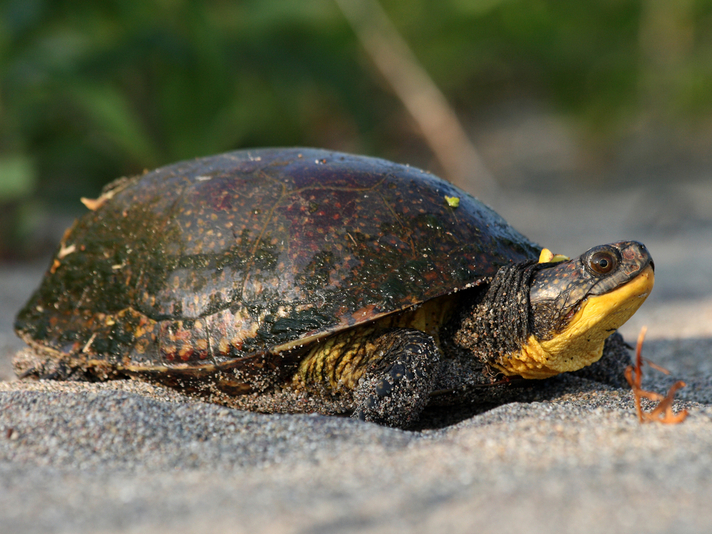 The Blanding's turtle is an endangered species throughout its range..

The preceding story was fiction however, similar but true episodes have caused untold ecological damage. Release of non-native species have wreaked havoc upon native populations of reptiles, amphibians, fish and plants. While human action has had tremendous detrimental effects, nature too has slowly contributed to the demise of many species due to loss of suitable habitat during ice ages, hurricanes and limited genetic variation.

The International Union for Conservation of Nature (UCN) publishes a list referred to as the 'Red List of Threatened Species' or simply the Red List. This list contains some of the most endangered reptiles and presents them in seven categories of interest: Least concern and near threatened, vulnerable, endangered, critically endangered, extinct in the wild and extinct.

It is certainly discomforting to look at the list of reptiles that became extinct in the past couple of hundred years. One can't but help wonder what it would be like to actually observe a living sample in their natural habitat. What is shocking to the conscience is to know there are actually reptiles and other plants and animals living in captivity that are completely extinct in the wild. Dedicated conservationists are hoping to reintroduce some of these species back into the wild.

Our most endangered reptile list begins with a species that is virtually extinct in the wild.

Black soft-shell turtles (Nilssonia nigricans) at one time roamed the Brahmaputra River and its drainage basins in Bangladesh. Currently, the population is maintained in a pond on the grounds of the Bayazid Bastami shrine which is located in the seaport city of Chittagong. Legend has it that the turtles are 13th century saints who miraculously became turtles, which explains the shrine's reluctance to let the turtles be removed from the pond even for conservation purposes.

Culebra Island giant anole (Anolis roosevelti) is listed as critically endangered and more than likely is extinct. A year-long biological study conducted in 2010 specifically looking for A. roosevelti resulted in no finds and recommended A. roosevelti be listed as extinct on the island of Culebra. A. roosevelti has not been seen on adjacent islands since the mid-1800's. The last confirmed Culebra Island sighting was 1931 followed by an unconfirmed sightings in the 1970's. It is speculated the observers actually saw an iguana rather than A. roosevelti. It is thought they fed from the fruit of ficus and copperwood trees which were cut while the island was developed.

The golden coin turtle (Cuora trifasciata) was hunted as an ingredient for a dessert called, 'Tortoise Jelly.' Although the species is commercially farmed, it is still listed as critically endangered. 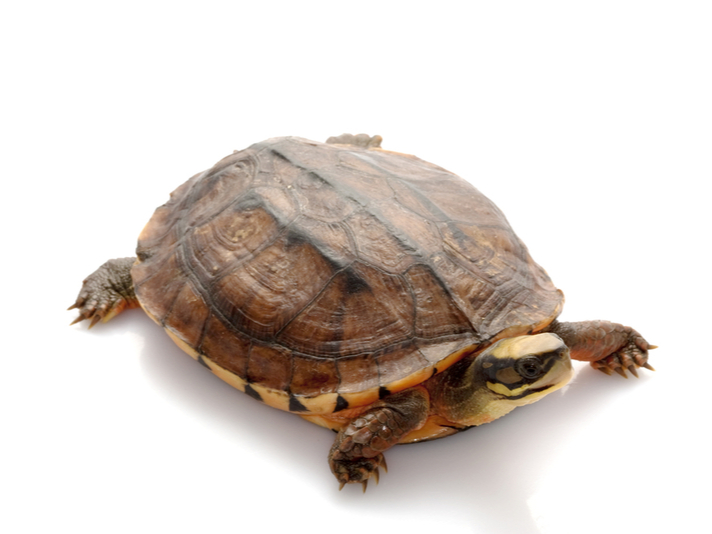 Although the golden coin turtle is commercially farmed, it is still listed as critically endangered.

Red-bellied racer (Alsophis rufiventris), called the Saba Racer, is endangered and found on the islands of Saba and Saint Eustatius which are part of the Lesser Antilles chain of islands. Originally found on several other islands, it was eliminated due to the introduction of the mongoose to control the snake population. Today, it is found on the two islands where mongoose were not released. I personally observed several of the swift moving Alsophis rufiventris in the rainforest on the Island of Saba.

Cuban crocodile (Crocodylus rhombifer) is a critically endangered and primarily resides in two, small areas of the country. The Zapata Swamp in the mainland's northwest area and in the Lanier Swamp located on the Island of Juventud. Habitat destruction and hybridization pose threats to survival. Conservation efforts show positive signs for recovery.

Ebner's Cylindrical Skink (Chalcides ebneri) native to Morocco is critically endangered or extinct. The last sighting was in 1970. 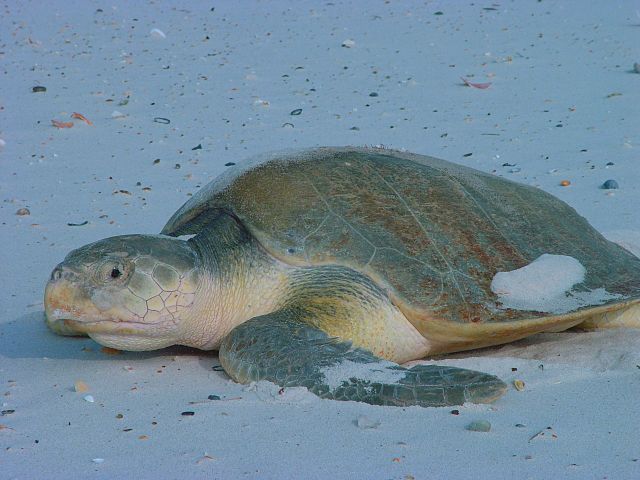 The smallest of the sea turtle's, the Kemp's Ridley is still struggling.

The Kemp's Ridley sea turtle (Lepidochelys kempii) continues to struggle even though hunting of its eggs are forbidden. Listed as critically endangered, the turtle population is threatened by loss of habitat, pollution and entrapment in sea life harvesting nets.

Baja California legless lizard (Anniella geronimensis) is a lizard that looks like a snake. It is classified as endangered. Road construction, agriculture pesticides and urban development strain the population.

Gharial (Gavialis gangeticus), is one of the largest crocodiles and is native to the northern regions of India. It is listed as critically endangered with a population estimated at just over 200 individuals. The average lifespan is estimated from 40 to 60 years. Males are hunted for the supposed aphrodisiac properties of their snout. Many are accidentally trapped and drown in fishing nets. 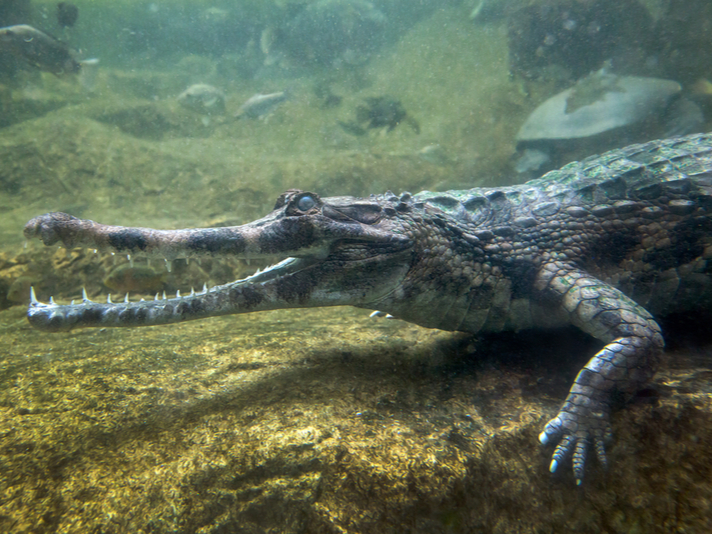 Gharial (Gavialis gangeticus), is one of the largest crocodiles and is native to the northern regions of India.

Good conservation efforts such as habitat restoration and restrictions on human predation help reverse the path to reptile extinction. However, conservation can quickly be thwarted by careless handling of pet reptiles. A case in point is the invasion of the Veiled Chameleon (Chamaeleo calyptratus), a Yemen and Saudi Arabian native, that is invading the Hawaiian island of Maui. This rapidly reproducing invasive species preys on native Hawaiian birds, insects, flowers and small mammals. Sadly, more than 100 specimens of this invasive chameleon were also captured in Florida. In both cases, these non-native animals were illegally and despicably released into the wild. Hopefully, as a reptile enthusiast, you will join the conservationist efforts to preserve our endangered species. Enjoy your reptiles!