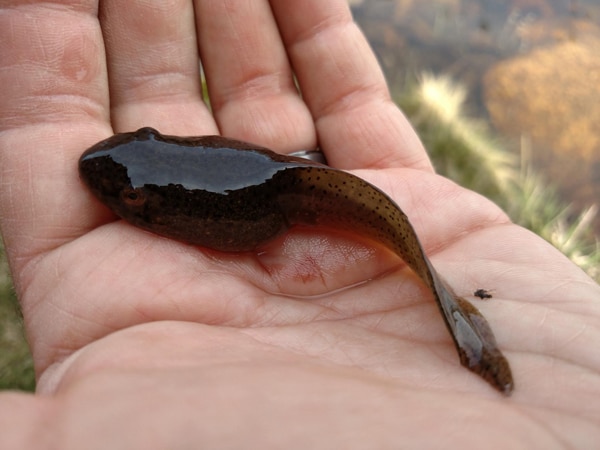 Natural History And Captive Care Of The American Bullfrog

The American bullfrog is an icon in the hobby.

As far back as I can remember, for me the American bullfrog (Rana catesbeiana) has been an iconic figure of the long drawn out summers of exploration and herp hunting on Cape Cod where I was raised. No matter how boring and how hot it became during the day, I could still always follow that low toned, deep bellow sounding off in the distance keeping in time with the ominous buzz of cicadas, back to the local swamp. I would often sit and ponder, net in hand, just how I could actually catch one of these bullfrogs that always seemed to have their own specific personal territory. 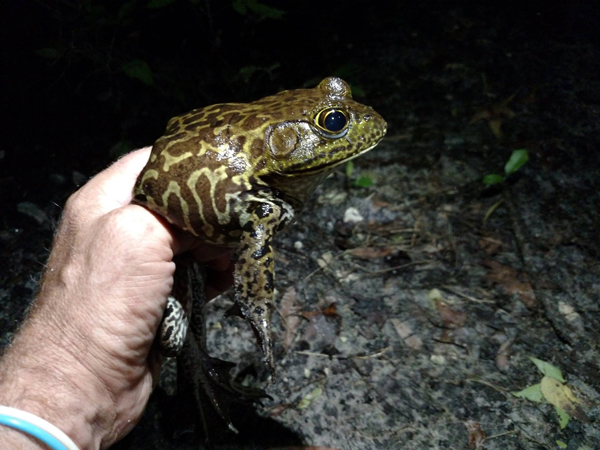 The American bullfrog is a true invasive species and it is illegal to own in some states outside of its natural range.

Perhaps it was the smaller size of my youth, but the bullfrogs just seemed so much bigger and craftier back then, firing themselves into the water at my first appearance.

I recall after much patience, finally landing a large male bullfrog in my net and having the net pulled right from my fingers as the frog tried to escape. I did retrieve this specimen and marveled at just how strong it was and how much effort actually went into holding its slimy body!

First described and scientifically named Rana catesbeiana in 1802 by English Zoologist George Shaw, the American bullfrog is the largest native frog in the United States, with adults growing to about eight inches. Modestly colored, it appears in shades of green or green with a brown camouflaged pattern and sports a brilliant white belly that is sometimes mottled in black, gray or brown. There is some degree of sexual dimorphism in adult bullfrogs. The male bullfrog is an intimidating creature with powerful rear legs, short stocky forearms and an enormous belly. Male bullfrogs have tympanic membranes notably larger than the eyes and a bright yellow throat and arm pit area. Females tend to be quite a bit smaller in stature with little or no yellowing and a much smaller tympanic membrane which is similar in size to the eye. One truly obvious feature of both American bullfrog gender is the enormous mouth which is ready to take on anything that happens to be careless enough to move in front of it! Their jaws are lined with bony tooth-like structures which enable the frogs to grip even the most slippery of prey items. Both males and females are equipped with extensively webbed feet that enable quick getaways and dub bullfrogs as true kings of their watery realm.

Widespread across North America it can be found in suitable wetlands from the East Coast to West Texas north to the Great Lakes region. They are found naturally in at least thirty six states primarily to the east and have been introduced into all but a couple of the other states outside of its natural range. The American bullfrog is a true invasive species and it is illegal to own in some states outside of its natural range.

American bullfrogs rely heavily on their great sense of hearing, vision and strength to escape from would be predatory attacks. Their body is covered in a heavy slime or mucous covering which not only prevents desiccation, enabling them to stay out of the water for long periods of time but also acts as a barrier against unwanted micro-organisms and aids as an escape mechanism if the frog is grabbed. Although they rely strongly on other means of defense, the bullfrog is capable of packing a pretty powerful bite, however unlikely that may be. Powerful back legs propel the American bullfrog through the air, sometimes at great distances into the water or enables great leaps across the ground with remarkable speed to reach the water.

The American bullfrog is an early riser in the northern parts of its range. After a period of hibernation beginning in mid-fall (October into early November) and ending in late winter (March and April) the American bullfrog awakens once again with a tremendous appetite and often times this awakening concides with the heavy rains of early spring. It is during this period of heavy rain that the spotted salamanders and wood frogs awaken to breed at night in vernal woodland pools along with other cold blooded animals such as spotted turtles, Spring peepers and even snapping turtles. Many of these early risers are potential food items for a hungry American bullfrog and the author has found bullfrogs the following day so engorged on Spotted salamanders that they protrude from the frog’s mouth. Bullfrogs can and will eat virtually any living animal that it can overcome. 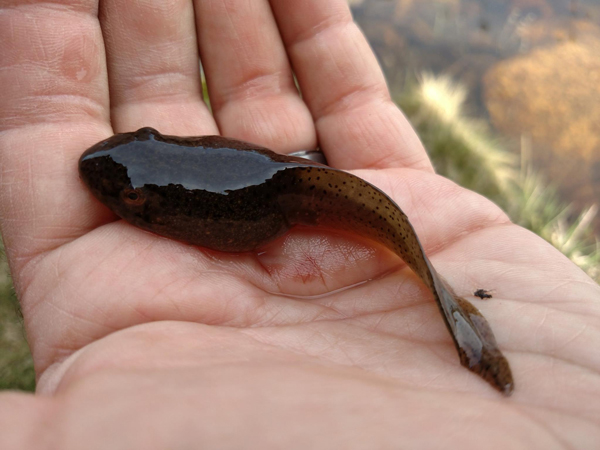 Metamorphosis may occur anywhere from a few months to a few years depending on the bullfrog tadpole’s geographic location.

Reproduction typically occurs in late spring (late May to early June) and throughout the summer in the northern states and typically runs from February through October in the southern parts of its range.

Male American bullfrogs are territorial and will occupy an area within 10 to 20 feet of a rival male, calling females to his location with his deep, throaty call. Receptive female bullfrogs will allow a male to engage in amplexus at which time he will fertilize her 20,000 or so eggs externally. Bullfrog eggs hatch usually within three to seven days depending on water temperatures and tadpoles will thrive on aquatic algae. Metamorphosis may occur anywhere from a few months to a few years depending on the bullfrog tadpole’s geographic location. American bullfrogs develop quicker in the warmer waters of the southern states.

The American bullfrog is one of the first species many young, future herpers keep due to their familiarity in nature and availability. Captive maintenance of the American bullfrog can prove to be quite challenging however to all but the most dedicated of keepers and many frogs perish soon after acquisition usually due to stress related illness or trauma. American bullfrogs collected in nature do not typically fare well in the standard glass aquariums often provided for them and require much larger, roomier enclosure which will enable them to swim, climb and hide with ease. In glass enclosures, wild caught frogs often damage themselves while trying to escape through the invisible barriers which keep them contained and no matter how badly damaged the bullfrogs become, they continue to try escaping through the glass. Stress due to constant escape attempts can be curbed by working with either captive bred animals or individual frogs collected very young. It is crucial to keep American bullfrogs in clean, fresh, oxygenated water which can be achieved by purchasing an appropriately sized canister filter. Although bullfrogs enjoy sitting outside of the water where they can monitor the world around them, it is not necessary to use full spectrum lighting with them.

Smooth stones or nothing at all is best on the bottom of your frog’s enclosure and it is important that cage décor is free from exposed wires or sharp edges which can damage your frog’s tender skin. One of the downfalls to keeping American bullfrogs is that it is usually best to keep a solitary frog. Unless your enclosure is large enough to allow reasonable territory for males, there will be combat and stress related illness. Males can be kept successfully with females however, close attention should be paid to the size of your captives as even a slightly smaller frog can easily become food for a larger, more aggressive frog!

Captive breeding is usually achieved by mimicking a natural winter cycle for your frogs, allowing your animals to gradually become cold enough to hibernate. After a winter cooling of a few months, frogs are brought out of hibernation and allowed regular feedings once again. Rainy spring weather typically stimulates your frogs into a breeding mode and males will begin to call females. Captive breeding is typically done in areas where frogs can be kept outdoors year round within their natural range where they are farmed for the pet trade and food industry. Although not a lot of work has been done in the area of producing morphs, some bullfrog farms are producing a beautiful bright yellow, albino form of the American bullfrog which is readily available in the pet industry.

If you choose to keep American bullfrogs as pets, be mindful of state laws regarding their possession and save yourself a world of headaches by obtaining necessary permits if available, before acquiring your animals!