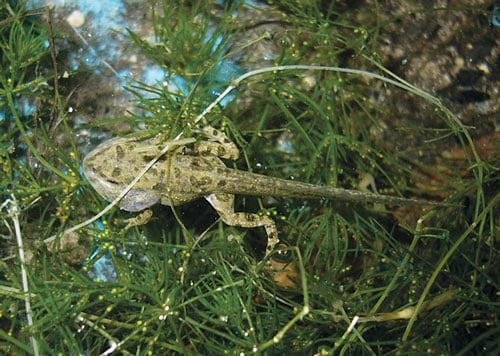 Dark gray and round, tadpoles of the European green toad (Bufo viridis) reach a pretty large size at the end of their larval stage. I measured some Sicilian green toad tadpoles, and I recorded a maximum length of 1.6 to 2 inches at the completed-legs phase. After that, metamorphosis starts. The tail is reabsorbed and used as nourishment while the tadpole’s shape and color become more like the adults. 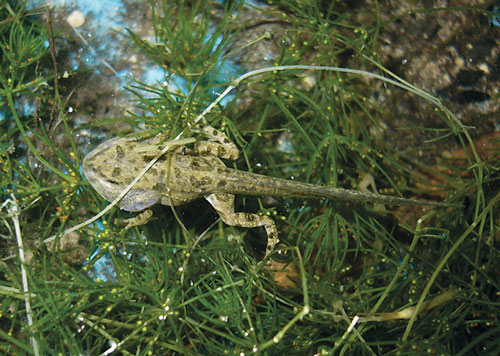 Once the legs have finished growing, the European green toad’s tail is then reabsorbed and used for nourishment.

This process takes two to four days. Very shallow water and a little piece of land are necessary at this delicate time because the toad’s lungs soon substitute for its gills. Water that is too deep could lead to the toad drowning.

If conditions are optimal — a constant source of water results in a more or less constant level — Bufo viridis tadpoles are among the slowest European anuran tadpoles to metamorphose. They can take up to three months. If conditions are bad — the water temperature and salinity are too high — metamorphosis can occur much earlier. The salt content increases when water evaporates, so B. viridis tadpoles are urgently forced to metamorphose.

On the other hand, European green toad tadpoles can stop or slow their growth if the number of other tadpoles in the water is too high. A hormone they produce stops their growth, and this avoids overpopulation.

You can speed larval development in captivity by placing metamorphosing individuals on top of a hot terrarium. Pay attention to the temperature; it should never be more than 80 degrees Fahrenheit. Refill water that rapidly evaporates. Anywhere from three to a maximum of seven days after metamorphosis, Bufo viridis toadlets become terribly greedy. They accept everything offered to them on a stick. The toadlets’ length is around a half inch and the width is about one-fourth inch, so the size of their food should not exceed a one-fourth-inch-long mealworm.

Toadlets’ dorsal color is similar to that of the adults from the very first day. Their skin possesses few tubercles, and it remains very smooth for several months after metamorphosis.

Little European green toads are very smart. When you move or touch their tank, they jump in search of shelter, but when you open the top and introduce a stick with food, they immediately run toward you.

Using a stick to feed them can be a useful trick because as the toads grow into adults, they will continue to accept food in this manner. However, this trick is much more difficult if you try it with adults that have never been fed this way before.

One of the greatest problems to threaten Bufo viridis and other amphibians is the use of pesticides. Fields, market gardens and farms are some places where these amphibians thrive in Europe. Unfortunately, these are also the places where pesticides are used most often.

Another big problem is the carnage that occurs each spring. Green toads migrate from open spaces to breeding ponds, and many die while crossing roads.

In some European countries protective measures have been taken. Volunteers and associations erect fences on each side of the street to prevent the toads from crossing. Tunnels are also constructed. One is every few feet, so toads can get to the other side of the road. Good results have been accomplished with such methods, and mortality is lower than before. It would be nice if other countries adapted such efforts as they do for Bufo bufo and B. viridis in Germany, Holland, Belgium, Britain and northern Italy.