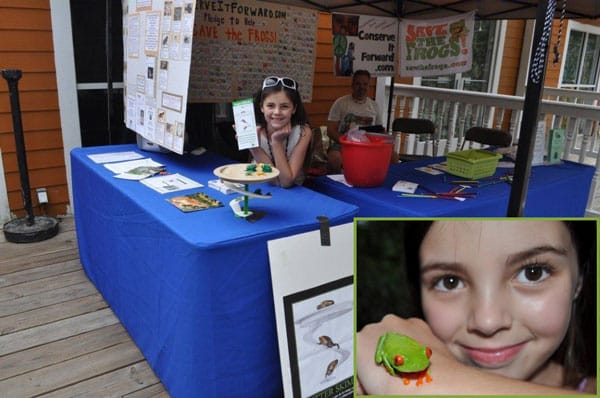 Florida girl conducts presentations on frogs and their importance to the environment.

An 11-year-old Florida girl who loves frogs has been named one of 10 winners of the Gloria Barron Prize for Young Heroes. Avalon Theisen from Tampa, Florida won the prize for her advocacy work on behalf of frogs and the environment. According to Tampa Bay Online, Theisen conducts presentations on frogs, raising frog awareness and discusses the need for conservation efforts of these amphibians. She also organized a Save the Frogs Day and makes and sells bottle cap magnets that have environmental themes, donating the proceeds to environmental causes.

Frogs are really cool, Theisen told TBO. They are very cute and always kind of interested me, she said.

Theisen is quite the expert at her young age. She has attended frog-listening workshops and can identify frogs based on their calls, and is aware that frogs are keystone species in their environments, mindful that these animals serve as barometers that help researchers determine how healthy their environments are. St. Petersburg wildlife biologist George Heinrich, who has taught the home-schooled Theisen biology for the last four years says she is like a sponge and likes what he sees. She takes what you teach her and runs with it, he said.

So what's in the future of this Young Hero? "I love sharing what I learn with others," she told TBO, and would one day like to work for Animal Planet or National Geographic.

The Gloria Barron Prize for Young Heroes is awarded to children who take an active role in helping the environment. It was founded in 2001 by author T.A. Barron in honor of his mother.