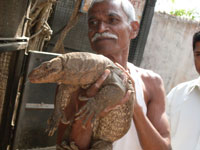 Monitor Lizards Still Being Sold In Fish Markets In India

Despite protections enacted in 1972, selling of Varanus bengalensis still occurs.

India's Bengal monitor lizard (Varanus bengalensis), a species that has been protected in India since that country's passage of the Wildlife Protection Act of 1972, is still being sold in local fish markets in the town of Machilipatnam, India, according to Indian newspaper The Hindu. When a cameraman from the newspaper began taking photographs of the caged lizards, the poacher who brought them to the market fled, leaving behind a cage full of live lizards.

The Hindu contacted Machilipatnam's divisional forest officer who said that the department will take action against any person killing monitor lizards. Local Indians believe that the flesh of the monitor lizard helps to treat hip and back aches, and is also considered an aphrodisiac, according to the paper. The large lizard, called udumu in the local language, is classified under CITES Appendix I as threatened with extinction. According to the paper, the lizard is being sold in the market for Rs 1,000 or about $US 18.00.