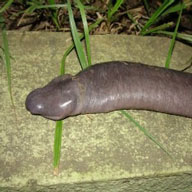 A snake-like amphibian dubbed the floppy snake has been discovered in a drained river in Brazil that news reports, and especially British news reports say looks like a human male sex organ. The eyeless amphibian, Atretochoana eiselti was found in November 2011 at the bottom of the Madeira River in Rondonia state in Brazil by energy workers with San Antonio Energy who were working on a dam project, according to a report in the Los Angeles Times.

It was recently confirmed as a new species. In total, six specimens were collected, of which one died, two were kept for scientific studies and three were released back into the river in which they were found. The floppy snake is actually part of the Caecilian family of amphibians. It does not have any limbs or lungs, has smooth skin, sealed nostrils and an enlarged mouth. Little is known about what it eats or how it reproduces.