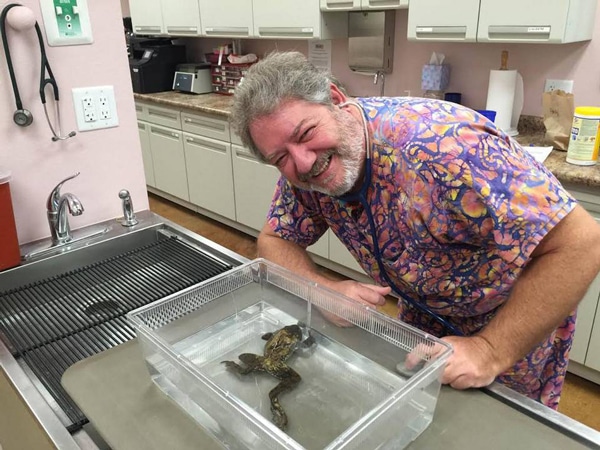 The frog was hit by a vehicle which injured its back.

A bullfrog that was hit by a car in D'Iberville, Miss. was brought to veterinarian Dr. James Askew of Happy Tails Animal Hospital, who performed back surgery on the amphibian, and now it is doing well, according to the SunHerald.

Jeremiah (he is a bullfrog) was first brought to Wild at Heart Animal Rescue by a postal carrier. When  but the rescue's Missy Dubuisson saw the frog, she knew they had to get him to a hospital, but there was one issue, Dubuisson is scared of frogs.

"I am scared to death of frogs — terrified of them," Dubuisson told the paper. "I'm not even kidding." Dubuisson said that she couldn’t let her fear of frogs, called ranidaphobia get in the way of Jeremiah receiving treatment, so she enlisted the help of her mother, who is a frog fan.

"The frog's back was broken and it was clear that it needed help," she said. "I told my mom that I wasn't going to touch the frog but we had to get it to Dr. Askew." "My mom loaded up the frog and took it to D'Iberville," she said.

Dr. James Askew kept Jeremiah overnight for observation and then the next day, he performed a spinal fusion surgery on the frog, using a wire to fuse the frog’s spine.

"It's the same procedure that would be done on a human, but I did it on a frog," Askew told the paper. "I don't know of any other surgeon that has performed this type of surgery on a frog and I wanted to see if I could do it."

Askew, who has teased Dubuisson about her fear of frogs for 10 years, says Jeremiah is doing well and is feeding. The frog will need some rehabilitation, but Dubuisson says it will have to go elsewhere.