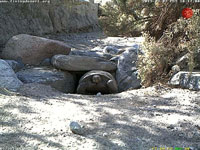 Maxine Emerges and Spring is Here

A desert tortoise (Gopherus agassizii) named Mojave Maxine left her underground burrow, which means that spring has arrived, according to reptile keepers with the Living Desert in Palm Desert, Calif. where the tortoise lives. "Never mind the East Coast's groundhog Punxsutawney Phil, the West Coast has the Living Desert Zoo's Mojave Maxine, the desert tortoise, and she's emerged from her burrow to make it official: Spring is here! Take that, Punxsutawney Phil!" Living Desert officials said in a statement March 11.

Each year officials at The Living Desert wait in anticipation for Mojave Maxine to emerge from her burrow. This year, more than 900 students from nine counties in Southern California entered a contest sponsored by The Living Desert and the Desert Management Group to guess when the desert tortoise would emerge from her burrow. Students from each of the nine counties who correctly guessed the date received $50 gift certificates as well as Mojave Maxine t-shirts for their entire class. Officials with the Living Desert said that educators in the region say the endeavor is a great way to teach students about the desert environment where Mojave Maxine and other animals and plants call home. It also brings awareness to the Mojave desert tortoise, a protected species.

“Mojave Maxine creates a double thrill for us at The Living Desert,” Peter Siminski, Director of Education and Conservation said. “It's exciting to have so many young kids be enthusiastic about desert wildlife and participate in the contest, and it's always fun for us too, to see when Mojave Maxine will peak out of her burrow and slowly make her way onto the desert landscape in search of fresh flowers.”

The desert tortoise is a protected species within its entire range, which includes the Mojave and Sonoran Deserts of Southern California, southern Nevada and Arizona. The desert tortoise grows to about 8 to 10 lbs. and in the wild feeds on weeds and broad leafy weeds, as well as grasses and some insects. It is speculated that there are more desert tortoises in captivity in California than in the wild. The practice of acquiring them while out on desert excursions in the 1970s and 80s has declined with the assistance of educational programs, although some of those tortoises acquired during those decades are still in the care of the families that acquired them.