Geoemyda japonica has been found in pet shops in China and Hong Kong.

Japan's Ryukyu black-breasted leaf turtle (Geoemyda japonica) is so rare that the country has asked the Convention on International Trade in Endangered Species of Wild Fauna and Flora (CITES) to list it as a protected species under Appendix II. According to a report in AsianScientist, Japan asked CITES to list the animal after it was discovered for sale in mainland China, Hong Kong, and via the Internet. The report says that this marks the first time Japan has requested an animal native to Japan to be listed. Under Japanese law, the Ryukyu black-breasted leaf turtle has been designated a national monument, which prohibits the capture, transfer or trade of the species without permission of the Commissioner of Cultural Affairs of Japan. If CITES accepts the request, the turtle would receive better protections against the illegal international pet trade. 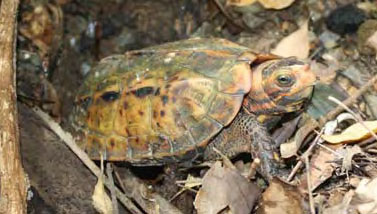 The proposal to list the chelonian as a protected species came about after Traffic.org, the wildlife trade monitoring network, did market surveys in China and discovered 31 Ryukyu black-breasted leaf turtles in two Hong Kong pet stores. Several more pet stores in Guangzhou reported to TRAFFIC that they received requests for the turtle. In addition, Traffic discovered three other reptiles endemic to Japan for sale in China: the Ryukyu Yellow-margined box turtle, Kishinoue's giant skink, and Kiroiwa's ground gecko.

Turtle Rescue Facility Opens on Road to China in Myanmar

Geoemyda japonica can only be found in the wild on three small islands in Japan's Okinawa group of islands. It lives on damp forest floors and along the banks of mountain streams and eats plant buds, nuts, berries, insects, earthworms and land snails. The turtle is also bred in captivity, hatching one to two eggs at a time, more than once a year. It was listed as Threatened II in Japan's Red List 2012 and Endangered in the IUCN Red List in 2000.