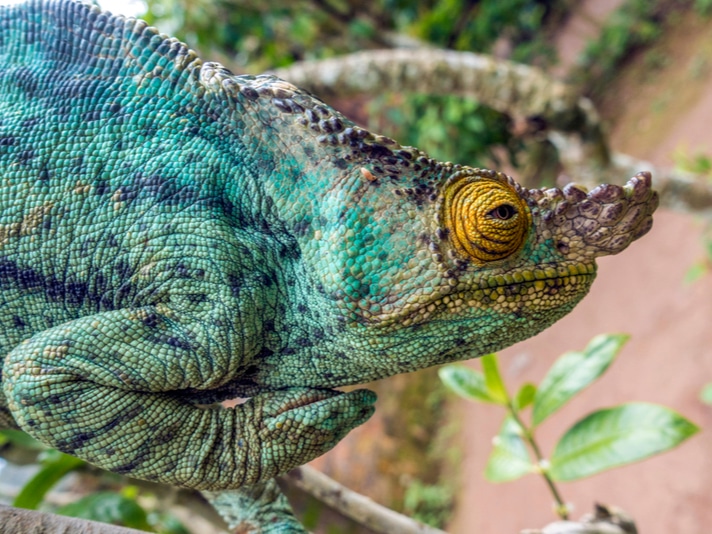 8 Interesting Reptiles And Amphibians Of Madagascar

Madagascar is home to some of the most uniquely adapted reptiles and amphibians of the world.

Madagascar is home to some of the most uniquely adapted reptiles and amphibians of the world. Many of these species are isolated even further to specific areas within the island. Sadly though, Madagascar has severe poverty and dire economic issues, which results in such practices as slash and burn agriculture, the illegal pet trade and the bush meat trade, which are rapidly destroying and threatening the forests and many species that call the forests home, with extinction. Although there are no simple solutions to solve the ecological and economical complexities of this island nation, here we aim to help raise awareness for Madagascar and its unique life by showcasing some amazing reptilian and amphibian representatives who depend on this place as their only home.

The island of Madagascar has a unique snake population, where it lacks pythons (found on the rest of Africa), and has only boas and rear fanged snakes. “Rear fanged” or Opisthoglyphous snakes means that they belong to the colubrids, which can be venomous or non- venomous. Madagascar is not the only place in the world that has rear-fanged species, but it has unique species of this type found nowhere else. 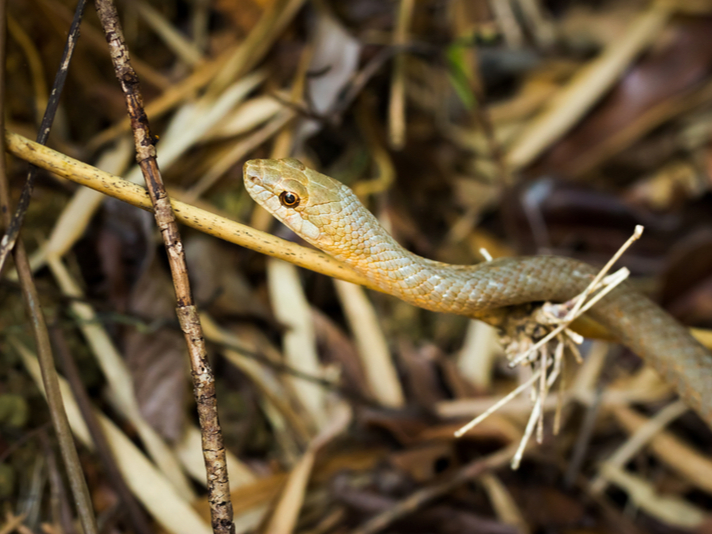 ​Introducing this colubrid group is a snake the locals call the spearheaded fandrefiala (Ithycyphus miniatus). It is an arboreal species that lives in the trees and loves to feast on bird eggs and tree dwellers such as chameleons. The natives of Madagascar (Malagasy) often relate their wildlife to folklore, and this species is said to hypnotize humans with a gaze after it drops from the canopy to spear you with its pointed head. It has remarkable climbing capabilities, and of course, isn’t out to kill humans. 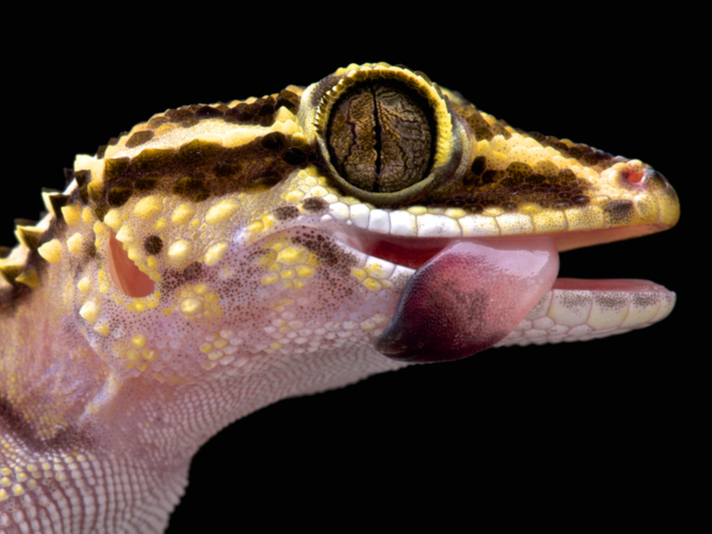 The Lotharas gecko (Paroedura lohatsara) sports cryptic markings to perfectly blend with the leaf litter in which it hides.

Many of Madagascar’s reptiles adapted to a life of isolation using camouflage, like the Lotharas gecko (Paroedura lohatsara) which utilizes its cryptic markings of brown and striping to perfectly blend with the leaf litter and trees of the forest. It must always keep a watch though, for its competitors, and predators, may utilize this same strategy of blending in. Many of Madagascar’s geckos are popular in the hobby and are widely captive bred.

If blending in isn’t their preferred survival choice, disappearing completely might be. The Madagascar blind snake (Xenotyphlops grandidieri) is a unique species representing a group of 15 subspecies in Madagascar. Related to the worm snakes in other parts of the world, it played the best game of hide and seek where it was unseen for a century, but was excitingly rediscovered in 2007. This subterranean reptile spends its life underground, where it uses its keen sense of smell to be the only known snake species to feed exclusively on insects and larvae. It is critically endangered with an unknown population number, and is listed as an EDGE (Evolutionarily Distinct and Globally Endangered) species on the brink of extinction. 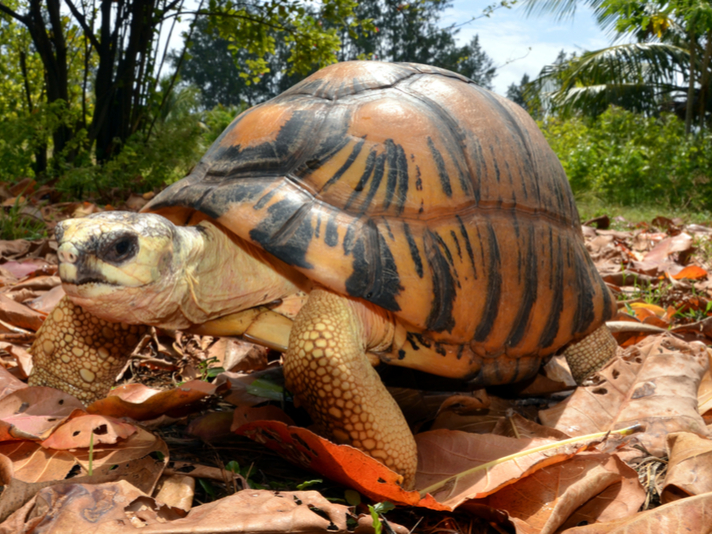 The radiated tortoise (Astrochelys radiata) is a critically endangered chelonian that has remarkably beautiful star patterns unique to each individual.

Whereas some species hide, others were born to stand out. The radiated tortoise (Astrochelys radiata) is a critically endangered chelonian that has remarkably beautiful star patterns unique to each individual. Like a snowflake or fingerprint, no two patterns are the same.

Captive assurance colonies throughout the United States seem to thrive, but slash and burn agriculture, the illegal pet trade, and bush meat practices (hunting them for food) are drastically decreasing this species in the wild. 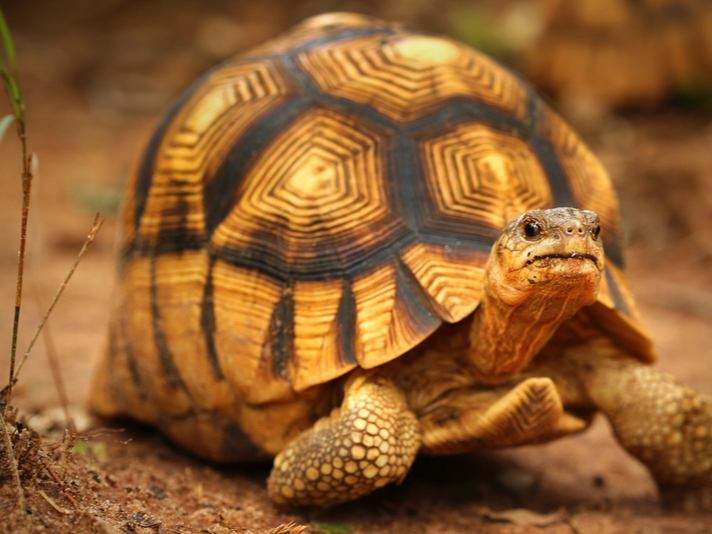 The ploughshare tortoise (Astrochelys yniphora) is endemic to Madagascar.

A second remarkable tortoise species that calls Madagascar it’s only (wild) home, is the ploughshare tortoise (Astrochelys yniphora), cousin of the radiated tortoise. Extremely rare in the wild and in captivity, this is one of the most endangered tortoises on the planet. Its round shape and “gular scute” at the bottom of its plastron define it as a beautiful and larger species of tortoise that desperately needs captive breeding programs to save it. Deforestation and the illegal pet and bushmeat trade are rapidly decreasing this species’ numbers. 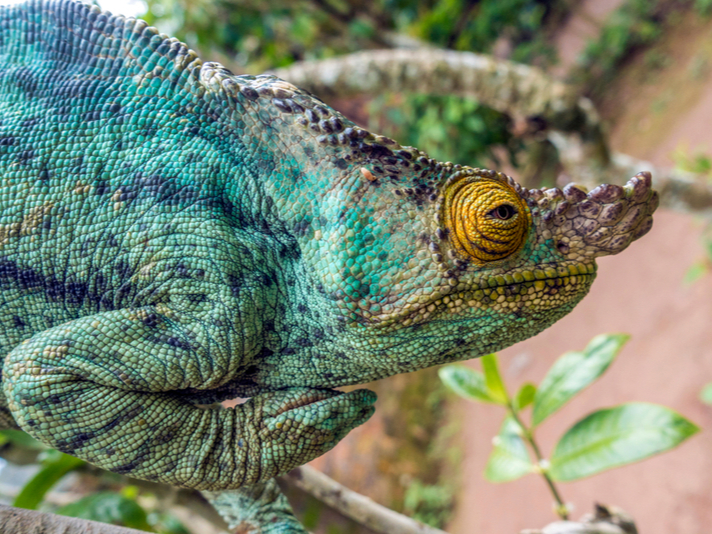 The Parsons chameleon is one of the largest chameleons in the world, and has become established in other areas as a non-native species, like Florida.

Of all the species of chameleons in the world, more than half are found exclusively in Madagascar. To represent the chameleon group, the Parsons chameleon (Calumma parsonii) is one of the more popular species. This reptile is one of the largest chameleons in the world, and has become established in other areas as a non-native species, like Florida. This omnivorous-insectivore enjoys a life among the trees just like the other chameleon species within isolated humid pockets of the island. Like the other chameleon species, they have fused toes to climb and a prehensile tail that can be used as a fifth limb if necessary. They are readily available in the pet trade throughout the U.S. and are listed as near threatened by the IUCN (International Union for Conservation of Nature).

Perhaps one of the most mysterious endemic Madagascar species is the orange cave-dwelling dwarf crocodile (Osteolaemus tetraspis). It is the only cave-dwelling crocodile species known, and it lives a most unusual life that still perplexes biologists. It lives in pitch black darkness, underground, soaking in guano (bat droppings) where it has adapted to eating crickets and bats exclusively during nocturnal hours. It is believed that juvenile crocodiles are able to leave the caves via tunnels, but once they become adults they are trapped in this dark paradise forever where they are eventually turned orange by these strange and unique conditions. 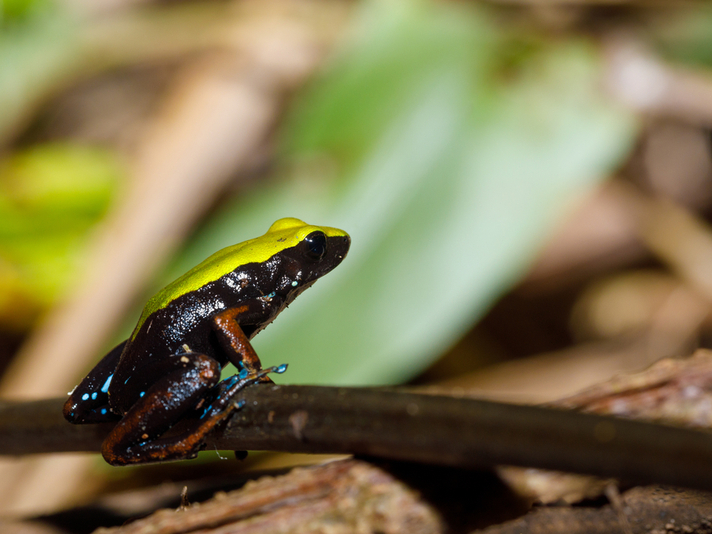 The climbing mantella (Mantella laevigata), is the only non-terrestrial Mantella species. It uses its large toe pads to climb into holes and bamboo wells to live and breed.

Another unique aspect of this biodiverse island nation is that its only amphibians are frogs, where 99% are endemic. There are no newts, salamanders, or even toads. For example, the 16 species of Mantella frogs are popular in the pet trade and closely mimic the poison dart frogs of Central and South America.

To get even more unique, the climbing mantella (Mantella laevigata), is the only non-terrestrial Mantella species which uses its large toe pads to climb into holes and bamboo wells to live and breed.

Like with many other reptiles and animals in Africa, deforestation, the illegal pet and bush meat trade are rapidly reducing the numbers of critically endangered, endemic Malagasy species. Island species are at a higher risk of extinction due to the risks of catastrophic natural disasters, invasive diseases and invasive species. Through awareness, appreciation, captivity,  ecotourism, and conservation programs, preserving the biodiverse species of Madagascar is a top priority for reptile and amphibian conservation.