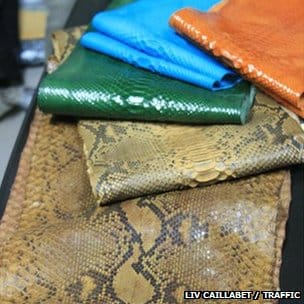 Gucci is working on a system to track python skins from "marsh to market."

What were members of the Gucci fashion house doing at the 16th meeting of the CITES Conference of the Parties in Thailand that concluded March 14? BBC News is reporting that the Italian fashion house, known for everything from high dollar purses and watches, to shoes, clothing, luggage and virtually every fashion item in between, attended the conference in an effort to drum up support for a monitoring system for python skins.

The report said Gucci's fashion mavens were conducting meetings in an attempt to improve the traceability of python skins that the company uses in its bags and shoes. The company is apparently concerned that illegally sourced python skins are making their way to the market and end up being sold to customers in the form of high dollar shoes and bags. 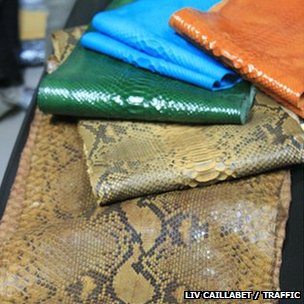 The report said Gucci is working on a pilot project in an attempt to create a closed-loop farm system, where all movement of a python destined for the fashion house's designers is tracked and traced. The key according to Don Ashley, who is working on a report to ensure pythons can be traced, is for an effective python tracking system to be put in place and for everyone participating in this type of trade to participate, which would be a challenge. "If other countries don't require a skin to be tagged, it opens up the opportunity for an illegal skin to come in and be co-mingled with legal skins and be re-exported," Ashley told BBC News.

Most python species are listed under CITES Appendix II, meaning that their trade is restricted and regulated. The International Trade Centre reports that 500,000 python skins with a value of $1 billion are exported every year to the European fashion industry. Big breeding facilities exist in countries such as Vietnam, Indonesia, and Thailand to support the market.