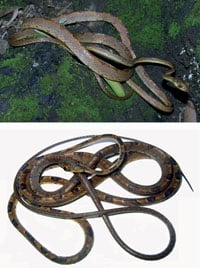 First Case Of Siamese Twins In Varanus Melinus Reported
This Prehistoric Turtle Had A Nose Only A Mother Could Love
Reticulated Python From Kansas City, MO Is World’s Longest Snake

A new species of vine snake that features bulging eyes and a super thin body has been discovered in the Chocóan forests of northwestern Ecuador. The blunt-headed vine snake (Imantodes chocoensis), was discovered in April 2007 by zoologists led by Dr. Omar Torres-Caravajal of the Museo de Zoología QCAZ, Pontificia Universidad Católica del Ecuador.

According to a report in Scientific American, Torrez-Carvajal and his colleagues described the snakes from several live individuals as well as several preserved (and previously unidentified) specimens that were found in Ecuadorian and American natural history museums. Their paper, "A new species of blunt-headed vine snake (Colubridae, Imantodes) from the Chocó region of Ecuador" was published in the Open Access journal Zookeys.

The blunt-headed vine snake grows to about 42 inches in length and can be found in lowland evergreen forests. It has a whitish underbelly with copper, brown and black hues on its back. The bulging eyes of this nocturnal snake help it to locate its prey, which includes frogs and lizards.

According to the paper, Imantodes chocoensis lacks a loreal scale, which all snakes in the Colubridae family possess. The region in which the loreal scale usually resides is occupied by a single preocular scale and a pair of postocular scales.

The full paper can be found here.