Dino The Nile Monitor Still On The Loose In Woodland Park, Colorado
After Europeans Arrived, 1/2 of Guadeloupe Islands Snakes And Lizards Went Extinct
What Would You Do if a Monitor Lizard is Knocking at Your Front Door?

A Maryland company has received more approvals to construct towers for a wind-based electricity generator in Arizona that would be located within a conservation management area in which the flat-tailed horned lizard (Phrynosoma mcallii) lives. According to a report in the Yuma Sun, the San Luis City Council has approved several amendments submitted by the Clean Wind Energy Project over the years, including this last one that enables the company to build the towers in the city. 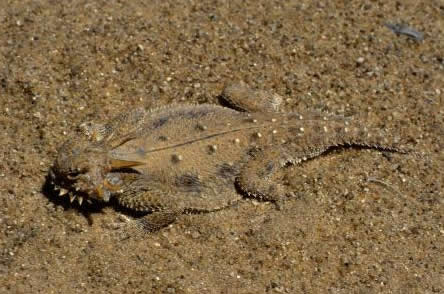 The Clean Wind Energy Project would sit on a site of more than 1,700 acres of federal land that the company has proposed leasing from the U.S. Bureau of Reclamation. If approved, the towers would use desalted water pumped in from the Sea of Cortez to cool the hot air that would drive the turbines that generate electricity.

The U.S. Fish and Wildlife Service determined in 2011 that the lizard does not need protections under the Endangered Species Act. The horned lizard, which has been proposed for protections under the Act four times since 1993 but has not been listed, can be found in southeastern California, southwestern Arizona and northern Mexico. It feeds exclusively on harvester ants and is illegal to collect in California and Arizona.