Naked and Afraid contestant kills lizard and then yells "Take that Madagascar."

Shock value is in play now more than ever on the seemingly endless number of reality shows that are on cable television these days. Indeed, animal-based reality television has gone in a different direction since the demise of "The Crocodile Hunter." While Steve Irwin always had great respect for the animals he showcased, and released the animals on his show after showing them to the viewer, other shows take different approaches, and some shows that feature animals show complete disregard for them.

Take the Discovery Channel show "Naked and Afraid." The premise is to let loose two Americans into a remote part of the world, (in the current episode the island nation of Madagascar) naked and presumably, afraid. They have to "hunt" in order to survive for 21 days, naked and with just one tool or implement to help them survive. In the next episode, which airs March 21, the contestant, "Jeff" is in what he calls an epic battle with a lizard, hitting rocks onto another rock in an attempt to scare the lizard out of its hide.

He then sees the poor lizard's tail and then grabs it, holding it up in triumph, and then in what Entertainment Weekly called his excitement, bites off the head of the lizard, which appeared to have taken tremendous work as he spent more time trying to chew the head off than bite it. He then spits out what he bit off in a show of triumph, displays to the camera what appears to be the dead lizard in his hand and yells, "Take that Madagascar!" Was the lizard that Jeff dispatched for the shock value a threatened species as listed by the IUCN? 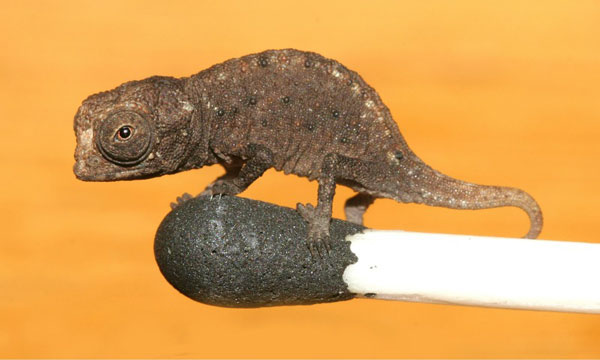 That is not good for the poor lizard and the other animals of Madagascar that had the dubious distinction of being treated as disposable props. Is this type exposure good for Madagascar, which is a biodiversity hotspot? More than 80 percent of the island nation's plant species are endemic to the island and there are more than 260 reptile species on the island. It is home to 2/3 of the world's chameleon species, including Brookesia micra, a chameleon so small (1.1 inch fully grown) that a juvenile can fit on the end of a match stick. Shock value versus originality. What other animals were harmed in the filming of this reality show? In this case, what wins?

40 Percent Of Madagascar Reptiles Listed As Threatened By IUCN