The Plight Of The Mountain Chicken Frog

Once the national dish of Dominica, the mountain chicken frog is critically endangered.

On two small islands in the Caribbean are the last remaining mountain chicken frogs (Leptodactylus fallax). They used to be widely distributed across eight windward and leeward islands. Famous for a melodious “whoop-whoop” song and plump physique, this frog used to be a reliable food source for local people, but now it is critically endangered. How did the species get to this point? Its recent past and its prospects for the future can be largely explained by biogeography, an unusual life history and its many threats in the wild.

In the past, the mountain chicken frog was found on the Lesser Antilles islands of Antigua, Guadeloupe, Martinique, St. Lucia, St. Kitts, Nevis, Dominica and Montserrat. All of the Lesser Antilles are volcanic in origin, so land bridges connecting the islands to North, South or Central America never existed. With no way for the frogs to migrate naturally, how did they settle on so many islands? 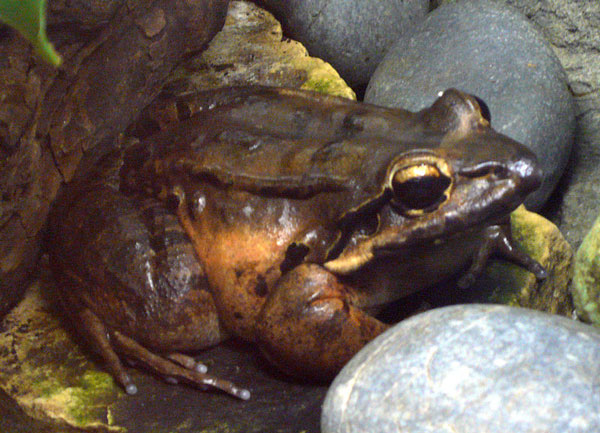 At one time, the plump mountain chicken frog was a food source in the Caribbean.

As early as 2000 B.C., the Amerindian tribes from the Orinoco River Valley, what is now Venezuela, began colonizing the Caribbean. As they spread their culture, they also brought with them their favorite foods. Just as European sailors brought goats and rabbits to the lands they colonized around the world, the Amerindians traveled with their food-source animals. These early tribes introduced agouti, feral pigs and tortoises — all staples in their diet — to the Caribbean.

So, why not frogs? Frogs have always played a major role in Amerindian culture and religion, and they provide a ready source of protein. The historical distribution of mountain chicken frogs correlates perfectly with indigenous people’s exploration and colonization of the Caribbean.

Humans introduced Leptodactylus fallax to many habitats and encouraged their proliferation, but sadly humans are also responsible for the species’ precipitous decline. The only islands that the frogs still call home are the wildest and most natural. Dominica is known as the “Nature Island of the Caribbean,” and Montserrat is by far the most volcanically active island in the region.

Mountain chicken frogs can weigh up to 3 pounds. The species prefers to live near clearings, just inside the edges of forests and plantations. At night males move into the open and sit on logs or rocks to call for mates.

Almost completely terrestrial, this frog is usually only found in water while cooling or “drinking.” Mountain chickens, like many frogs, do not drink like humans do. They have special tissues on their abdomen near their hind legs called the “wet patch.” They can absorb up to 80 percent of the water they require for hydration through this patch of skin.

These frogs are voracious eaters. Although their primary diet in the wild is crickets, they eat just about anything they can get in their mouth: insects, snails, other frogs, snakes, mice and even bats. Their eating is often so enthusiastic that when they lunge forward to snatch insects they often get mouthfuls of grass in the process.

What makes mountain chickens unique among frogs is their mode of reproduction. Several males call to attract a female. When she appears, the males begin to wrestle. They stand on their hind legs and grapple like sumo wrestlers. Males have spurs protruding from their thumbs, which they use to dig into each other. They also secrete a peptide from their skin called Leptodactylus aggression stimulating peptide, which causes male frogs to become aggressive. The battle continues until one male is pinned. The winner gets the girl.

The pair then enters a burrow, hollow log or some other type of hidden, enclosed area. Once there, the male mounts the female, and she begins to secrete a clear liquid from her cloaca. They both kick with their hind legs, whipping the liquid into a thick, viscous foam. While still grasping each other, the female lays 20 to 50 eggs in the foam, and the male deposits sperm. Fertilization is external. This foam nest is where the tadpoles develop without ever being in water.

Then the male leaves the nest and guards the burrow from the outside while the female guards the brood from within. After 10 days the eggs hatch, and the tadpoles begin to swim in the foam.

This is where the unique part begins. Females stand over the foam nest and lay infertile eggs to feed their waiting tadpoles. If watched closely, tadpoles grab eggs with their mouths as they fall into the foam. The mother frog does this several times per week for the next six to eight weeks. She produces a total of 10,000 to 25,000 eggs. This is, by all measures, extreme maternal care for a frog. Mountain chickens are one of only a few species that do it and the only large, terrestrial frog with this behavior. This type of care is called “obligatory oophagy,” which literally means feeding eggs on demand. After the tadpoles metamorphose in about two months, they leave the nest as miniature versions of their parents.

Froglets require roughly two years to reach reproductive size. During this time they must find sufficient food to survive and grow while avoiding being eaten. Other frogs, snakes, crabs — and especially people — consume mountain chickens.

Leptodactylus fallax has faced many threats since it was first introduced to the Caribbean. As Europeans colonized the New World, they began eating frogs, but unlike the Amerindians, they viewed the frogs as an unlimited resource. Overhunting soon decimated most mountain chicken populations. Habitat destruction came next with the establishment of sugar cane plantations. Some islands were almost completely clear-cut to plant crops.

Then the final assault came in the form of two introduced predators: the mongoose and the cane toad. Black and Norway rats, also introduced by Europeans, were a nuisance in the new island settlements and plantations. There also was the deadly fer-de-lance. Mongooses were brought from India to help control the rat and snake populations, which they did. But they also devoured many local and endemic species, including mountain chicken frogs.

Cane toads (Rhinella [Bufo] marinus), also called marine toads, were brought to the plantations to eat the insects infesting the sugar cane. Like mongooses, cane toads proliferated and ate everything in sight, including frogs. The toads also have a much higher reproductive rate than native frogs. Unlike mountain chickens, which take two years to reach sexual maturity and lay only 20 to 50 eggs, cane toads reach sexual maturity in one year and can lay 7,500 to 20,000 eggs in a single spawning. Cane toads also provide no maternal care, which means their offspring scatter far and wide in search of food, and they quickly overrun all other amphibian species. Hence the toads quickly outcompeted the mountain chickens everywhere they were introduced.

By 1776 the last mountain chicken frog from Martinique was reported. Soon they were only left on Montserrat and Dominica. Although humans continued to consume them, somehow their populations remained stable. But then nature struck — twice.

In July 1995, after 350 years of dormancy, the Soufrire Hills Volcano on Montserrat erupted. Humans were evacuated, and lava destroyed about 10 percent of the frog habitat. Vast areas were covered in ash or acid rain. Mountain chicken frogs did not disappear altogether, but their populations were seriously impacted. Just how this natural disaster will affect their reproduction and tadpole development in the future is not known.

Yet the most devastating affront to this species occurred in 2001 when the chytrid fungus (Batrachochytrium dendrobatidis) arrived on Dominica. First discovered in 1998 in Panama, Australia and Washington, D.C., it soon spread around the world and wiped out entire populations — and species — of frogs. Chytrids have been found in more than 100 amphibian species on five continents.

Once the fungus arrived on Dominica, it spread quickly, killing at least 95 percent of mountain chickens within four years. A few frogs manage to survive on the island today, but this one-time stronghold for the species might soon have only memories of this famous amphibian resident.

In the 1970s, several mountain chicken frogs were taken to the Paris Zoo for research and captive breeding. Similarly, several U.S. zoos imported frogs in the 1980s. However, it wasn’t until 1999 that this species was successfully bred in captivity. No one fully understood the complexity of its reproduction and maternal care until that point. These frogs required specialized nesting boxes, substrate, diet, mineral supplementation, a specific photoperiod, seasonality of humidity and moisture, spatial segregation to stimulate territoriality, acoustic properties of the habitat to facilitate calling and mate choice, and more. Successful breeding only occurred after these needs were met.

Currently, approximately 150 Montserrat mountain chicken frogs are managed in 16 U.S. and European zoos. Only six zoos have bred them. Dominican mountain chickens are managed in two populations; one is in the U.S., and another is in England. So far, only the U.S. group — the Rare Species Conservatory Foundation in collaboration with Dr. Jay King — has successfully reproduced.

Wild populations are constantly being monitored. Looking and listening for frogs, foresters and researchers hike transections. Frogs found are measured and examined for disease. The environment is also monitored. On Dominica, field teams must be vigilant to sterilize clothing and footwear, so they don’t inadvertently spread the fungus during their surveys.

On Montserrat the volcano still occasionally erupts, but mountain chicken frog populations appear to be holding their own. Limited tourism and a low resident-human population have minimized the introduction of fungus and reduced hunting pressures. Before the eruption, it was estimated that at least 50 frogs per day were being eaten. Most importantly, Montserrat is chytrid-free, and keeping it that way will mean the difference between life and death for mountain chicken frogs.

Dominica initiated a frog hunting ban in 2003, but despite people’s best efforts, only a few frogs can be heard calling in the wild today. Recently other species of frogs on the island sharing the same habitats as the mountain chicken frog, notably the piping frogs of the genus Eleutherodactylus, have also been found positive for chytrids.

We at the Rare Species Conservatory Foundation know firsthand how challenging the chytrid crisis can be. Despite following safety protocols at our new frog house in Florida, we recently lost two frogs to chytrids while documenting for the first time that the fungus indeed resides in South Florida. Now we are trying to find the wild culprit carrying the disease. Although the fungus’ spread was prevented in this mountain chicken group and all frogs were successfully treated, this terrifying incident reveals how easily chytrids can enter a facility.

Mountain chicken frogs can easily be wiped out. Any field-recovery effort, especially in Dominica, seems a distant dream at best. For now, outside Montserrat the frog is on indefinite life support in the laboratory and must rely on the assistance of organizations such as the Rare Species Conservatory Foundation, Amphibian Ark (amphibianark.org) and others for conservation efforts. The species depends on us now more than ever.

The main goal for the mountain chicken project is to produce as many frogs as possible and develop a safety net for the species. Theoretically, once a critical, sustainable number is achieved, mountain chickens can be reintroduced to chytrid-free habitats. However, because we still don’t know how chytrids spread between distant locations, frogs everywhere are still in danger.