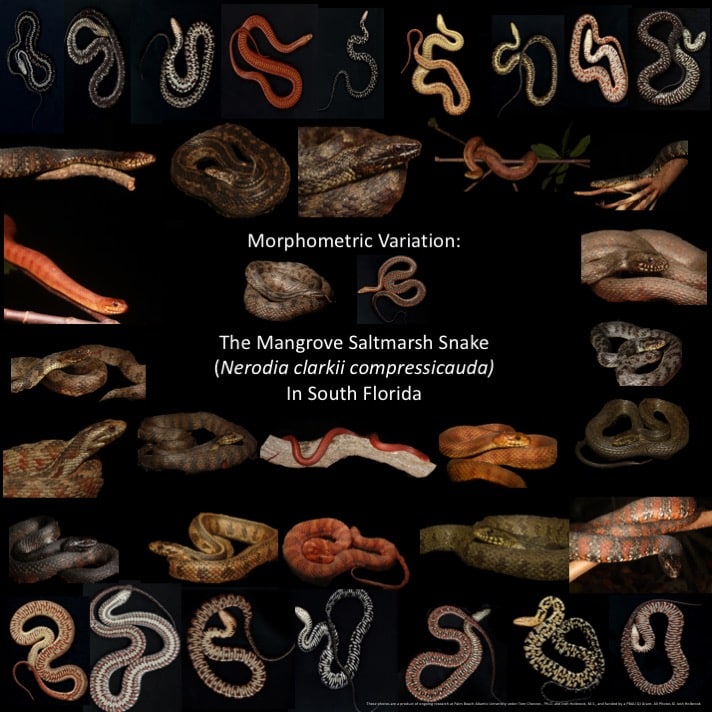 Nerodia clarkii compressicauda, or the mangrove saltmarsh snake, is a semi-arboreal, semi-aquatic snake that is endemic to aquatic habitats in coastal Florida.

Bog Turtle Is Official State Reptile Of New Jersey!
Man Who Smuggled Turtles From Vietnam Sentenced To Three Years Probation
Want To Intern In The Maldives To Help Sea Turtles? Read On!

It was my junior year and first day of a field biology course at Palm Beach Atlantic University when I had the opportunity to participate in a student research program as a field biologist and undergrad student. This study focused on reptile conservation on the native Florida water snake species, the Mangrove Salt Marsh Snake (Nerodia clarkii compressicauda). On the first day, our professor and team leader, Dr. Thomas Chesnes, asked our class why in the world we wanted to be biologists? This field is competitive, underfunded, and at times misrepresented. I think it's important to know what you want to major in before you start college, and from the moment I did I knew I would major in Zoology. As time went by and I started keeping reptiles of my own, I realized that I would love to study these amazing creatures professionally with hopes to pursue a career in reptile conservation. So when my turn came to speak aloud in the class, I said just that! The next time class came around, Dr. Chesnes pulled myself and two other students aside to ask if we’d be part of his ongoing snake conservation research that focused specifically on the Conservation status of the Mangrove Salt Marsh Snake, Nerodia clarkii compressicauda. 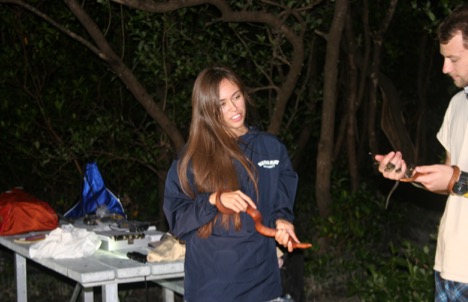 Excited as could be, I eagerly applied to the program to take on this opportunity. Pursuing a career in an underfunded, over-competitive, male-dominated field, it's always important to stand out and follow key opportunities. I knew this was a way to build my resume and pursue my passions for reptiles professionally and be part of direct conservation efforts. I was eager to learn more about this project and be a part of the team, especially as the only girl too! I was also the only student majoring in Zoology, opposed to my copartner students who were both Marine Biology majors. This ongoing research partners with Herpetologist and Professor of Montreat College, Joshua Holbrook, and our “Clarkii Crew” team of five included myself, Dr. Chesnes, and two other biology students, Noah Benedictus and John Foote. By my professor’s suggestion and recommendation, I applied to the summer research program of the university and was accepted in. Before I knew it, the semester was over and I was ready to start the internship as a field biologist for PBA, which started in the Summer. Not only was it something I wanted to do and learn, but it was also a paid gig funded with grants.

Nerodia clarkii compressicauda, or the mangrove salt marsh snake, is a nocturnal and semi-arboreal, semi-aquatic, snake species that is native to coastal aquatic habitats in Southern Florida. There have been individuals documented in Cuba, but research is ongoing and limited. Specifically, as the name suggests, the mangroves are the Mangrove Salt Marsh snake's preferred habitat, and we have spent countless hours and nights surveying their unique ecosystem. These snakes are nocturnal, ambush foragers, which means they wait for their prey to come to them. Although the only documented diet of the salt marsh snake is piscivorous (fish only,) they most likely feed on the diverse brackish habitats opportunistically. This could include invertebrates, small mammals, or birds. So far, nothing but fish has been found in their stomachs though. These snakes also come in a variety of natural colors and patterns like red, green, silver, black, and striped to name a few. They have a unique compressed tail that helps propel them through the water, which is also representative of their scientific name "compressicauda!"

Since not much research has been done on the Mangrove Salt Marsh snake, biologists don't exactly know where their populations are established. This has led to their documented distribution being very patchy, and their conservation status still questionable. Simply put, we don't exactly know where they are all living, or what they're doing. Not knowing where these marsh predators exist, makes it hard to say what their role is in the natural habitats of Florida. This unpublished and ongoing research aims to help bridge those population gaps by doing presence/absence surveys in parks they have never been documented before. This includes Florida counties like Palm beach, Martin, and Broward County. Tedious planning, studying, and acquiring proper permits finally got our team scheduled for May 2017 to June 2018 to survey state parks all over Florida for this elusive snake species. 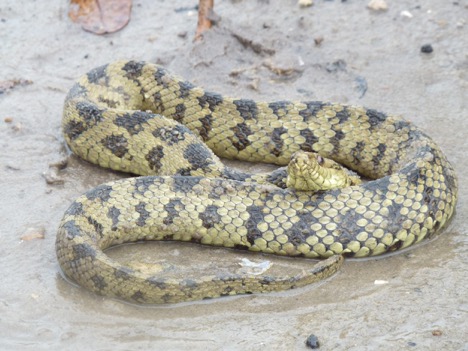 When Summer arrived, we started with numerous trapping methods in hopes of our target species, the Mangrove Salt Marsh snake. These methods included pitfall traps, aquatic traps, dipnet surveys, and road cruising within parks managed by the Environmental Protection Agency. Although none of these methods (besides road cruising) turned up our target species, we found many other herps through these techniques and still contributed to the park’s species lists. These are all great ways to survey for a variety of reptiles and amphibians in Florida's natural systems. In state park areas of this study, these methods were all done legally with permits which is usually always required in these types of studies.

One of my favorite days during this Summer personally, was when we were surveying a park during a summer storm and we came across a breeding group of Southern Spade Foot Toads (Scaphiopus sp.) in a pond apple depression. This "depression" around the pond apple tree is usually just damp mud during the dry (or winter) season in Florida. During the wet season (Summer), the heavy subtropical rains fill up this area to make it a "fishless" pond! This natural phenomena allows amphibian populations to explode. Since there is no fish, they don't eat the tadpoles! Many amphibian species rely on these natural areas of Florida. These toads had never been documented in the specific park we were surveying and they spend the majority of their lives underground. It was very cool to be there for that! 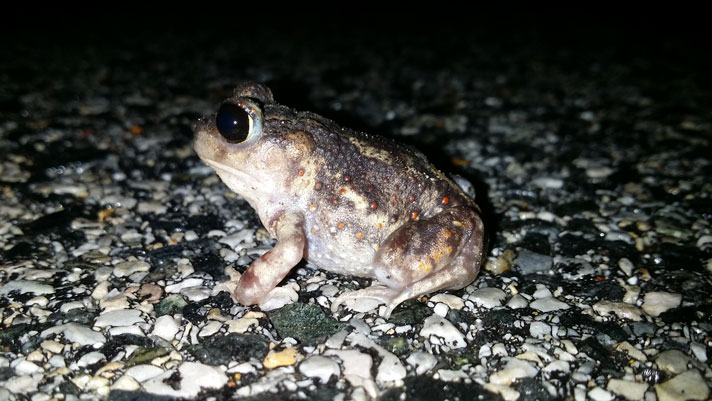 Along with learning varied herpetological sampling methods, we quickly learned that the best method for our particular target species was simple foot hiking. This became the theme over the next year during this program to find the Mangrove Salt Marsh snake. In this study, we hypothesized that if there was habitat, there would be our target species. We start by viewing various state parks through a Google map looking for this ideal habitat. The species seems to prefer shallow estuary, mangrove, and marsh habitats that have an "edge," which are high in vegetation and influenced by the tide. The Mangrove Salt Marsh snake has cryptic camouflage that comes in a variety of colors to blend in perfectly to the foliage of these habitats. Most of the time, this is where we find and capture wild salt marsh snakes hunting in the shallow areas. Small fish get trapped in these parts and make it easy for clarkii to ambush hunt. Once we choose an area of the park to survey, we then hike the habitat in the daylight and come back at night to do the field survey. We start during daylight first so we can know what to expect before nightfall. We then do the actual survey at night since the species is nocturnal and only active during late hours. This means we spent many nights overnight surveying these habitats. While hiking around the edge of these mangroves, marshes, and estuaries, we catch snakes by hand and perform various morphometric data right there in the field. Morphometrics included weight, sex, color, snout to vent length, tail length, palpative induction, and scale counts using tools like scales, calipers, measuring tape, and probes. Palpative induction is a method to physically stimulate a snake's stomach, which gently causes them to regurgitate any undigested meals. Since the species is a documented piscovore, finding anything other than fish would be a huge deal! Again though, nothing has been found in their bellies but fish! During my final year at Palm Beach Atlantic University, we hiked the mangroves, wetlands, and estuaries alongside professors all over Florida, capturing and collecting data on these beautiful, yet poorly researched reptiles. 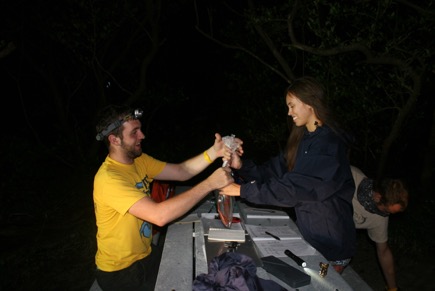 John Foote and I doing morphometrics on a mangrove salt marsh snake.

Due to habitat overlap and patchy distribution, hybridization is a key point in our Conservation research. Hybridization threatens the Mangrove Salt Marsh snakes with two species of freshwater Nerodia fasciata species. Hybridization is a hot topic in conservation because it compromises the genetic purity of a species and their unique genetic variation. Over many generations that are breeding, the pure compressicauda species could eventually be lost to extinction because of the hybrids different DNA. Because of environmental pressures and development, the study hypothesizes that unnatural habitat overlap is causing increased hybridization. This habitat loss can be man made or natural, including commercial development and natural disasters like hurricanes and climate change. To confirm genetic purity, midline scale counts were used to define the pure Mangrove Salt Marsh snake from its hybridized counterparts. With pure compressicauda, 22-23 scales were indicative against the 19-21 hybrids. Although there have been exceptions to this old school rule, aside from genetic testing (which we did not do), so far this is an efficient way to determine the data of this study. 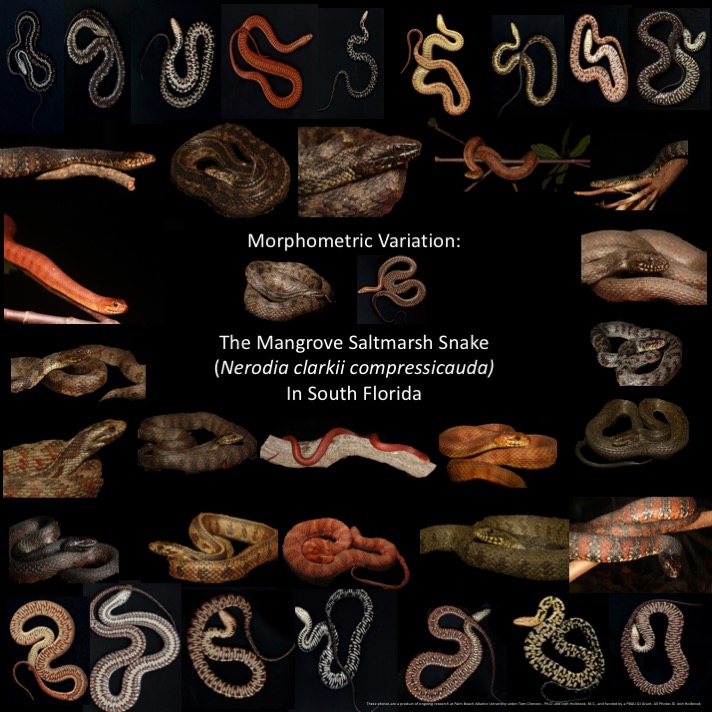 We have documented hundreds of clarkii all over the state, varying in color patterns and dispositions with many of the most foul-tempered individuals ended up being hybrids. We hypothesized that if there was habitat, there was clarkii, and this was the determining factor in our survey choices for the year. Hiking through mangrove swamps over many nights gave us hundreds of samples and the team documented the first known specimens in Broward and Martin county. Our findings got published in the newspaper which was awesome to help introduce these elusive snakes to the public! You can read about our Broward county findings here! 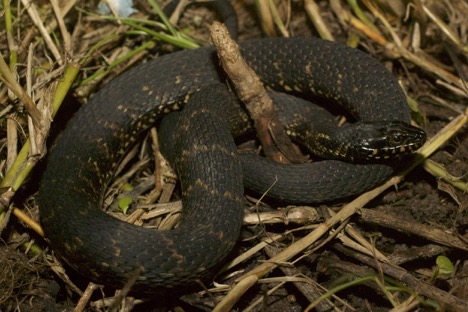 This ongoing scientific research in the works by Chesnes and Holbrook was a privilege for me to be part of in my last year of undergrad studies as a zoology student. It gave me opportunity for my career, experience being apart of a scientific team, and a greater appreciation for my own backyard in Florida. By communicating the conservation status of the Mangrove Salt Marsh snake, development and conservation efforts can be properly distributed and planned for when the distribution of a species’ population is understood. Without knowing established numbers, understanding the impact of their loss on a threatened ecosystem (like the mangroves) is almost impossible! 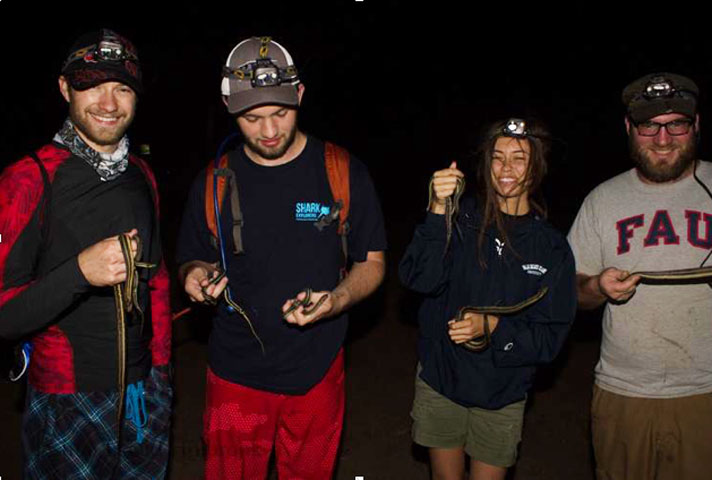 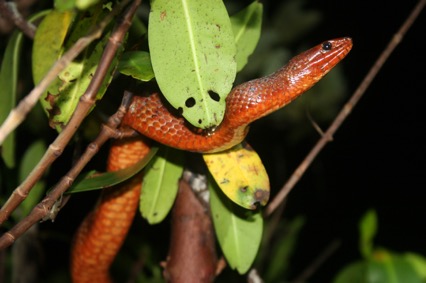 Upon graduating with my zoology degree, my team and I have done multiple presentations at university conferences and I have also been able to personally speak on behalf of the species at some state parks and hobbyist groups. This has helped spread awareness for a worthy Floridian native, which ultimately leads to legal protection. So many reptiles are declining in their historical ranges, and with the mangrove salt marsh snakes we are working to know where they are established to begin with. Knowing the population patterns helps to protect the habitat and species overall. This research showcases a beautiful snake while emphasizing the importance of field work and herpetological research as a student and biologist. This project has also helped spread awareness for Reptile Conservation and the important need for funded biological research.The wild variation of color the Mangrove Salt Marsh snake comes in naturally is just another indication there is still much to be known about one of the mangrove’s most elusive predators.