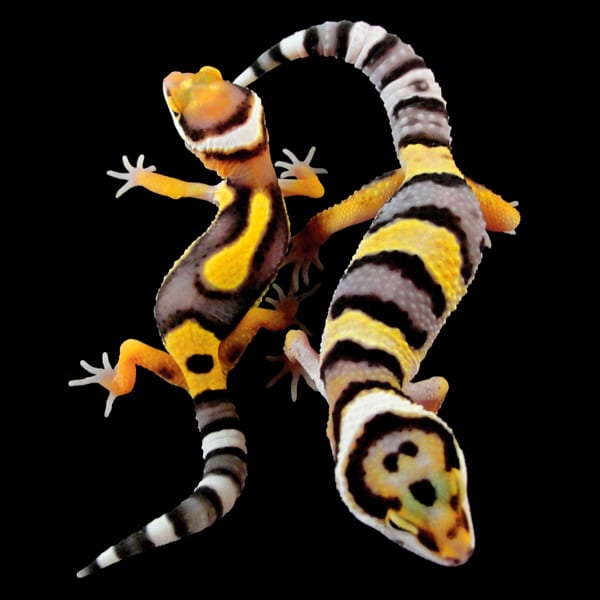 A primer on leopard gecko morphs and genetics

Leopard geckos (Eublepharis macularius) are the fastest-growing pet in popularity in the world today. There are many attributes of this animal that have driven the hobby to new heights, such as ease of care, docility, beauty, cost and cleanliness. Perhaps one of the most intriguing aspects of this wonderful little creature has been the worldwide interest in new morphs and crosses due to the fascinating genetic possibilities. Hundreds of morphs and crosses have been created by breeders, collectors and budding, well-informed hobbyists keen on developing the latest hot morph or cross.

In recent years, the Internet, reference books, forums, expos and journals, such as REPTILES and Reptiles USA, have provided a wealth of information on the care, breeding and genetics. That infusion of knowledge has created a community of experts, who strive to augment the leopard gecko hobby through their hard work and diligence.

The sky is the limit when it comes to producing the various crosses being created around the world today. Many breeders have their own morph lines, each with its own characteristics, colors, patterns and sizes. True new morphs are more difficult to come by, with many so-called “new” morphs often times being variants or crosses of other existing morphs.

When selecting geckos for a breeding project, the breeder must have a solid plan in place to achieve the desired result, with thorough knowledge of the genetics involved. It is imperative that the geckos acquired are from a known genetic background. This can be a challenge. Due to the massive increase in breeding of leopard geckos worldwide, the gene pool has gotten somewhat questionable in recent years. Finding pure genetic animals has become more difficult. Many so-called pure genetic animals may, in reality, have various heterozygous backgrounds, often unbeknownst to the breeder until they start to produce animals and find odd results popping out of the eggs! Acquisitions must be done with this in mind, so new breeding projects can be established on a solid genetic footing. Obtaining breeding-project geckos from reliable sources, who can assure genetic integrity of the animals, is imperative. 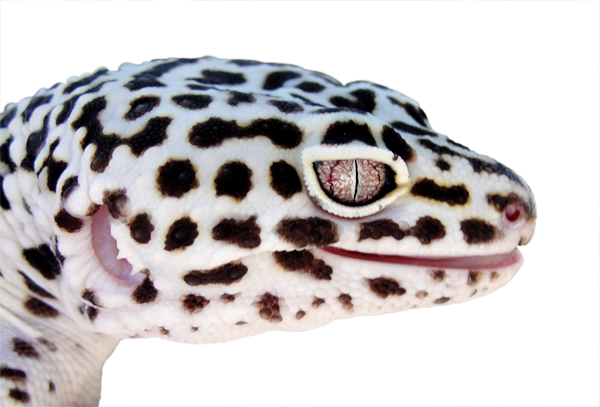 There is a lot to know about breeding leopard geckos when you take into account heterozygous, homozygous, dominant and recessive genes, etc., and anyone considering breeding projects should do their homework before embarking on a project. There are excellent genetic resources on the market, as well as websites, forums and social media venues. There are also online genetic calculators to utilize, which will give a fairly accurate prediction of breeding outcomes based on the genetics you plug into them. (These seem to change on a regular basis, so do a Google search, and you are bound to find one.) It is also a good idea to find breeders who have worked with similar projects to get their input. Most reptile breeders are very altruistic and willing to share their knowledge. Networking with others in the hobby can provide a wealth of knowledge, and the importance of this cannot be understated. I have learned a great deal through the years from other gecko experts, such as Ron Tremper, Steve Sykes, Garrick DeMeyer and many others, who are most kind in imparting their knowledge to others to further the hobby.

Leopard gecko genetics are very fascinating in many ways, and I have found that not only are the genetic outcomes quite predictable, but that other traits aside from phenotype are also transmitted down to the offspring. In my newly released book, The Leopard Gecko Advisor, I get into a great deal of depth on the intelligence, socialization and enrichment of leopard geckos, as well as cutting-edge care and husbandry aspects. Some geckos are more intelligent and social than others, some are better eaters than others, and various other traits, like personality, are very often genetically determined. 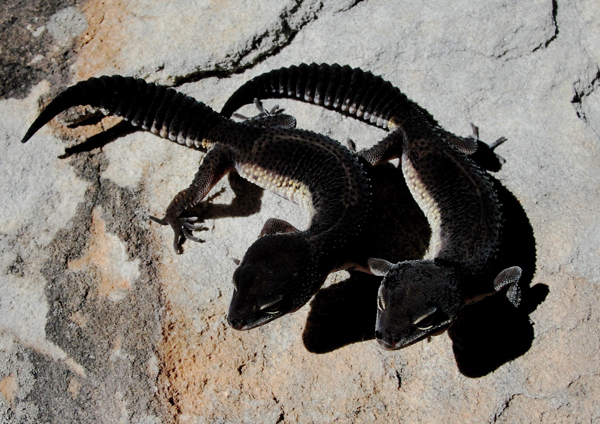 Designer Geckos has recently acquired these Black Nights and has entered into a partnership arrangement with breeders Ferry Zuurmond and Roy Sluiter of the Netherlands to develop this beautiful new black gecko, which is the result of a 15-year breeding project.

Genetics also play a role in the handling aspects of the various morphs. Certain gecko morphs are very mellow, while others are more lively and better suited for advanced hobbyists. I normally recommend the more docile morphs for children and beginners. Some of the designer morphs, such as Bandits and Mack Snows, are quite docile, as are the Giants, which are genetically a very calm gecko. Giants are some of my favorite geckos for this reason. Super Giants can achieve sizes up to 12 inches in length, and though a larger gecko than your regular leopard gecko, they are easy to keep and make wonderful pets.

Line breeding (breeding morphs with similar traits to each other) is common in reptile breeding projects, and astute breeders select the best offspring examples for subsequent breedings so that each generation continues to be refined to produce higher-level animals. For instance, in the leopard gecko community, there are many different lines of Tangerine leopard geckos, each having a slightly different appearance, structure or coloration. Many breeders select the best Tangerines from various lines and combine them to refine and produce their own new lines. The Designer Geckos line, called Mandarin Tangerines, is a refined line that combined the best examples of many different lines until we came up with the attributes we were looking for, such as a robust body structure, conformation and specific coloration. Mandarins are known to have unique coloration and are a large, robust gecko. Many breeders are continuing to refine various Tangerine lines to produce their own look. 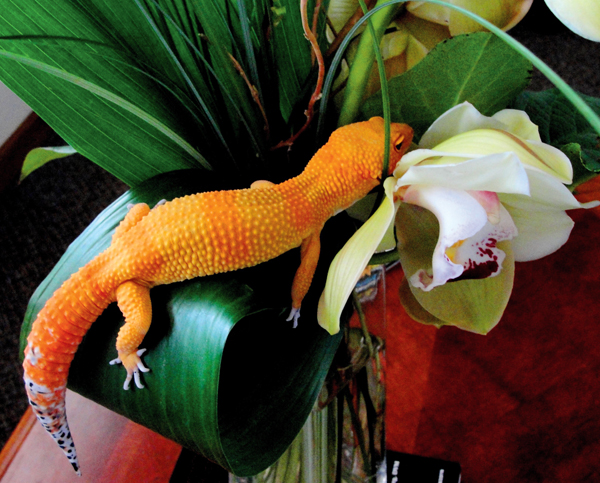 This line of Tangerine leopard geckos, called the Mandarin Tangerine, is the result of line breeding and is the combination of the some of the best examples of many different Tangerine lines.

We all remember the Punnett squares from biology class, a simple chart method to determine breeding outcomes of known genetic backgrounds (genotype). The phenotype refers to the physical appearance (color, size, pattern, etc.) of the gecko. A homozygous gecko has a genetic background of two of the same gene alleles, and if the alleles are different (one dominant, one recessive), the gecko is considered heterozygous, carrying the recessive gene. When breeding geckos that are heterozygous, both parents would need to be heterozygous for the same recessive allele for that particular trait to be expressed in the offspring. 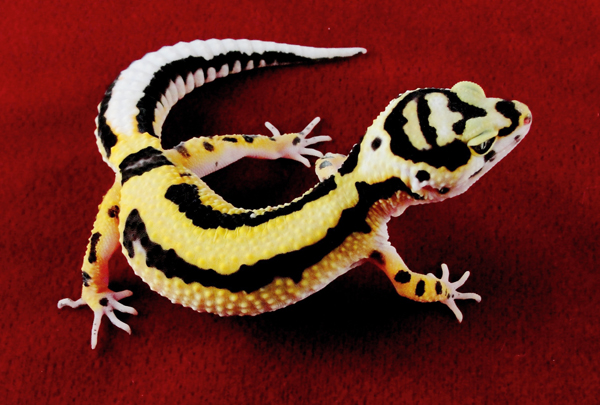 Some traits are due to one gene that has been changed (single gene traits), while some are polygenic (influenced by multiple genes). Some of the more popular leopard gecko polygenic traits are Jungles, Stripes, Tangerines and Bandits. Some dominant trait examples are White and Yellows, and Enigmas. Co-dominant examples (where both alleles are expressed) are Mack Snows and Giants. Recessive traits include the various Albinos, Blizzard, Patternless and Eclipse. The combinations and possibilities are endless!

Leopard gecko genetics are complex and can take up a book full of information. Topics like test breeding, trait proving, mutations and gene linkage are subjects for advanced genetics, and I encourage any serious hobbyist to do their due diligence if they endeavor to perform high-quality breeding projects.

The genetic and breeding complexities are astounding, and since the reptile hobby has become so mainstream, my hope is that reptile genetics experts will consider offering classes and tutorials to assist hobbyists and further the growth of the reptile field and hobby.

Other aspects of breeding projects also need to be considered as high priorities, particularly proper care and husbandry, appropriate temperatures of enclosures and incubators, and scrupulous tracking of the eggs of every project. While colony breeding is often the norm among the larger gecko breeders, the downside is that it can be challenging to determine the exact lineage and genetics of the offspring. Single breedings are the most reliable breeding practice, and while not as productive in numbers as colony breeding, it allows the breeder to know the exact parentage of each egg. Each egg can then be carefully charted out so that when the babies hatch, the breeder knows the exact genetics of each offspring. This eliminates the guesswork, and allows the breeder to know all the genetic aspects of each baby, which is a major plus for customers looking for exact genetic backgrounds for their own breeding projects. The other plus of single breeding and careful egg tracking, is that if something spectacular or unique is produced, the breeder knows the exact parentage of those offspring and can do further breedings to try to duplicate those results. Incubation temperatures must always be closely regulated and monitored to avoid temperature spikes and fluctuations that can cause birth defects, such as kinked tails and other body malformations.

To summarize, I encourage leopard gecko enthusiasts to perhaps someday embark on their own breeding projects, even if on a small scale or just one project. The knowledge you will gain from the endeavor will make your gecko journey all the more exciting. Studying the genetics and amazing breeding potential of these wonderful animals will enrich you, and others that you, in turn, will impart knowledge to. Witnessing the miracle of life when eggs hatch, and knowing you had a big part in that process, will always be a source of great personal satisfaction.

Ray Roehner has been a reptile enthusiast since the age of five, and has maintained and studied many reptile and amphibian species. His career in pharmaceutical research management gave him the technical background in animal care and husbandry, which developed into his passion for keeping and breeding leopard geckos. This evolved into the first commercial storefront in Colorado, Designer Geckos, specializing in leopard geckos. Since then the store has relocated to Sedona, Ariz., while the online business continued to operate to provide geckos worldwide to customers interested in their morphs. Ray’s latest book, The Leopard Gecko Advisor, is the culmination of many years of animal research and provides readers with his cutting-edge knowledge in the proper care and husbandry of leopard geckos. Visit his website at designergeckos.com or check out their new location in Sedona, Ariz.