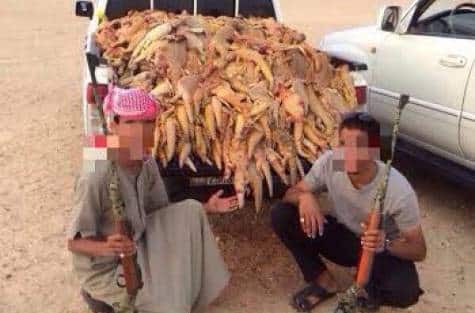 The Uromastyx is a popular food item in Saudi Arabia.

An image circulating around the Internet showing two men holding rifles with a truckbed full of dead Uromastyx lizards in Saudi Arabia has been called an environmental disaster and citizens of the kingdom have called for strict penalties against anyone who hunts excessive quantities of the lizard, known locally as dhabi.

“The Saudi Wildlife Commission should endeavor to identify the two young men and press for action against them for their heinous act,” one activist said, quoted by local news site Sabq. “If no action is taken, then we may lose the dhabi forever since it will be extinct,” he said.

According to the report, the uromastyx has been hunted nearly to extinction often in quantities seen in the picture, resulting in drastic drops in their numbers. They were previously seen in larger quantities but are now scarce. 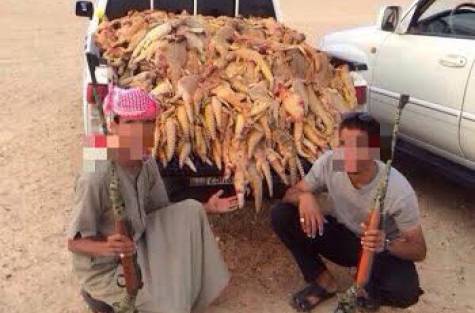 Two men pose with a truckbed of dead Uromastyx lizards.

“What the two men did was an environmental disaster and it should be addressed without any room for leniency or complacency,” said Abdullah Al Qhidani, who has monitored the populations of dhabi in Saudi Arabia for several years. “They have been victims of wild hunting in the last few years, often in large quantities, and there are today regions where they can no longer be seen,” he said.

The uromastyx lizard, of which there are 18 species, can be found in most of North Africa, the Middle East, and south central Asia to the Indian sub-continent. The trade of this lizard is regulated by CITES but not prohibited. They grow between 10 to 18 inches in length and can live more than 15 years.

Want to Learn More About the Uromastyx?