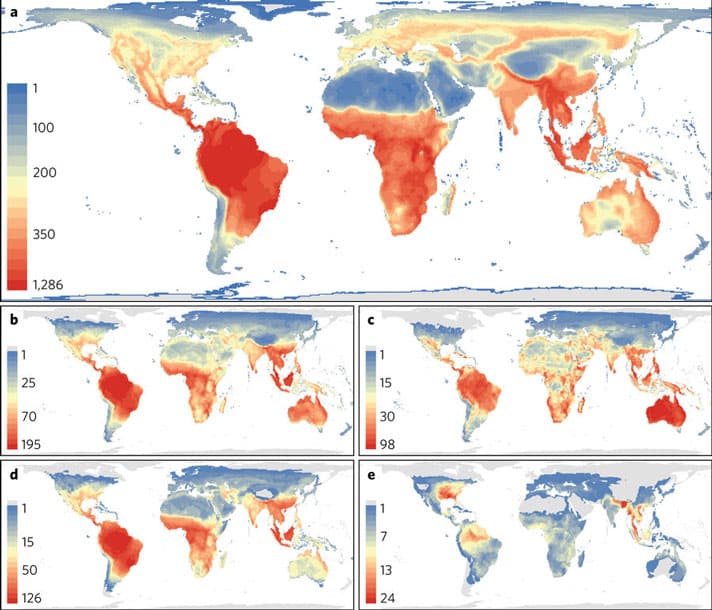 The first definitive map that details the distribution and density of all described reptile species in the world.

A team of 39 scientists led by Uri Roll of Ben Gurion University of the Negev, in Israel have completed what they say is the first definitive map that details the distribution and density of all described reptile species in the world. 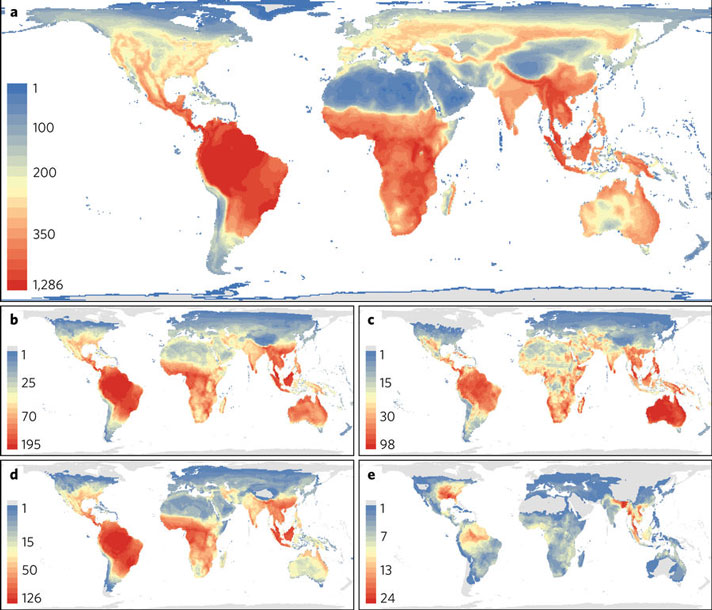 Ben Gurion University of the Negev

Caption: a, Richness of all tetrapods (reptiles, amphibians, birds and mammals). b–e, Species richness of reptile groups: all reptiles (b), lizards (c), snakes (d) and turtles (e). Grey areas denote terrestrial regions devoid of species in a particular group. Blue colours denote regions with few species and red ones denote regions with many species (note that the scale differs between panels). All maps in an equal area, Behrmann projection at a 48.25 × 48.25 km grid-cell resolution), scale bar values represent species richness.

The “atlas of life” is a geographic model of the earth’s vertebrate species and the map enables researchers to identify the world’s conservation hotspots. The reptile map adds to the data of more than 5,000 mammals, 10,000 bird species, and 600 amphibian species.

The reptile map and research paper, just published in Nature Ecology & Evolution, comes more than 10 years after the completion of the maps on mammals, birds and amphibians. The scientists say that the data at the time was too scarce to interpret objectively.

“Lizards especially tend to have weird distributions and often like hot and dry places, so many of the newly identified conservation priority areas are in drylands and deserts,” Roll told Cosmos Magazine.

“These don't tend to be priorities for birds or mammals, so we couldn't have guessed them in advance.”

The map and data will enable scientists to identify areas of reptile diversity and will also help to determine what areas of the world are threatened. So far they have identified the Arabian peninsula, inland southern Africa, central Australia, and the steppes of Asia as areas of concern, based on the data gleaned from the map.

“On the one hand, finding vital areas in arid regions is a good thing because the land is fairly cheap,” co-author Richard Greyner from Oxford University told Cosmos Magazine.

“But deserts and drylands are also home to lots of other modern activities, such as major irrigation projects, huge new solar power developments, and sometimes widespread land degradation, war and conflict. This makes them very challenging environment for conservationists to work.”

The data is already being analyzed by the International Union for the Conservation of Nature, and its scientists are classifying each species based on rarity and vulnerability.

The paper, “The global distribution of tetrapods reveals a need for targeted reptile conservation,” can be freely accessed on Nature.com.