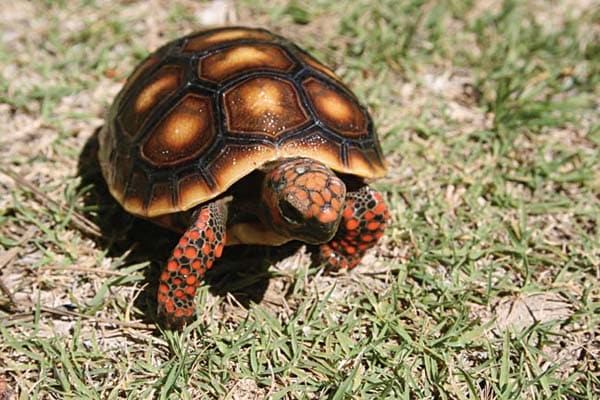 Keeping And Caring For Red- and Yellow- Footed Tortoises

Your guide to keeping this interesting South American tortoise.

Carpet Python In Seattle Missing Its Owner
One Direction Turns Itself Into The Frog Band Pond Direction
Florida Woman Rescues Injured Turtle On Road, Which Promptly Lays Eggs In Her Car 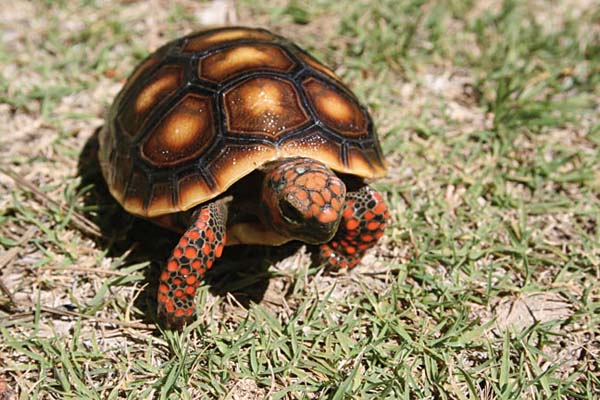 Like most tortoise species, red-and-yellow footed tortoises thrive when kept outside. This tortoise is a red-footed tortoise (Chelonoidis [Geochelone] carbonaria). 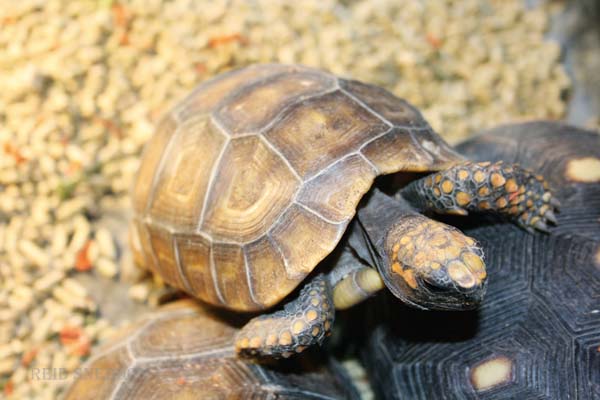 Yellow-footed tortoises (Chelonoidis [Geochelone] denticulata), such as this one, have longer prefrontal scales than red-foots.

The easiest method of telling red-foots and yellow-foots apart is the differences in the head scalation. Yellow-foots have longer scales on the top of their head near the nose. They’re called prefrontal scales. The species also has a fragmented frontal scale, which resides in front of the prefrontal scales. Red-foots have shortened prefrontals and a visible frontal scale. Besides this difference, female red-foots are more elongated, and older male red-foots tend to have an hourglass shape. Adult male and female yellow-foots tend to be rounder and somewhat flatter in overall shape. Males of both species can be distinguished from females by the concave plastron and longer tail.

Most tortoise species seem to thrive better when kept outside in areas with similar climates to their natural range. Red-foots and yellow-foots are no exception. Because both species do not hibernate in nature, they do very well in the warm, humid states of the southern and southeastern United States. This is not to say they won’t thrive in other cooler, dry areas of the U.S., but some adjustment is necessary, such as misting systems and supplemental heat. Keep adults outside at least during the warmer months in large pens that provide each tortoise with a minimum of 9 square feet of space. For example, a group of five animals should have a pen measuring a total of 45 square feet. Plant it heavily to provide cover and additional humidity. 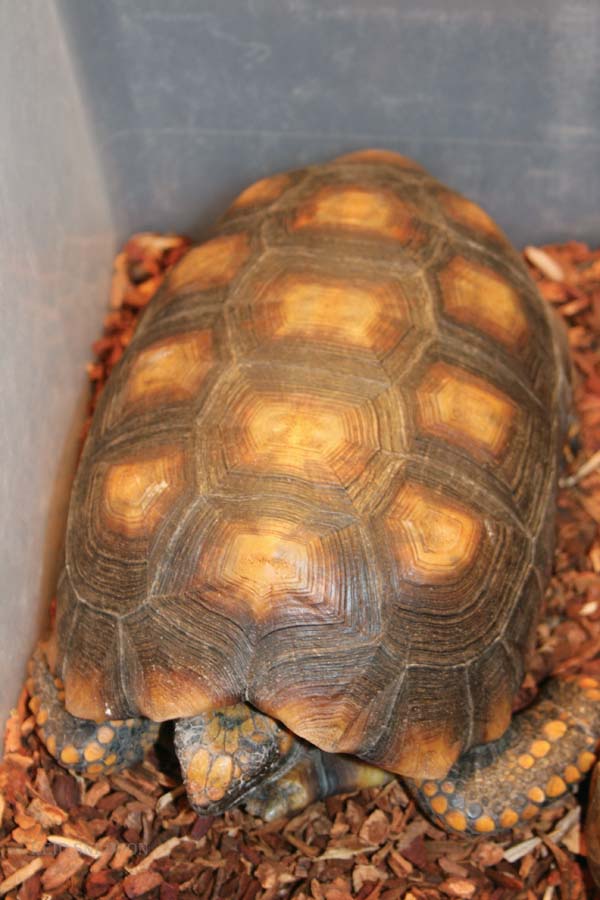 In colder climates, tortoises should be taken inside for the winter. Provide UV lighting and a heat bulb.

An insulated shelter, such as a doghouse outfitted with a ceramic heat emitter connected to a thermostat, can provide shelter for cooler nights. The shelter temperature should be above 60 degrees Fahrenheit. Use a substrate of cypress mulch or sphagnum moss in the shelter, and occasionally mist it to keep up the humidity.

Adults should also be provided with a large, shallow water bowl for drinking and soaking. If there is just one animal, it should be big enough for the tortoise to fit. For larger groups it should fit two or three tortoises at a time. A water level no higher than the gular, a section of the plastron under the chin, is ideal. Anything deeper could drown a tortoise. Mud wallows are also enjoyed.

Both inside and outside enclosures should be at least 3 inches taller than the tortoises are long. For example, a 12-inch-long tortoise needs walls at least 15 inches high to prevent escapes. If a vertically standing tortoise can get its legs over the top, the wall probably isn’t tall enough.

Most hobbyists keep hatchlings indoors. Accommodations can include small cement-mixing trays or plastic storage boxes for enclosures. Prone to dehydration, hatchlings need a humidity around 70 to 80 percent. Only moist sphagnum moss should be used as a substrate until they are at least 6 months old. When hatchlings get older, some peat moss, topsoil and play sand can be mixed in. An appropriate mix is 70 percent peat moss, 15 percent topsoil and 15 percent sand. Keep the temperature under the heat lamp around 90 degrees Fahrenheit.

Position bulbs providing heat and UVA at the basking end of the habitat, and the hotspot temperature should be in the low 90s. A fluorescent UVB-producing bulb is suspended over as much of the habitat as possible. Another option is to use mercury vapor bulbs, which produce heat, UVA and UVB. However, be careful of the temperatures when using these bulbs. Always follow the manufacturer’s guidelines for lamp placement and distances.

Suspending heat and UV bulbs over the container provides the lighting necessary for vitamin D3 synthesis, which promotes tortoise growth and health. Without UVA and UVB exposure the tortoise’s shell will grow uneven and deformed, giving it a pyramid look.

Keep the cooler end of the enclosure in the mid to upper 70s. Night temps can drop to 70 degrees. If temps get lower than this, you can use a small heat mat on a thermostat. Position it under one-third of the container at the basking end. This allows tortoises to choose a comfortable temperature.

Provide a small, shallow water bowl no deeper than the bottom of the tortoises’ shells, so the hatchlings drink often. Also soak your hatchlings every one to two days in shallow, warm water for approximately 10 to 15 minutes to ensure adequate hydration.

Red-footed and yellow-footed tortoises are primarily herbivorous. They graze on a wide variety of grasses, fruits, flowers and small plants. In the wild both species have been reported to consume small amounts of animal material, such as carrion.

Hatchlings are fed greens daily, and I sprinkle a calcium supplement over each serving. If tortoises are kept indoors, you should use a calcium formula containing vitamin D3. If they’re kept outdoors, use a calcium supplement without vitamin D3. Both hatchling and adult tortoises seem to enjoy having cuttlebone available, which they gnaw for additional calcium or to keep their beaks trimmed. A high-quality, herbivorous-reptile vitamin powder should also be sprinkled over the food two to three times per week for growing tortoises.

Also offer a small amount of animal protein to red-foots and yellow-foots. Every three weeks feed adults protein, such as low-fat dog food, thawed mice, monkey biscuits or a commercial tortoise diet. Opinions vary on how often to feed hatchlings protein, but mine typically get it as often as the adults. They seem to enjoy Phoenix Worms, butter worms and the Mazuri Tortoise Diet. Feeding animal protein too often can lead to pyramiding.

In closing, red-foots and yellow-foots are beautiful and interesting South American tortoises to keep and breed. Collection for the pet trade, overhunting and habitat loss threaten wild populations of both species, but many tortoisekeepers have established viable captive-breeding groups. This can help to reduce the exportation of wild tortoises, which will in turn help to keep wild populations of these amazing tortoises alive and well.

REID SNEDDON is a member of the California Turtle and Tortoise Club and the Turtle Survival Alliance. A private breeder of various tortoise species and other reptiles for almost a decade, he also performs reptile presentations. Visit his website at socalreptiles.com.