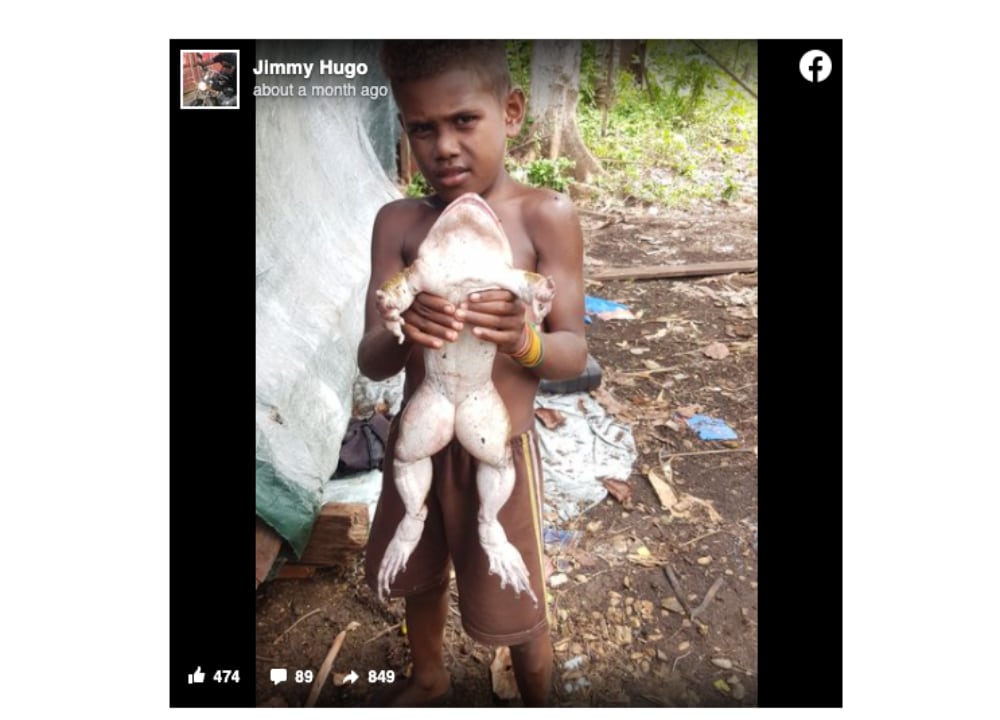 If you haven’t seen a Solomon Islands giant webbed frog (Cornufer guppyi), you have got to see this beast of a frog. In April, pig hunters in the Solo

If you haven’t seen a Solomon Islands giant webbed frog (Cornufer guppyi), you have got to see this beast of a frog. In April, pig hunters in the Solomon Islands captured what has to be one of the largest frog species, the Shortland Island webbed frog. The frog, of the family  Ceratobatrachidae is massive, nearly 10 inches snout-to-vent length and weighing 2.2 lbs (1 kg).

Jimmy Hugo, operations manager at a timber mill where the hunters work, posted a photo of the frog onto his social media account and was surprised how many people took interest in the massive amphibian, which the locals call bush chicken, because of its supposed taste.

“At first, I thought only a few people would see it and then suddenly I saw lots and lots of people commenting, surprised, and they were thinking this frog is from PNG [Papua New Guinea],” he told the the Australia Broadcasting Company. “I was very surprised to see how people reacted to the picture.”

Jodi Rowley, curator of amphibian and reptile conservation biology at the Australian Museum and a discoverer of several frog species, told Australian geographic she hasn’t seen the species so big.

“I’ve never seen one that big. It’s quite uncommon for them to get to that size so this one must have been quite old.”

“I’ve taken a picture of one of those frogs [which had a] snout-vent length of about 30cm – the length of your ruler,” Pikach said. “That frog had a ground grub in its mouth. It was busy eating and couldn’t jump so I went and patted it like a little puppy dog. It was huge.”

Pikach says the species is getting more rare because of habitat destruction and degradation.

“These frogs are an excellent indicator of water quality. As more streams get polluted as a result of anthropogenic impacts mainly caused by logging throughout their range, they are becoming rare.

“I noticed that they don’t occur where they once did in lowland streams. And interviews with locals showed that frog populations have drastically plummeted due to stream disturbances. This highlights the urgency of greater habitat protection,” Pikach said.

The Shortland Island webbed frog or giant webbed frog is listed as a species of least concern. It has a rounded snout with a round tympanum and fully webbed toes. It has very long legs and makes have external vocal sacs. It lives in rainforest streams and small rivers at elevations of up to 700 meters (2,300 feet).