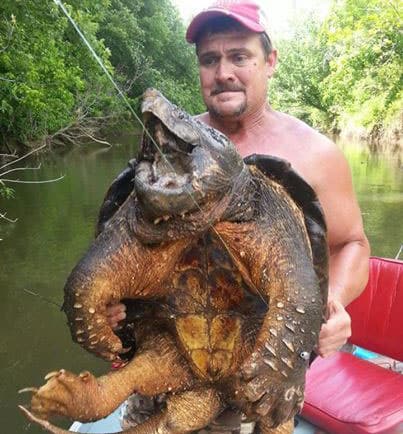 The alligator snapping turtle was estimated to weigh about 100 pounds.

Two anglers were fishing for catfish in Oklahoma when angler Dave Harrell of Edmond, OK hooked into what would be the largest alligator snapping turtle (Macrochelys temminckii) he and his fishing buddy Audey Clark had ever seen. Harrell and Clark were fishing in a boat in Mill Creek when the estimated 100 pound chelonian struck his bait. Clark wrestled the turtle into the boat while Harrell snapped a photo of the catch and then released it back into the water.

Alligator snapping turtles are the largest freshwater turtles based on weight. They are native to the southeastern United States, living in bodies of water that offer ample prey items, such as fish and dead fish, snakes, crayfish, aquatic plants and other turtles. They are considered endangered in Kentucky, Indiana, Illinois, and Missouri where they are protected by state law. In Oklahoma, the alligator snapping turtle is considered a species of special concern due largely to its low reproductive rate. They are protected year round and trapping, possession, or killing of them is prohibited.

The Difference Between the Common and Alligator Snapping Turtle