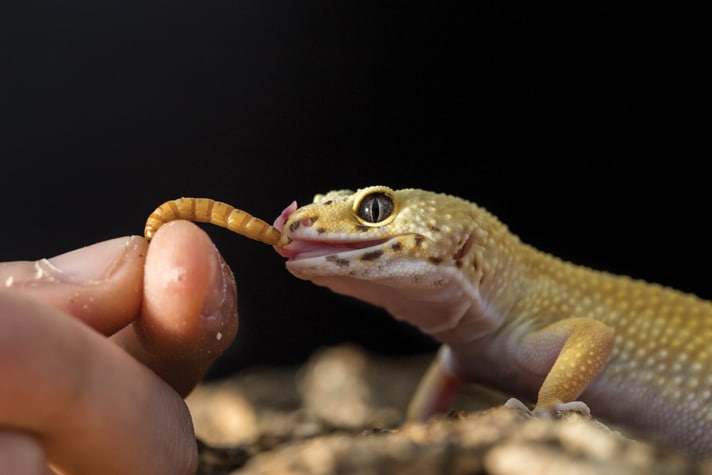 How To Raise Your Own Mealworms

The humble mealworm has long been a favorite dietary staple of pet reptiles and amphibians.

Mealworms are well known in the reptile-keeping world for being a convenient feeder insect to offer pet lizards, and though it’s very convenient to purchase mealworms at local pet stores or order them online, some reptile keepers, especially breeders who maintain many animals, like to try raising their own. This article will outline the basics of raising mealworms yourself, including how to load them with nutritional value, keep their environment clean, and breed your mealworms fast enough to keep up with the demand of your herps. 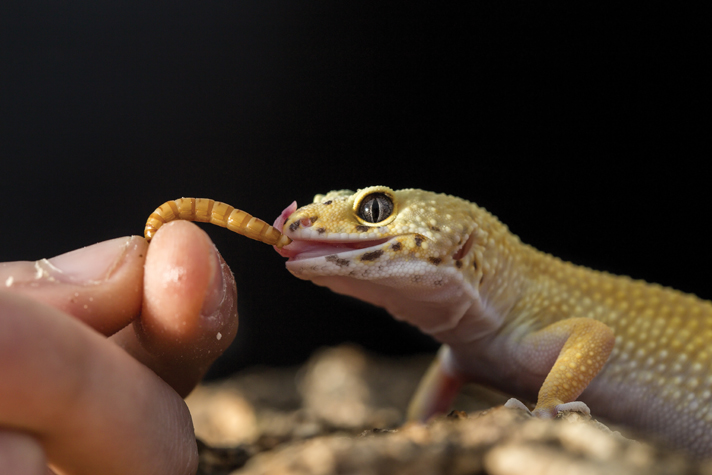 The humble mealworm has long been a favorite dietary staple of pet reptiles and amphibians.

While mealworms don’t necessarily require an intensely monitored enclosure the way some animals do, they do have basic requirements that need to be met.

A large colony can be set up in a plastic tub with smooth sides to prevent escapees, such as the common 66-quart plastic storage bins made by Sterilite that are widely available. Place a 4-inch layer of bran, wheat flour and/or cornmeal into the bottom of the container to serve as both bedding and a food source, but not the sole food source. Feed them nutritious vegetables as well.  I recommend a Zilla screen top to allow good ventilation within the habitat, rather than using the plastic lid that comes with some containers. Otherwise, it can become too warm and promote growth of mold and bacteria. Mealworms thrive at around 75 degrees Fahrenheit, an ideal temperature for breeding, laying eggs and living through their entire life cycle. An incandescent lamp or heat emitter like the Zilla Day Blue Light Incandescent Reptile Bulb and Zilla Reptile Fixture can be placed on top of the screen top to maintain this temperature if needed. Much higher temps can be detrimental to the worms’ health. You can measure these with the Zilla Terrarium Heat & Habitat Controller and Reptile thermometers.

Mealworms tend to breed faster with higher humidity, and while the humidity in most people’s homes is fine, in drier climates, adding a glass of water tall enough to keep the worms from climbing up into it can help raise the humidity in their enclosure. Don’t use a shallow water dish because worms that enter the water will most likely drown. The humidity can be measured with reptile hygrometers. 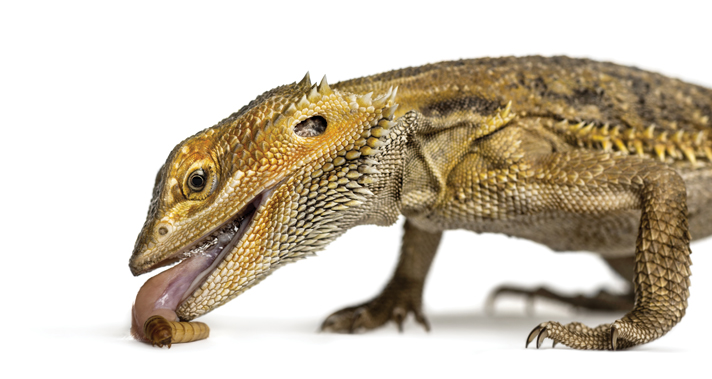 Bearded dragons are among the many pet lizard species that will eagerly snap up mealworms.

I recommend purchasing large, common mealworms (Tenebrio molitor) as starter stock for a new colony, as they will turn into beetles faster than smaller worms. Mealworms are the offspring of the darkling beetle, and once they mature into beetles they are ready to breed almost immediately. A female darkling beetle will usually lay around 500 eggs that will generally take four to 19 days to hatch. Eggs are visible, and some beetles may eat them; therefore, some people remove the beetles from the breeding container once eggs are laid to ensure they hatch into mealworms.

Avoid using worms marketed as “giant mealworms”; these have been treated with a growth hormone that prevents them from turning into beetles and will thwart your efforts to start a colony. I also don’t recommend trying to raise your own superworms (Zoophobas). While superworms are a great reptile food, they are more difficult to breed than T. molitor.

It’s best to buy in bulk when purchasing mealworms for your colony. Not only do you need a significant amount to start a healthy, sustainable breeding colony—I recommend 2,500 at the very least to start off—but mealworms are often less expensive when bought in larger amounts.

It’s important to keep the mealworm colony container relatively clean. Regularly check for dead worms (they usually become a darker brown when they die) and remove them. Dead mealworms are typically ignored when offered to reptiles, so they aren’t usually worth saving, unless you want to use them as organic matter to feed plants.

Mealworm colonies do not typically smell like anything other than their bedding, but if neglected, the dead worm and frass buildup can create a bothersome and persistent odor. Once a month or so, sift out the frass (waste that can be used in gardens) and old bedding, wash and dry the container, add new bedding and replace the insects. If the container is neglected, it can also attract unwanted pests and grow fungus, mold or bacteria.

After hatching from their eggs, mealworms remain in the larval worm stage for approximately 10 weeks in preferred conditions, after which they turn into pupae for six to 18 days before becoming darkling beetles. The beetles live for eight to 12 weeks, at which point they will die and need to be removed from the bedding. All of these stages—mealworm larvae, pupae and adult beetles—can be fed to your reptiles, though it’s typically preferred to feed them as mealworms. I also don’t recommend feeding the beetles because they’re the ones that are mating and laying eggs, and feeding too many of them will result in the collapse of your colony, with no new mealworms to sustain the population.

Mealworms are only as healthy for the animals that consume them as what the worms themselves eat. If fed a diet with low nutritional value, such as their bedding and nothing else, they will lack nutrition that will benefit your pet reptiles. They require some moisture, too, and placing thinly sliced vegetables or fruit such as potatoes, apples, lettuce or carrots on top of the bedding will provide this, as well as make the worms healthier for your reptiles via gut loading. 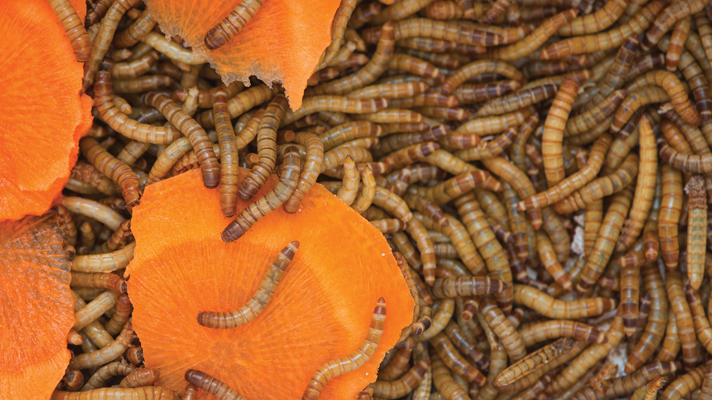 To make mealworms healthier for reptiles to eat, worms should be gut loaded using nutritious vegetables.

Mealworms aren’t picky and will happily eat other organic matter that’s normally discarded by humans, such as carrot tops, celery bottoms and other kitchen scraps. Providing such items is a great way to sneak vitamins and minerals into your worms’ diet.

Mealworms can be voracious and will need food replenished consistently. Scraps that are beginning to rot must be removed promptly to prevent the spread of mold or becoming a draw to pests such as fruit flies. Regardless of what you feed, rotate the food items you’re offering your mealworms to expose them to as many vitamins and minerals as possible, making them healthier for your herps.

Many herps love mealworms and readily snap them up, although larger species may sometimes ignore them because they’re so small. If your pet doesn’t show interest, try rotating out food. Offer your lizard other insects, such as crickets, locusts, soldier fly larvae or waxworms for a while, then switch back to mealworms. Variety in a reptile’s diet is recommended anyway, so consider feeding mealworms one day, then another type of insect the next time, then another, then back to mealworms. This is a good idea even if your reptile never tires of eating mealworms. 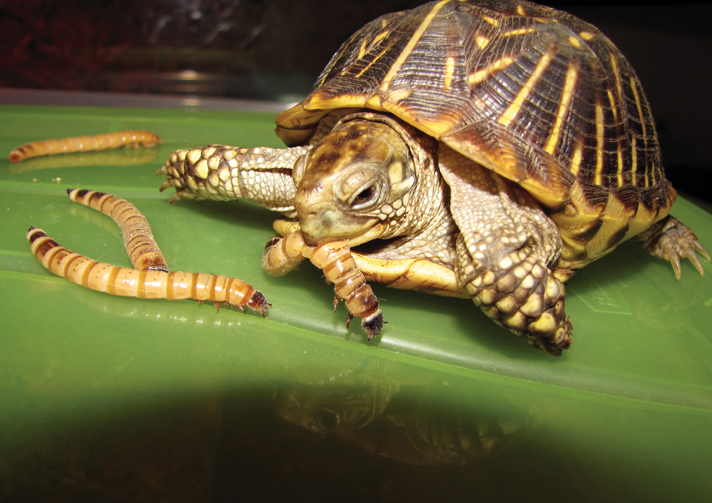 Mealworms are favorites of lizards, but turtles will eat them, too.

If mealworms are being refused, it’s also worth checking to make sure they are moving, as this stimulates a lizard’s feeding response. For omnivorous species such as bearded dragons, placing mealworms in a shallow dish with some fresh fruit or vegetables can get the worms to wiggle more actively.

There is much controversy over whether or not a live mealworm can chew out of an animal’s stomach. While some stand by their claims that mealworms can escape through a reptile’s body this way, killing the animal, there isn’t much evidence to support it. Experiments done on mealworms showed that while it was possible for them to survive in stomachs for short periods of time if eaten whole, they did not attempt to chew through, and it’s near impossible they would have the strength to do so, especially while being digested.

Some keepers may become concerned when whole mealworms are passed in a pet’s droppings, which also isn’t very common given how thin a mealworm’s exoskeleton is. If you believe your reptile is not digesting mealworms and therefore gaining nothing from them, consider feeding freshly molted mealworms; these are missing the exoskeleton that, for some animals, may be difficult to digest. Freshly molted worms can be distinguished from the rest of your colony by their pale, off-white color.

Exotic Insect Feeders For Your Herps

Another debated topic is whether or not mealworms should be dusted with calcium or vitamin supplements before being fed to reptiles. Many believe that if the worms are gut-loaded using nutrient-rich foods, as they should be, they are perfectly fine to feed as-is. Other keepers still prefer to dust mealworms prior to feeding. If you worry your reptile isn’t getting enough nutrients, it may be a good idea to consult with your reptile vet and get his/her opinion.

Other Uses for Mealworms

In addition to being fed to pet reptiles, there are other uses for mealworms that may make a colony more cost-effective for your budget, depending on your hobbies. Another popular use for them is as bird food for both pet softbills (such as finches and canaries) and various wild birds. Many backyard birdwatchers love using mealworms to attract bluebirds, which don’t typically eat seed and can, therefore, be reluctant to come to feeders. They attract a variety of other common backyard birds, too, such as robins, chickadees, wrens and others. 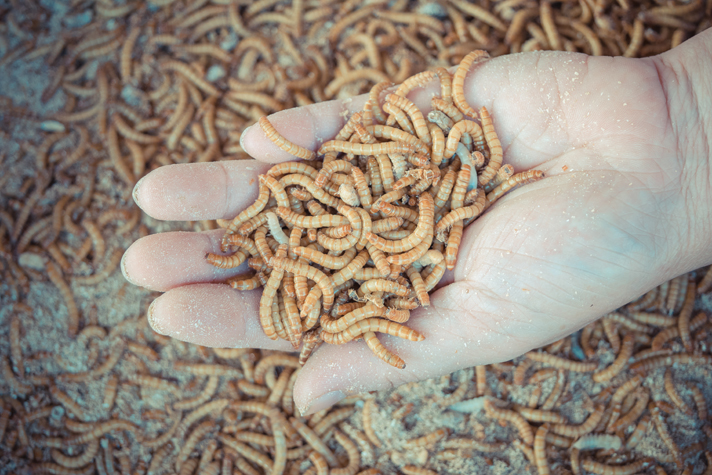 The author recommends you begin your colony with at least 2,500 mealworms. Note that they usually cost less when purchased in bulk.

Mealworms are also used as fish food by some fish keepers. It’s recommended that you feed them to larger fish, such as koi, larger goldfish and cichlids such as oscars, rather than smaller common pet species such as bettas, tetras, livebearers such as swordtails and platies, and smaller goldfish. Some keepers recommend cutting the mealworms’ heads off before feeding them to fish. Mealworms can also be used as fishing bait for fish like trout, perch, bluegill and crappie.

Mealworms are an ecologically friendly source of protein for people, too, and if you can get past the ick factor they may be a nice addition to your diet as well as your pet’s. While the thought may make some people squeamish, dry-roasted mealworms can be stored for up to a year without refrigeration. They can be dipped in chocolate, used in soups or added to salads. They are said to taste like peanuts (a description I agree with, as I have eaten them myself) and can also be used as a peanut substitute in cakes, cookies and other prepared foods. While dry roasting is one of the more popular ways to prepare them, there are many other methods, including pan frying. It’s not generally recommended that you eat mealworms raw, and any you do plan to eat should be humanely killed prior to cooking. The FDA does recognize mealworms as a food product, depending on the individual brand/manufacturer, but many brands are FDA approved.

Raising a mealworm colony can be done relatively simply with the proper resources and some daily commitment. With proper feeding, semi-frequent cleaning and general upkeep, you can raise healthy mealworms to keep your hungry reptiles happy, and save some money while you’re at it.

Patrick Kuklinski is a writer and pet owner who raises mealworms as a hobby.