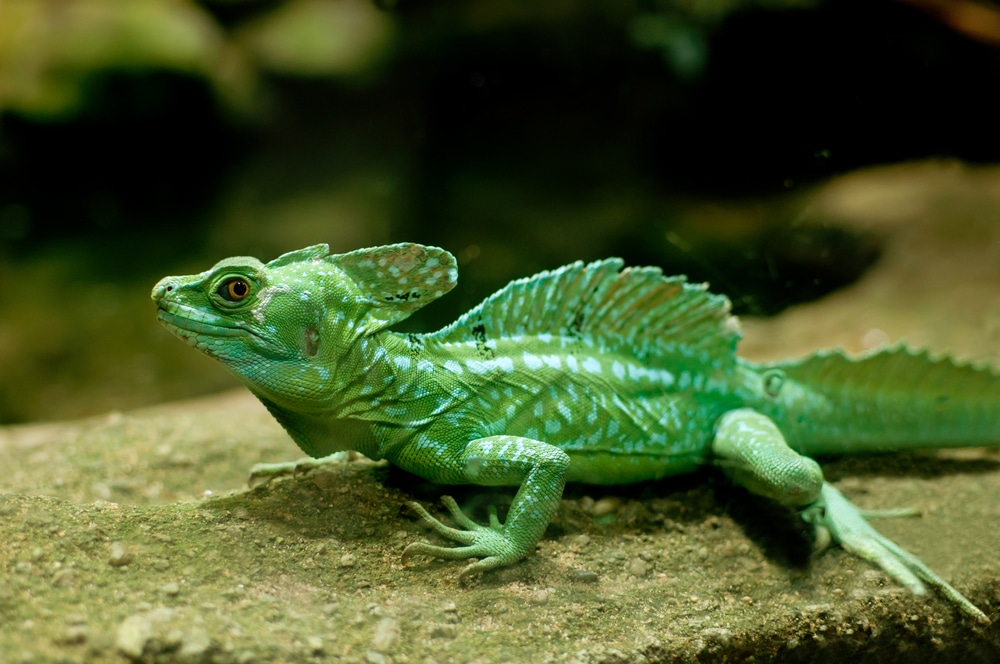 Although the plumed basilisk is usually tame in captivity, exercise caution when handling even tame specimens.

With piercing, neon yellow eyes against a canvas of brilliant emerald green, the plumed or green basilisk is both feared and revered as one of the tropical rain forest’s classic natural enigmas. With such brilliance and timeless beauty, it’s no wonder this creature stays the power of legend like the fictitious reptilian beast for which it was named, believed by some to turn one to stone with just a passing gaze! Respected throughout the ages and still today, some native Indians believe the modern-day basilisk possesses fantastic powers.

First described by Edward Drinker Cope in 1876, the plumed basilisk (Basiliscus plumifrons), derived from the Greek word “basiliskos,” meaning “little king,” in reference to the animal’s crownlike head adornment, is undeniably the most beautiful and dramatic of the four species recognized in the genus. Their colors are intense shades of electric green, typically patterned with white, yellow or bluish scattered specks, and may even be found in uniform shades of yellowish green or powder blue, with little or no pattern.
This species is sexually dimorphic, and the male Basiliscus plumifrons, dressed with a pair of high cranial crests and vertebral sails that run the length of the body and the tail, is without question dressed to impress! Soft in appearance, the basilisk’s vertebral crests are actually ridged to the touch, affording some degree of protection against predators, and they likely serve as a means of thermal regulation by diffusing heat. 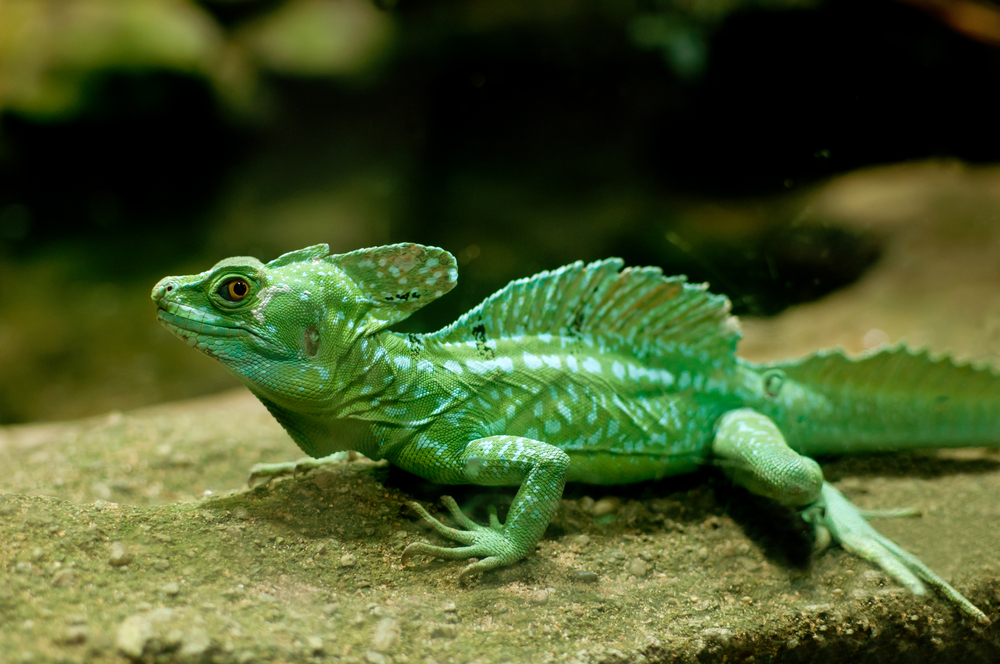 The female is much less impressive in form and has a smaller or sometimes absent cranial crest and a modest vertebral ridge made up of small, polished, rectangular scales. The female is more likely to carry over the banded pattern of juveniles into adulthood than the male. A moderate-sized lizard, the plumed basilisk reaches an adult size of 24 to 30 inches, two-thirds of which is made up by the tail.

Both male and female plumed basilisks are agile and equipped with long digits ending in razor-sharp nails that allow for rapid ascent into the trees. The rear toes are lined with small, downward facing scales; this increases the surface area of the toe against the water surface, enabling the basilisk to make a bipedal escape from potential aggressors. Although the ability to run across the surface of water is most notable in basilisks, it has also been noted in species of convergent evolution, such as the Old World sailfin lizards of the genus Hydrosaurus. Because of this ability, the basilisk is sometimes referred to in its native haunts as “lagarto de jesus cristo,” or Jesus Christ lizard.

Members of the genus Basiliscus are found in Central America, from southern Mexico to northern South America. Specifically, the plumed basilisk is found from Guatemala to Costa Rica. It is commonly seen along large waterways and inlets that are surrounded by lush, dense forests, and it is here that its numbers are greatest. Although it may be found in treetops as high as 50 feet, the basilisk is typically a creature of the exposed lower canopy near the water, which it may use for hunting or to escape approaching danger.

A virtual anomaly in the pet trade, the plumed basilisk is not as readily available as it once was. In my youth, it was not uncommon through the 1970s and 80s to encounter the occasional imported specimen, parasite ridden and emaciated, sporting a torn up face from rubbing against abrasive surfaces in an endless effort at escape.
Thanks largely in part to educational publications such as REPTILES magazine, the widespread promotion of captive breeding in common and obscure species such as this has done wonders for the basilisk, and now most if not all specimens encountered in the industry are the immaculate products of dedicated hobbyists.

Though it can be found through private breeders, there is still no huge demand for this species. This may be due in part to the once accurately carried stigma: that they are difficult to care for and usually do not thrive. Today’s finest individuals will have brilliant, wide-open eyes, smooth skin and a straight, uniform tail. Check specimens for toe and mouth injuries. Note that juveniles should be skittish and are not as brightly colored as adults.

Plumed basilisks require a lot of room to roam. A large enclosure can be easily constructed out of two-by-fours and masonry screen for the sides and ceiling. At best, it should be 5 feet wide by 4 feet deep by 7 feet tall. A cage this size can house anything from one pair of plumed basilisks to a couple of males and four females. I do not suggest more than six adults. This type of enclosure should be designed with caster wheels on the bottom for easy movement. 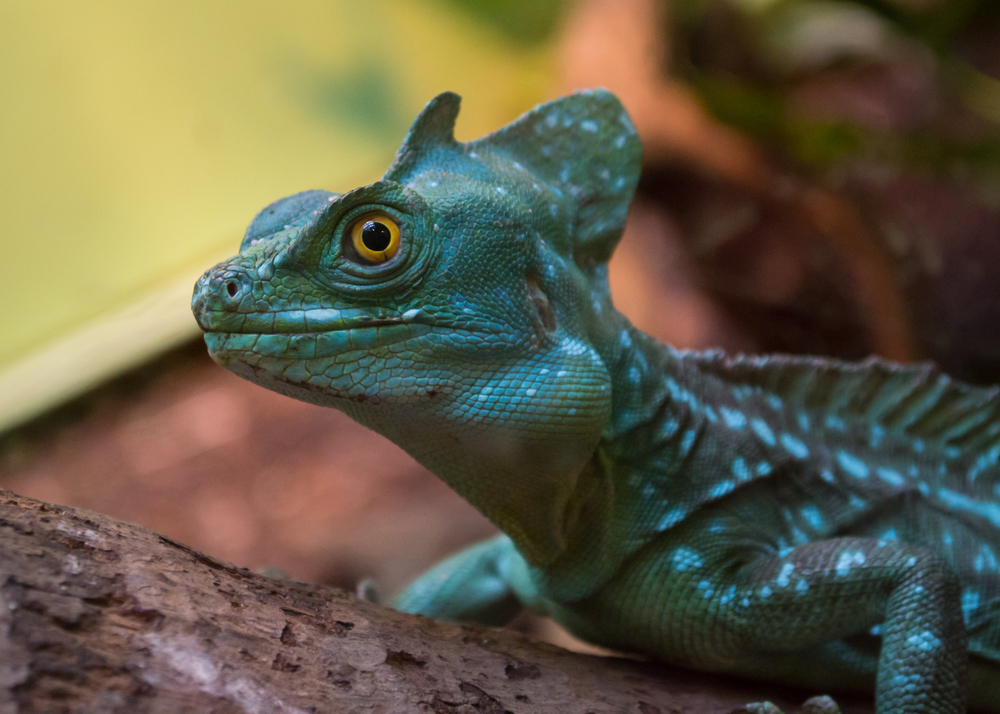 For those keepers with less room or perhaps less building skill, an old bureau can be redesigned to house your captives. Knock out the drawer supports and replace them with screen. Remove the top of the bureau and replace with hinges for easy access. Cutting out the center of the bureau top and replacing it with screen will allow you even better air circulation and somewhere to place your overhead lighting.

Cage décor should be chosen by considering ease of maintenance, durability, animal well-being and visual appeal. It is imperative that the environment’s decorations are secure, allowing inhabitants to free themselves easily when digging beneath objects or while searching for food. They should be able to climb safely without falling and risking injury. Artificial plants instead of live plants are recommended, because live plants are easily damaged and require their own special care. Place artificial foliage against a stronger, more secure base network of branches.

As a substrate, I have always used a thick, 5- to 7-inch layer of ground pine-bark mulch. This material allows for water retention, and its acid content inhibits the growth of harmful bacteria, mold and fungus. This type of substrate will also encourage females to dig and give gravid females a place to deposit eggs.

True to the form of all naturally arboreal lizards, the basilisk is fueled by the sun and thrives only within its presence. Natural light gives basilisks the opportunity to process precious vitamins and helps them maintain an overall proper physical and psychological biorhythm. Because it is not always possible to provide natural sunlight for our captives, it is necessary to offer it in an artificial form. Full-spectrum lighting is essential for the lizard’s health. The number of lights will be determined by the size of the enclosure. For the large, closet-sized enclosure I have described, I would suggest at least two full-sized lights (four bulbs).

An additional outdoor enclosure is highly recommended with this species to afford it the maximum benefits of natural sunlight.
It’s a common misconception that animals from Central and South American tropical forests must be kept within the range of extreme temperatures and humidity while in captivity. On the contrary, I have found that a relative humidity of 50 percent to 70 percent and temperatures within 72 degrees to 85 degrees Fahrenheit will suffice when adjusting the temperatures seasonally. It is my opinion that greater humidity and heat will likely increase the probability of respiratory problems and possible skin disorders unless the caging is designed for air circulation and subjected to natural sunlight to prevent mold, fungus and/or bacteria.

When heating large, open enclosures, it is sometimes best to heat the entire room. This is usually easy in the warmer months, when rooms can be heated via sunlit windows.
Floodlights can be used to obtain comfortable basking temps of 85 to 90 degrees in the winter months, when a cooler ambient temp would be more likely under natural conditions.
Provide fresh drinking water to this species at all times; keep the pool small and easily removable from the cage. Although the basilisk is fond of water and can sometimes be found resting fully submerged in larger containers, this animal will defecate almost daily in its water basin, making maintenance rather challenging. In nature, defecation in water helps to prevent feces from drying beneath the vent and tail and may make the basilisk less easy to detect by predators. A strong daily misting of the captive environment will not only increase the humidity and add a sense of environmental enrichment, but will also allow the basilisk an opportunity to drink from droplets that have settled on artificial foliage.
For keepers with more time and creativity, creating a display vivarium with a large decorative pool of water and functioning filtration will be well worth the extra effort.

The basilisk is an omnivorous species that is greatly attracted to motion and will feed daily. It is fond of crispy invertebrates, such as mantises, crickets and beetles, as well as small vertebrates, such as snakes, fish and other lizards. Any nonvenomous snakes and fish or lizards that are small enough to be swallowed whole will suffice. These specific vertebrates are not essential in captivity as long as some whole vertebrates, such as mice, are used. Always use small juvenile mice (just weaned) to reduce the amount of mess and allow for easy swallowing. Basilisks will readily take pre-killed/freshly thawed food. The sweet smell of fruit is often appealing to this species, and fruit should be offered along with occasional fresh greens, such as collards or dandelions. It is strongly recommended that this species be given a wide variety of food items along with whole vertebrate animals; this will keep your basilisks happy and healthy.

Although the plumed basilisk is usually tame in captivity, it is equipped with powerful jaws and razor-sharp nails. Exercise caution when handling even tame specimens. If bitten, you are in for a world of hurt, and it is virtually impossible to free yourself from the jaws of an adult basilisk without severely damaging the specimen. If bitten, do not struggle! You will find that the basilisk still has the capacity to bite even harder! A few drops of vinegar in the animal’s mouth should help to free your finger.

It’s possible that the demand for plumed basilisks will grow in the coming years, as more keepers realize that these stunning creatures make wonderful pets. With proper husbandry, it’s believed that these charming captives can live for 15 years.

LEO SPINNER has been keeping, breeding and field researching herps of all types for more than 39 years. Born and raised in Cape Cod, Mass., he currently resides in southeast Pennsylvania with his family. You can learn more about him and his work at skinandscales.net.