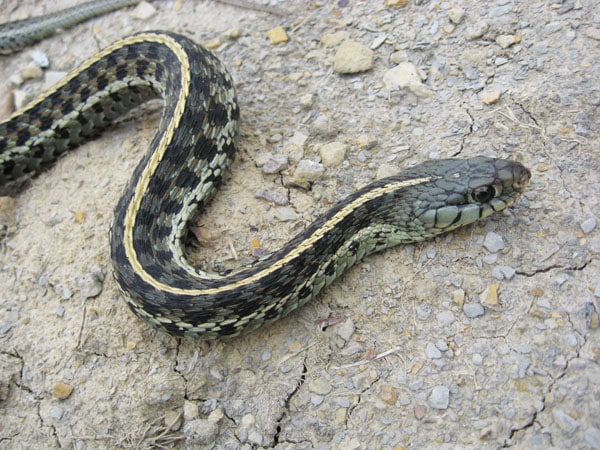 Easy to find and simple to keep, the eastern garter snake remains one of America’s most popular serpents.

The Natural History And Captive Care Of The Northern Water Snake
Causes, Prevention, And Treatment Of Snake Mites, Acariasis
Snake Not Shedding Completely

The eastern garter snake (Thamnophis sirtalis sirtalis) is one of the most wide-ranging, variable and interesting reptile pets. Because of the eastern garter snake’s abundance, bright colors, small size and willingness to live near people, seeing and catching one often sparks a childhood fascination with reptiles that can last well into adulthood.

Many budding herpers have gotten their start in the hobby keeping these common, inexpensive and relatively easy-to-maintain snakes. Upon reaching adulthood, males are 18 inches or longer, and females are usually 24 inches or more.

Although initially defensive, most wild-caught garters adjust to captivity well and quickly become as tame as a corn snake. They also become willing to eat (sometimes taking food from their keeper’s hand) and reproduce readily in captivity. As an added bonus, they are livebearers, so there’s no need to buy an egg incubator and be concerned as to if the temperature and humidity in your incubator is correct. There’s nothing quite like looking into your snake’s enclosure one morning and seeing a couple dozen squiggly mini-replicas of your adult garters crawling around the cage. 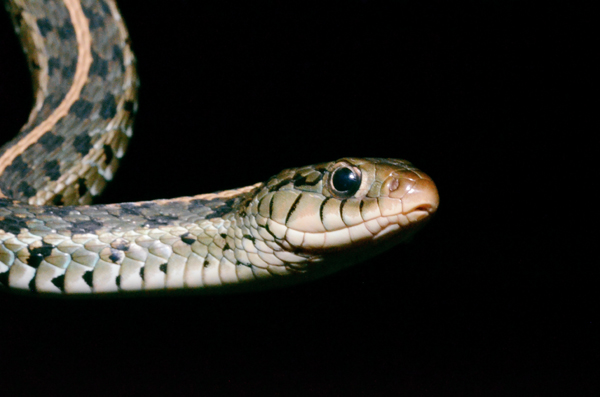 Although defensive at first, even wild-caught garters can become tame for the patient keeper.

For a long time, garter snakes have been underappreciated in the United States. They have, however, enjoyed favoritism among European hobbyists for the past few decades. In recent years, there’s been an increased interest in captive-bred, color morphs and locality-specific eastern garter snakes, which are often distinct in appearance. Although current Ohio regulations are too excessive for my liking, and I no longer keep eastern garters, what’s regarded as a popular “starter” snake has provided me with much enjoyment in the years when I used to keep these common reptiles.

Thamnophis is the single most widely distributed reptile genus in North America. Garter snakes can be so far ranging partly due to their varied diet and adaptability to different habitats. In addition to basking on lakeshores, eastern garters can occur in a wide variety of other environments. I have found them on trails in the woods; underneath the bark of fallen trees; beneath artificial cover, such as plywood and tin, as well as natural cover, such as rocks and logs. Their range covers almost the entire eastern half of the United States as well as parts of Canada. Within that distribution, eastern garter snakes can be found in a diverse variety of habitats, often inhabiting meadows, woodland clearings, creeks, hillsides and urban areas — sometimes I’ve been lucky enough to find them in my backyard. They are indeed habitat generalists, utilizing a number of different environments. 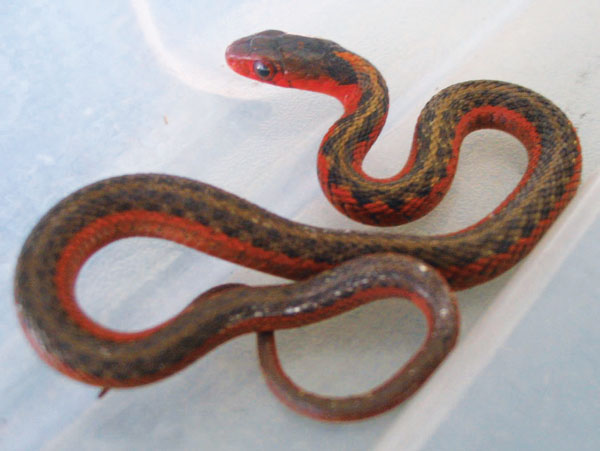 I have also seen garters in all seasons, including winter, basking in the sun with patches of snow on the ground. The easiest time to find them is in the spring, when males actively search for mates. In spring, these snakes bask in plain sight as well as seek the heat stored by artificial cover, such as pieces of plywood or metal. When discovering these snakes underneath artificial cover, it is not unusual to find them in the company of other snake species.

Although seeing a garter in the wild may be pleasant, catching one isn’t necessarily an agreeable enterprise. They have a grab bag of defense tactics, including flattening their body to appear larger, smearing musk and fecal material on their captor, and biting. Experienced herpers take this all in stride, but newcomers may be put off. The eastern garter’s relatively small size makes its defensive tactics inconsequential to most herpers who want to catch one. Although these snakes average 18 to 30 inches, they can sometimes get much longer, especially females. The largest wild specimen I’ve encountered was a 32-inch female in Huntington Beach State Park in South Carolina.

Not a Garden-Variety Snake

Often incorrectly called “garden snakes,” this snake’s genus earned its common name because people once described its stripes as resembling a garter. Although the “classic” form of this snake is marked with three yellow stripes (one down the back and one on each side) on a background color of black or brown, there are several variations to this theme. Some individuals can have a bold spotted or checkered pattern, or the vertebral stripe may be absent. The yellow stripes can be tinted green, blue, orange or red. Within a two-hour drive from my house in greater Cleveland, melanistic (all black), “stripeless,” orange striped or “standard issue” garters can all be found, depending on which direction I drive. As with many snakes that have a very wide range, the eastern garter is extremely variable both in coloration and in pattern.
In addition to their variable appearance, eastern garter snakes vary their diet according to the environment they inhabit. The melanistic form preys primarily on fish in the wild, due to its proximity to the Great Lakes. Once, while on a family outing in Akron, Ohio, I observed a young eastern garter snake swallowing an American toad (Bufo americanus) sideways. 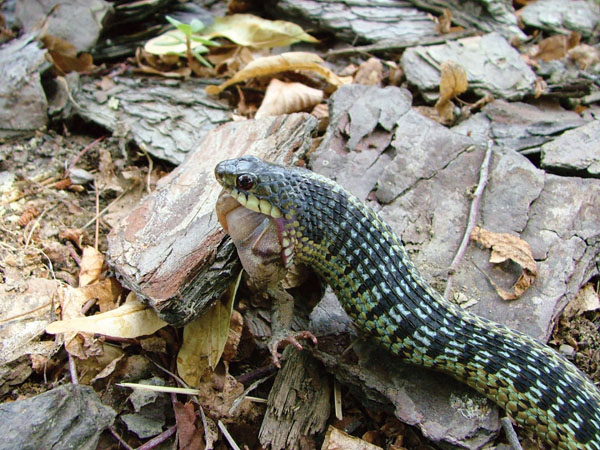 This eastern garter was spotted swallowing a toad sideways at a nature center in Akron, Ohio.

Wild garters will also eat earthworms, slugs, frogs, tadpoles, salamanders, nestling birds and rodents. Their opportunistic feeding habits are one of the reasons that these snakes are so successful. In captivity, feed adults one mouse every five days.

A number of hobbyists who keep corn, king and other popular rodent-eating snakes have expressed their lament to me after setting their pet up in a naturalistic enclosure with plants, rocks, a realistic looking “rock” water dish and spotlight — only to find that their reptile remains hidden the majority of the time. This is merely the crepuscular nature of these animals. However, putting an eastern garter snake in the same setup yields some very different results. These snakes like to bask under spotlights and often busy themselves with exploring their cage. Because they eat small, frequent meals, the opportunity to observe their hunting and feeding response can occur with more regularity than with some other snakes. 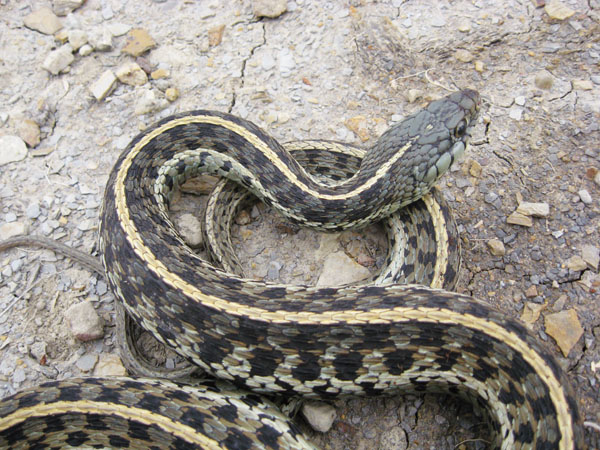 Their small size means that garters won’t destroy plants and cage furnishings in the way larger constrictors can. In addition, these snakes can often be kept in pairs or in small groups. This permits the keeper to witness their interesting social interactions.

I1I Substrate. I use ordinary potting soil with about 20 percent sand mixed in. Substrate should be at least 3 inches deep to allow plants to grow in the enclosure. Over the top of the soil, I place either a layer of dried leaves or cypress bark. This is important, because soil can hold moisture, and although garter snakes are often found in moist habitats, their skin must be kept dry. Otherwise they may develop skin infections. The layer of leaves or bark ensures that when on the cage floor, the snake will be dry. The moisture underneath helps keep the terrarium humidity at a moderate level between 40 and 60 percent.

I2IPlants. I like to include some live plants in my garter snake enclosures. By far the easiest terrarium plant to keep is pothos (Epipremnum aureum). Pothos is a vine with heart-shaped green leaves featuring different color variations of white and yellow, depending on the variety. It is durable and tolerant of a wide range of light and watering conditions, making it an ideal terrarium plant. I’ve had moderate success with a few other types of houseplants, but for me, pothos is my “old standby.” In my experience, arrowhead (Syngonium podophyllum) and Chinese evergreen (Aglaonema modestum) are almost as hardy as pothos.
If you have live plants planted in the soil, when watering them, pour water near the base of the plant to limit substrate saturation. You can also plant them in pots.

I3I Basking Lights. Like most snakes, garters don’t require ultraviolet light. Pothos doesn’t either, so an incandescent bulb in a spotlight fixture at one end of the cage works well for creating heat and light. If kept at room temperature, a 40-watt bulb should be enough to create a hotspot between 84 and 88 degrees Fahrenheit. The cool end of the enclosure should be between 68 and 72 degrees. Be sure to check cage temperatures using a reliable thermometer.

I4I The Right Hide. A variety of naturalistic options exist in providing hiding areas for garter snakes. Cork bark provides a nice flat surface for them to hide under. There are some commercially available, naturalistic-looking caves on the market as well. Crafty keepers can build their own custom hiding areas out of stone or wood. The hide should be large enough for the snake to curl its entire body inside.

I5I Water Dish. This should be large enough to allow the snake to completely submerge itself and soak. Garters require only moderate humidity; a water dish is all they really need to meet the humidity needs stated previously.

I6I Branches. Although eastern garters are often found on the ground in the wild, tame captives will climb and often use a limb as a basking site. Position a branch under the spotlight. Alternatively, a shelf made of cork bark can be created in the enclosure with a branch allowing access to it.

When set up properly, a terrarium can provide a great deal of enjoyment. When done well, the display will offer the keeper the opportunity to see their reptile exhibit a wide range of behaviors in an attractive, naturalistic setting.
Eastern garter snakes are one of the most popular, interesting and widely available reptile pets. They are often among the first reptiles owned by children and budding herpetologists— though they offer an attractive alternative to advanced keepers, too. For those who like something more unusual, there are a number of captive-bred morphs available, including albino, snow, erythistic, axanthic, flame, etc. Keeping and breeding these snakes in naturalistic terrariums allows hobbyists to have a reptilian “slice of life” at home.