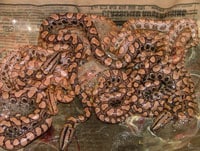 How To Breed Beautiful Rainbow Boas

Rainbow boas (Epicrates cenchria) are easy snakes to maintain and breed in captivity. I succeeded in breeding this species on my very first attempt as a young teen. I’ve had at least one litter of babies every year since. For this article, I will focus on one main point about breeding rainbow boas, but this saying applies to numerous other species. Snakes do not need your help to reproduce. They have been successfully reproducing for thousands of generations without any assistance. If your snakes are healthy and happy, they will have babies. But this means you need to provide the right environment and care. 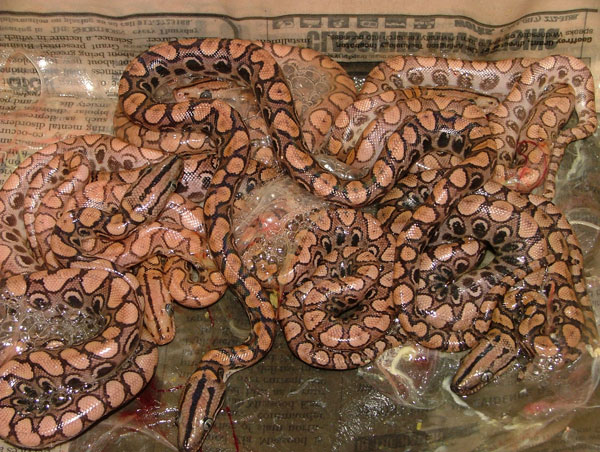 Rainbow boas are a very rewarding species to keep and they are easy to breed in captivity.

To provide your snakes with the best husbandry, read the article in the August 2012 issue of REPTILES magazine. The following information is not a strict recipe for successfully breeding rainbow boas. It is a starting point. I’m going to describe my observations, my experiences, and what I have learned from snakes and other snakekeepers.

First, you need to have a male and a female. Before I learned this foolproof method of sexing young males, I accidentally tried several times to breed two females together, obviously without success. It is important to learn how to determine the sex of rainbow boas so you do not repeat my mistakes. Don’t take it on faith that your animals were accurately sexed when purchased. Some people probe, some people pop, but I prefer to palpate. You can palpate a male rainbow boa’s tail and feel hemipenes from the day they are born.

Starting at the vent and sliding your fingers toward the tip of the tail, apply a little pressure on the dorsal and ventral surfaces with your thumb and forefinger. About one-third of the way toward the tip, males will have two little bumps inside their tail. These are the tips of the hemipenes, and they feel like two tiny grains of rice in the snake’s tail. If you feel this, you have a male. I like this method because I am at least 95-percent accurate on gender. It is quick and relatively stress-free with respect to the other methods of determining sex in snakes.

Breedable animals need to be healthy, big enough to breed and have proper body condition. Female rainbow boas need to be at least 2 1/2 years of age, but waiting 3 1/2 to 4 1/2 years is better. Young females seem to have more complications and are slower to recover after giving birth. Proper body condition is signified by good girth, body weight and muscle tone.

I do not weigh my animals like other breeders do, but at least 1,500 grams seems to be the consensus for breedable females. I recently got a good scale, but prior to this, I used what I called the “toilet paper trick.” If a female can fit through the cardboard center of a toilet paper roll, she is too small. Males can breed much younger, about 3 feet and 18 months of age. I have males and females breeding into their mid-teens and have heard reports of 24- to 25-year-old females having healthy litters.

The breeding season seems to be at least partially determined by the light cycle, shorter days and longer nights. I accomplish this by having windows provide seasonally adjusting daylight, and I avoid any artificial lighting during the night hours. The breeding season is also triggered by cooler temperatures. Temperatures can drop into the 60s at night, but make sure that the animals have access to a warm spot for at least a few hours each day. With the warm climate in Central Texas, I start the cooler season around December and start warming the temps back to normal in mid to late February.

During this cool season, I typically place animals in breeding trios so the male has constant access to two females each season (1.2). If you have an ultrasound and know when females are approaching ovulation (30-millimeter ova), you can introduce the male during the time each individual female is most receptive. I have had males sire up to four fertile litters, but two or three litters in a season is more typical. Having an extra male may be useful to stimulate an unwilling male to breed, but this is rarely needed. Males typically go off food during the cooler breeding season even if females are not present, so do not be alarmed by this.

Females may eat during the breeding season, but healthy females can go through the whole pregnancy process without eating any meals. My animals show a distinct preference for small meals during this time. Some females that never refuse rats during the year will only accept adult mice while they are pregnant. Even if they will eat larger meals, I recommend feeding only small meals during follicle development and pregnancy. The female’s limited internal space becomes full of the developing ova, and adding large meals may stress her body. I believe that there are some internal pressure sensors that tell the female she is running out of space and to stop growing additional ova. If you feed a large meal, you may trigger this pressure sensor and the female may grow ova smaller in size or fewer in number.

Females swell mid-body while developing follicles. This swelling lasts for several weeks, during which time the females may occasionally rest in an inverted position (belly scales up). My females also have an increased preference for soaking in the water dish during this time, possibly to relieve the extra weight and pressure. As the female ovulates, there is a large mid-body swelling. The ovulation lump is quite obvious, but it only lasts for several hours and is easy to miss. After ovulation, the swelling shifts toward the back third of the snake’s body.

Just because you think the female looks pregnant, do not remove the male. Each ova has to grow to about 30 millimeters before ovulation/fertilization. The female looks pregnant because she has an extra 15 to 30 golf-ball sized ova developing inside her. A less experienced reptile breeder may assume the male did his job and remove him. This is probably the biggest mistake a boa breeder can make. It is most productive if the female boa is bred close to her ovulation because the sperm is fresher and more active. Having the male with the female too long is not a problem, but separating them too soon may lead to increased numbers of infertile ova (“slugs”) in the litter.

Females hug the heat after ovulation. You can increase the hotspot timer to provide additional hours of heat each day, but the temperature should still remain between 80 to 90 degrees Fahrenheit. Some females will use the hide box over the hotspot, while others will push the hide out of the way and sit directly on the heat. I often throw a bunch of crumpled newspaper over the hotspot, which acts as insulation and keeps the female at a more constant temperature when the heat timer goes off at night.

Rainbow boas give birth about 90 days after ovulation. When the expected birth date approaches, I remove most of the water from the soaking tub. Females like to give birth in the water, and I have had babies drown if the water is too deep. Baby boas are born in individual membranous yolk sacks, which they have to break out of before they take their first breaths. By keeping the water level less than 1 inch deep, any babies born in the soaking tub can easily poke their nose out of the yolk sack and the water. Females also like to give birth in the moist hide area.

Babies will stay near the mother for a few hours and sometimes a few days, but soon they scatter and find their own place to feel secure in the cage. Make sure the cage does not have any holes, cracks or gaps that baby rainbow boas can squeeze through.  It is amazing to open a cage that only had one snake in it the night before and find a much skinnier mom surrounded by dozens of alert little eyes. There are many reports of new mothers eating unfertilized ova, but I have never witnessed this firsthand. I have never heard of rainbow boas eating their babies; in fact, females are quite protective of their babies. Use caution when removing babies from the mother’s cage.

I suggest putting baby boas in their own sterile cage as soon as they leave the slimy yolk sacks. I use Container Store brand shoe boxes (made by IRIS plastics) with paper towel substrate, a 16-ounce squat deli cup for a water dish, and another deli cup with crumpled newspaper as a moist hide box. In this system, snakes cannot knock over their water dish because the lid prevents the deli cups from tipping over. Baby rainbow boas always seem to find their way to the very center of the crumpled newspaper and rest there coiled up in a tight ball. An easy way to poke ventilation holes in plastic boxes is to use a soldering iron in a well-ventilated area or outside. The soldering iron melts its way through the plastic and leaves smooth holes. A drill with a sharp drill bit will also work, but if you put too much pressure, the plastic will crack. To make larger-diameter holes in plastic, you can get an empty tin can the appropriate diameter, clean any food out of it, take the paper label off, place it on the stove until the rim gets hot, pick it up with insulated stove gloves, and poke a hole where you want it. I use this tin can method to poke smooth access holes to the snake hide boxes.

Rainbow boas will reproduce under a wide variety of conditions, and I have heard numerous different recipes for success. Baby rainbow boas will readily accept fuzzy-size mice and newborn pinky rats. More than 90 percent of my babies eat the first meal offered, and most of these eat before they have their first shed. Recently, I read that you should wait until after the first shed to feed baby boas in case there is still some internal development after birth. I have never had problems feeding before the first shed, but given that there is no problem waiting for a week or two before the babies eat, waiting may be the preferred method.

Rainbow boas are a very rewarding species to keep and they are easy to breed in captivity. If you have healthy and happy adult rainbow boas, you can certainly experience the joy of watching the cycle of life continue as it has for thousands of generations before.

Bryan Hummel has kept and bred rainbow boas for 20 years. He is the founder of rainbowboas.com. Bryan specializes in rainbow boas and carpet pythons. His master’s degree is in biology, and he works in the environmental field on habitat conservation, erosion control, regenerating damaged lands and increasing groundwater recharge.