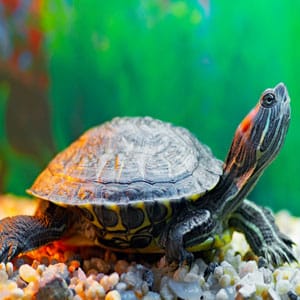 Enclosure was damaged by vandals, which enabled the turtles to escape.

More than a thousand turtles escaped from a Georgia turtle farm after vandals removed the metal siding from the enclosure that helped to house the chelonians at the farm, according to a report in the Times Free Press. Farmer David Driver, who says the break out resulted in the loss of four years of work, believes the thieves were after the metal siding as his truck's lift gate was also stolen.

Driver farmed all types of turtles, including snapping turtles, soft shelled turtles, eastern painted turtles, yellow bellied sliders and even common musk turtles, aka stink pot turtles, primarily for the pet trade as well as the food trade in China. Driver had four ponds on his farm and after draining them, he estimated his losses at more than 1,600 turtles. Driver, who has been farming turtles for close to four years, was previously a turtle trapper before he got into the farming business. He says there are only three other turtle farmers in the state.