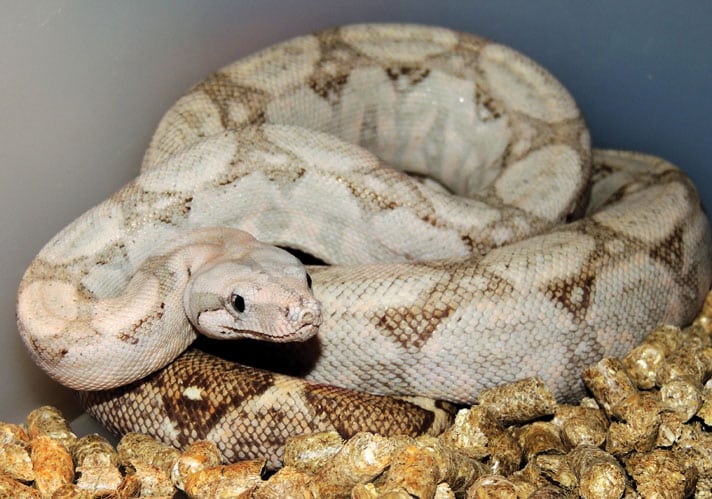 The Hog Island boa is a morph of the common northern boa subspecies B. c. imperator

The well-known and widely kept boa constrictor (Boa constrictor) has long been one of the most popular pet snakes available in the reptile-keeping hobby. In nature, it is a large-bodied ambush predator with a far-reaching range throughout South America, with introduced populations on St. Croix and in Florida. 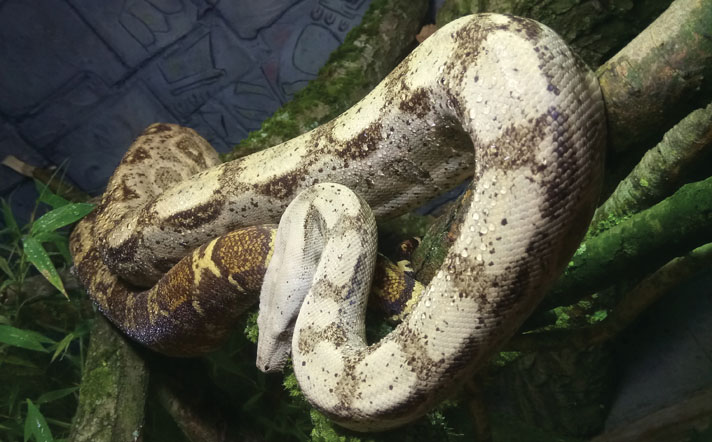 Male Hog Island boas seem to bask out in the open to a greater degree than the females.

Boa constrictor has been separated into a variety of subspecies that vary in range, appearance and behavior. The Hog Island boa is a morph of the common northern boa subspecies B. c. imperator – it’s a population within a subspecies. It is a stunning boid that is famed for its calm temperament and interesting coloration.

Found only on the Hog Islands, or Cayos Cochinos, in Honduras, the Hog Island boa has been considered something of a rarity in collections, though its popularity and availability have increased in recent years. Sparsholt College in Hampshire, England, maintains Hog Island boas in preparation for future breeding projects.

Separated from the remainder of the northern boa constrictor population, the Hog Island boas have deviated in terms of size, coloration and feeding habits. The Cayos Cochinos are largely covered in rain forest and host to relatively few mammal species. For the boa, which normally takes advantage of mammalian prey, this has resulted in changes in diet and behavior.

Hog Island boas spend more time within tree branches in search of prey, and they demonstrate a greater reliance on birds as a food source than other boa constrictors. Migratory birds use the Hog Islands as part of their annual journey, and Hog Island boas take advantage of this transient food source.

The Hog Island boa is also considerably smaller than other types of boa constrictor. This is due to insular dwarfism, a process by which island animal populations become smaller than their mainland relatives. For example, while the average female boa constrictor reaches lengths between 7 and 10 feet, the Hog island boa females are normally between 5 and 6 feet. This same type of dwarfism has been observed in species as diverse as sloths, hippos and even elephants. 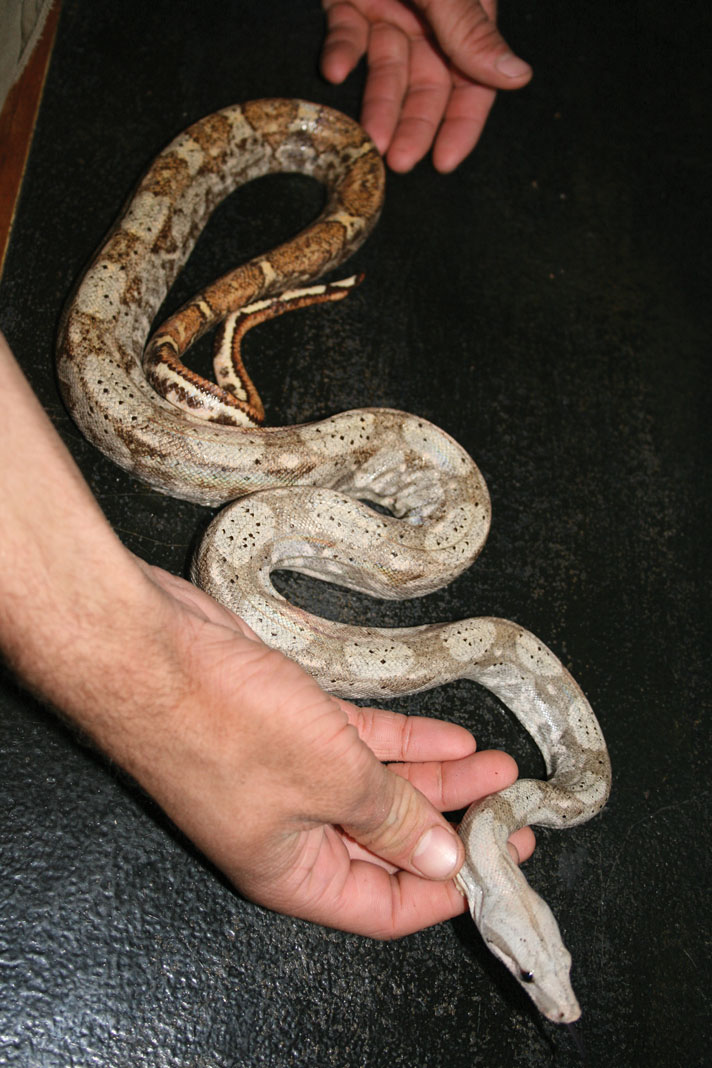 This is one of the wild Hog Island boas that was found while conducting population surveys on the islands.

Another way the Hog Island boas differ from their mainland cousins is in coloration. The Hog Island boa is hypomelanistic, meaning it’s considerably lighter in coloration than other boa constrictors. This lighter coloration adds to the boa’s appeal to boa hobbyists.
One of the Hog Island boa’s most endearing traits is its calm temperament. While some boas may be challenging to handle, Hog Island boas are notoriously docile, meaning they can usually be easily handled. Fascinatingly, there appears to be a biological reason behind their docile nature. Unlike on the mainland, the snakes of Hog Island have relatively few natural predators. For these snakes, spending time in hiding is unnecessary, as there is nothing to hide from. There is virtually no selection pressure that warrants anti-predator behavior in these snakes, and over the years, this has resulted in an animal with a reduced ability to respond to perceived threats, whether they come from a predator or an enthusiastic snake handler!

As it’s not a species or distinct subspecies, the Hog Island boa cannot be given its own IUCN status; instead, it is lumped in with B. c. imperator. Historically, this distinct type of snake has been in considerable danger due to overcollection for the pet trade. With a range that encompasses a mere 37 miles, the wild Hog Island boa population is already restricted, and as a prized species for the pet trade, it was collected in great numbers from the 1970s onward. By the 1990s, so many Hog Island boas had been collected that it was believed the species had become extinct. 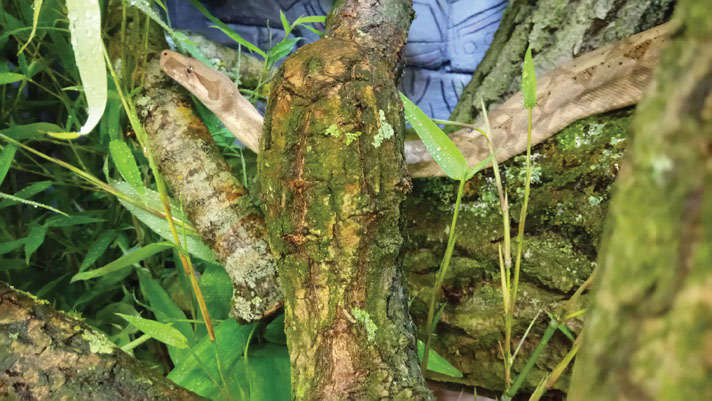 Since 2009, research has continued on the wild population of Hog Island boas, with a focus on genetics and hormonal analysis.

One of the authors, Emma, travelled to the Hog Islands in 2009 to participate in a boa population survey funded by Operation Wallacea (opwall.com), with financial support from the Institute of Zoology in London and the Durrell Institute of Conservation and Ecology (DICE). The goal was to determine whether the Hog Island boa population had recovered from previous pressures of over-collection.

Teams of surveyors were organized, and during surveys they would arrange themselves into orderly lines and walk across the terrain, searching for snakes. This sounds easy, but it was considerably difficult walking through the thick rain forest under the hot and humid conditions. The two islands are covered in a mix of grassland and dense forest, both of which are inhabited by the snakes. To find snakes, surveyors would turn over logs and vegetation, as well as investigate the branches of any trees that were encountered. Larger boas were usually found on the ground, and when found, the snakes were relatively docile and usually accepted handling without complaint. 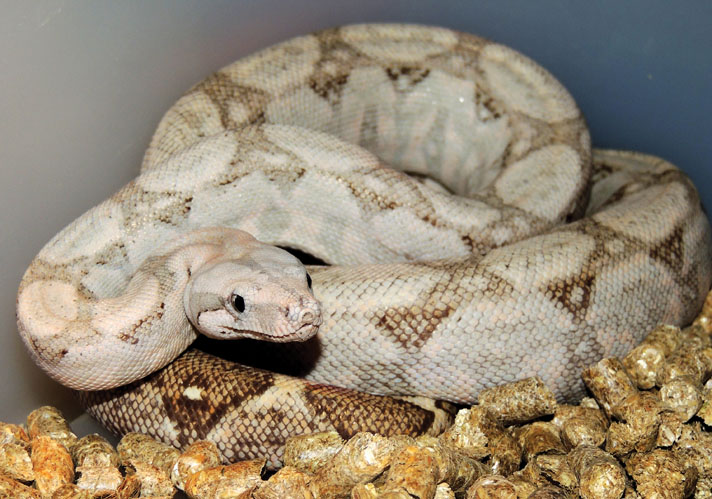 The surveys actually resulted in more boas than the surveyors were expecting to find.

The survey technique used was capture-mark-recapture. Each snake was marked by the insertion of a small PIT tag under the skin, which would allow researchers to determine whether a captured snake had been encountered previously. The size and weight of all snakes were recorded, including both the snout-to-vent length and tail length. Efforts were also made to determine the number of males and females in the population by sexing each snake based on the length of the cloacal spurs; the spurs of males are considerably longer than females, as they’re used to grasp females during breeding. If sex could not be determined by spur length, the snakes were probed.

Genetic data was also collected to identify the overall health of the population, via a small-scale sample that was taken from each animal. This also allowed the researchers to determine how closely related each snake was to other members of the population.

Overall, there were considerably more Hog Island boas than the surveyors originally believed to exist. Between the two islands, it was determined that there were about 700 snakes in residence. This was a much more positive situation than in the 1980s, when during one research effort only a single Hog Island boa was identified.

Since the Cayos Cochinos became categorized as a Marine Protected Area and the Honduran government prohibited the harvest and export of the snakes, the Hog Island boa population has begun to rebound, likely due to a reduction in illegal poaching of the snakes. Yet while surveys have indicated a population rebound it should be remembered that the snakes are still vulnerable. The wild population still may not have recovered fully from the over-collection of earlier decades, and a captive-breeding population may be essential to preserve the Hog Island boa for future generations.

Since 2009, research has continued on the wild population of Hog Island boas, with a focus on genetics and hormonal analysis. As the wild snakes had become increasingly rare, priority research has been undertaken to determine whether the rebounding population is inbred. Surprisingly, research suggests that the snakes have retained some genetic diversity, which bodes well for their future.
Further research has investigated stress and sex hormones in the wild population, to assess the potential impact of handling. While the snakes do show an increased stress response upon being handled, it is notable that the stress level is much lower in comparison to mainland boas. It is likely that this mirrors the reduced predator response that these island snakes possess.

We house our Hog Island boas in a large, walk-in enclosure containing live plants, including bamboo and living willow branches. Ultraviolet lights and basking spots encourage plant growth, and the willow growth resulted from adding broken logs and branches from a local forest. If provided with light and soil, these will begin to grow. 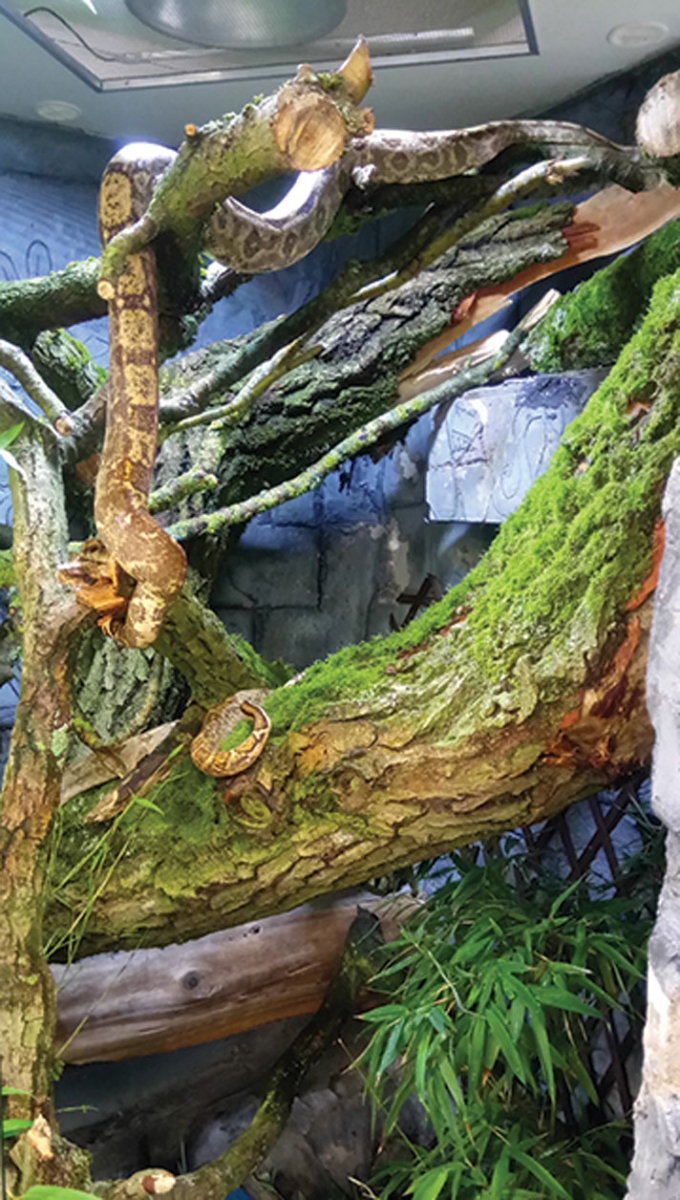 Inside the Hog Island boa enclosure at Sparsholt College.

The enclosure was built with a South American theme in mind. We used mock rock casting to create Mayan-esque stone carvings of reptiles around the outside of the enclosure. For access, we included 5-foot glass panels that can be slid open. These allow an unprecedented view into the enclosure and allow us as keepers to assess the behavior of the animals without opening the enclosure.
A large pool of water at the bottom of the enclosure allows soaking and helps to increase the humidity levels. Many sturdy branches are included, and the snakes regularly make use of these, though they are sometimes found actively basking in the open spaces as well. Males, in particular, seem to choose more open spots in which to rest, a behavior that was observed in the wild snakes, too, as males were far easier to spot in the wild.

The enclosure’s ambient temperatures range from 68 to 77 degrees Fahrenheit, with basking spots maintained at 95 degrees. Feeding consists of a large rat per snake every two weeks. Rats are well received by both sexes, though we have noticed females seem to show a greater enthusiasm for food.

As our reptile collection at Sparsholt is primarily devoted to education, many of our reptiles are used for lectures and presentations. Given the docile nature of the Hog Island boas, we regularly use them for such events, and they always respond well. This allows our older students the opportunity to practice their skills in handling a large snake of roughly 6 feet in length before they go on to conquer more larger, advanced species, such as anacondas, etc.

The Hog Island boa is a docile and unique type of snake that was once believed to have become extinct in the wild. With the Cayos Cochinos populations now looking healthier, the future looks more promising for this snake. With its bright coloration and docile nature, the Hog Island boa can make an excellent pet, and while it may not be commonly found in pet shops, captive breeding does take place, and these snakes can thrive in a captive environment. Always be sure you’re purchasing captive-bred animals, so future surveys of Hog Island boas continue to show an upward trend!

Emma Lawlor is an animal technician at Sparsholt College’s Animal Management Centre, with over ten years of experience in herptile husbandry. She is particularly interested in exotic invertebrates, including praying mantids.
James Brereton, MSc, is a lecturer in Zoo Biology at University Centre Sparsholt in Hampshire, England. Previously, James developed his experience with reptiles and amphibians through work at ZSL London Zoo and Beale Wildlife Park. He may be contacted at James.Brereton@sparsholt.ac.uk.