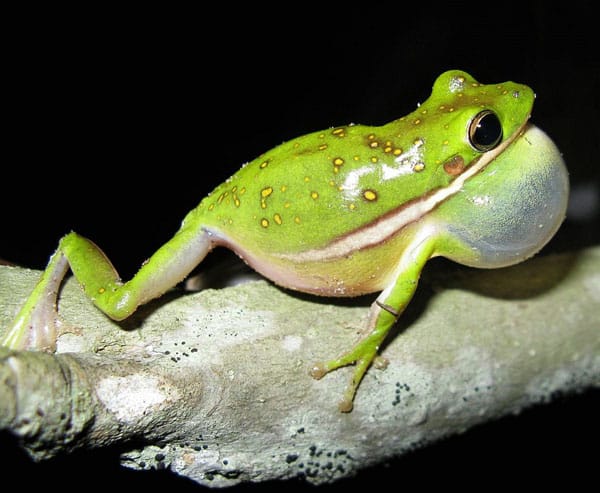 Green Treefrog (Hyla cinerea) The green treefrog is common throughout the southeast United States, and their presence is best known by their ca

The green treefrog is common throughout the southeast United States, and their presence is best known by their call, which can be heard from nearly a mile away on a still night. Their breeding season is quite extensive, and in Florida I have seen them breeding from April until October. They prefer more permanent water than some of the other treefrogs, and will even breed in water that contains fish.

Often they will call during a falling barometer, such as before a rain. Like most treefrogs breeding takes place at night, but intermittent choruses can be heard in the daytime, especially in the late afternoon, and during the actual breeding they will call continuously deep into the night, often in the company of other species of frogs and toads.

The green treefrog is relatively inexpensive to buy. Also if you live in their range they are easy to locate by their singing, and a couple can easily be collected. Please check the local regulations for the area you might be collecting in since they may be protected in some regions, especially in fringe areas of their range. If you do wild-collect, and you have many to choose from, please feel free to look them over first, since some have lovely yellow or orange spots, and some may be larger or greener than others. 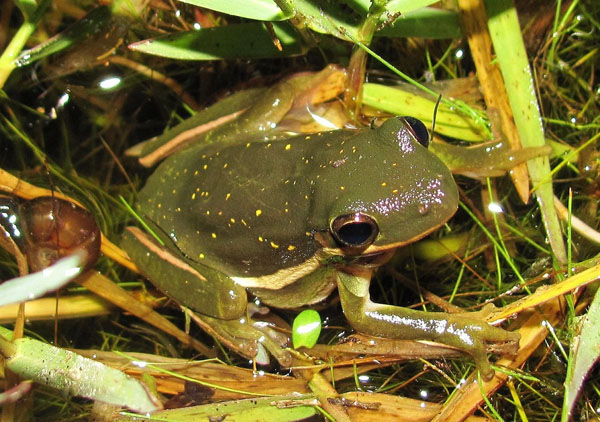 Besides worms and crickets, moths are a favorite, and despite the small size of the frog, it can eat a pretty big moth.

Also be aware of their possible croaking – which could occur at any hour of the day or night in captivity, especially ahead of stormy weather. If you live in their range you can always be on the lookout for females (since they're silent), but if females are taken during the breeding season, or if you find a pair, it's better to collect them both, or add a couple males to the mix, so she'll be able to lay her eggs. The males as well as her tadpoles can always be released later, and you'll have a nice "silent" female or two! We'll take a look at the care and hatching of the eggs shortly. Also if you buy a female from a list or a store, more than likely she'll have no eggs, and the artificial light of captivity will prevent her from producing any.

The average length of green tree frog (Hyla cinerea) is about two inches from snout to anus, but from personal experience these will reach about three inches in captivity. I have never seen them this large in the wild. The tadpole length is about two inches as well. They usually lay several hundred eggs, and these are attached to sticks, leaves, or other debris on the bottom. In captivity they're attached to plants, aquarium gravel, or to the aquarium itself. They hatch in less than a week and like most tadpoles, they remain with the eggs for several days. 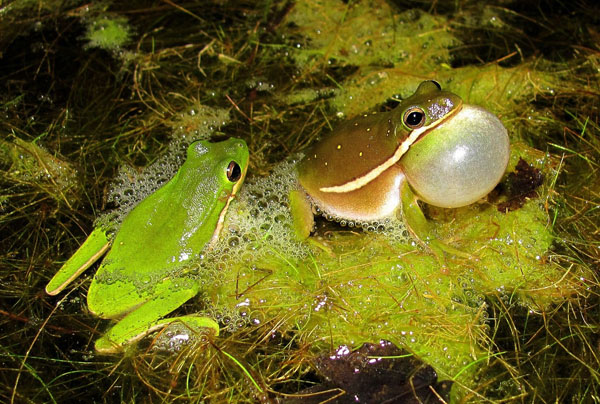 The green treefrog is a great frog for the beginner and pro alike, and they will give you five or six years of fun and trouble-free care.

Of the species I have kept over the years, this is one of the most colorful, and one of the easiest to keep! When compared to other treefrogs, these feed very well, and will react very quickly to food. They will turn to snatch an insect the moment it is dropped in with them, and aren't too picky as to the type of setup you decide to go with. We all like free food. Right? Here's a way to feed them for free – in the summertime at least. Collect insects from your porch light, or you can flip a few boards for a couple crickets. Most pet stores offer crickets for sale, so feeding is inexpensive at best, and some can be trained to eat small worms.

Besides worms and crickets, moths are a favorite, and despite the small size of the frog, it can eat a pretty big moth. They'll also eat beetles, pillbugs, sowbugs, small spiders, even tiny frogs, in addition to other similar-size foods. Pretty much if they can fit it into their mouth, they'll eat it. From personal experience, when I have mixed these with other treefrogs, the green  treefrogs will usually get to the food first. Concerning their temperature, they like it anywhere between 70-82 degrees, and these do well with a reflector over them with a 60-watt bulb. Besides the heat they seem to readily enjoy, it makes it easy to see them, and they are pretty to look at.

For housing, a 10 gallon aquarium makes a great "home," and one aquarium will comfortably hold up to four frogs, but two or three are better, since some may be faster than the other at snatching the food. I have used several different setups for these, but the one that seems to work best for these is large, natural "creek gravel" (available in many pet shops and garden stores), and large gravel is less likely to be swallowed during a feeding frenzy! Anyway on top of the gravel I place a shallow bowl of water for them to hop into. Stoneware bowls seen in the pet shops look better than the standard round bowls, and there are even decorative bowls designed to fit into a corner of your aquarium. A few plastic plants are nice to have, but to overdo any aquarium decor may hide some of their food. A nice piece of driftwood also works well, and I often use this in place of plastic plants. 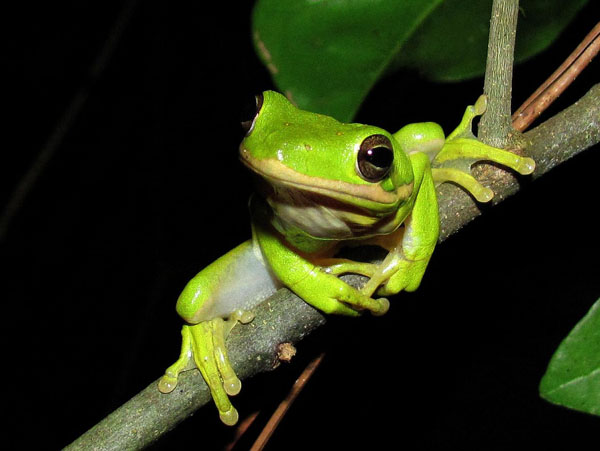 The green treefrog is common throughout the southeast United States, and their presence is best known by their call.

When Fall arrives, they can be kept feeding right through the winter by keeping them under a heat lamp, but if you prefer (especially if you live in area where insects are scarce during cold weather), you can hibernate them. To do this, rather than make a mess of their home aquarium, I have a separate aquarium and I fill it about half-full with dead leaves taken from the forest floor and add the frogs. Keep this moist but not too wet, and when it's cool enough they'll hide beneath the leaves. If the leaves are moist enough a water bowl may not be needed, but from experience I put a bowl in there for them anyway, since I do see them using it from time to time. Several months is usually good enough, and around April I return them to the light and warmer temperatures and after a week or so, they'll resume their feeding. As for hibernation, I usually keep them in the mid-40s and 50s, but they must not be exposed to freezing temperatures. If it is in the 60s for any length of time they may want to become active.

I have never bred these, but have raised the tadpoles, which are similar to other tadpoles. They are easily trained to eat fish food and Repto-Min, as well as soft lettuce. The tadpoles grow to around two inches and once the back legs are full-sized, the body will begin to turn green, and the froglets will eat fruit flies or baby crickets. It takes about two months for the tadpoles to transform. The frogs reach maturity in about one year.

This is a great frog for the beginner and pro alike, and they will give you five or six years of fun and trouble-free care.

"Nature" Joe (Myers) has been working with groups of people of all ages in an outdoor educational setting since 1986, and can be followed on Facebook, and his nature photography is displayed there publicly. https://www.facebook.com/n.joe.myers