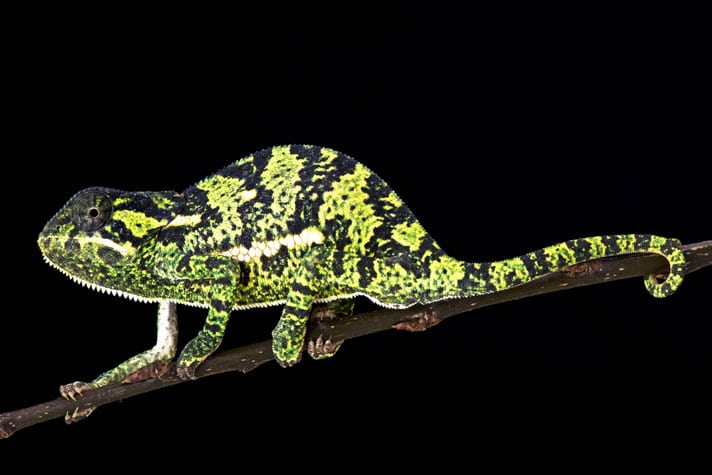 Flap-Neck Chameleon (Chamaeleo Dilepis) Distribution Widely distributed in Tropical and Southern Africa. In some parts of its range, such as Botswan

Widely distributed in Tropical and Southern Africa. In some parts of its range, such as Botswana, it is the only endemic chameleon species. In many regions its distribution is becoming restricted due to commercial farming and mining activities.

Wide ranging though variable habitat including, coastal thickets, woodland, moist and dry savannah. It is not a species found in the high canopies of trees.

Chamaeleo dilepis is possibly one of the widely available chameleon species in the pet trade. Although captive bred individuals are available, most are wild caught and are exported from various African regions (not Botswana as they prohibit the export of all wildlife – invertebrate or vertebrate) in their thousands. Most individuals can be acquired from pet stores, trade shows, internet and breeders. Expect to pay around $50-$60.

The Flap-neck is a good beginners species, and at 25-30cm is an easily manageable size.

A 1m x 1m x 1m cage will be suitable for a pair or trio of individuals. Furnish the cage with lizard habitat products such as appropriately sized branches and robust hardy plants. The flooring, if using living plans, should compose of a peat/sand mix which will give the plants rooting ability. Plenty of cover is important so as to allow individuals to ‘hide’ from one another. Vents in the cage will allow fresh air to circulate through it. The top of the cage should be mesh, as this will allow lighting and heating to be suspended from the outside. Branches should be a sufficient distance from the mesh to prevent the chameleons from climbing on it and potentially burning themselves beneath the heat source.

An ideal daytime temperature would be between 25oC and 32oC, with a basking area of 35oC. At night, the temperature should drop to 18-22oC. Provide full spectrum lighting for 12-14 hours a day. Relative humidity should be in the region of 50 – 60%. Use a reptile thermometer and reptile hygrometer to monitor these conditions!

Provide a varied diet of live reptile food that is commercially available along with locally caught wild insects. These should be gut loaded with calcium and sprinkled with a good vitamin/mineral supplement prior to being fed. Feed a few insects every day. If underfed, flap-necks will quickly deteriorate and become very lethargic. I have never encountered problems with over-feeding, as if the individual is not hungry, it simply will not feed. Care should be taken to ensure all uneaten food is removed from the cage, as chameleons become very agitated if subjected to insects crawling over them all the time.

As with all chameleons, flap-necks will not drink from static water sources. For this reason, the cage should be sprayed once a day. Care should be taken to avoid creating pools of stagnant water which can lead to the onset of fungal growth and be detrimental to the chameleons health. The installation of a dropper system which collects in a pool and is then pumped to a header tank and re-circulated will be beneficial. When misting the cage, gently spray each chameleon so as to ensure that it is drinking. You can do this with an Exo Terra Reptile Mister. Continue spraying until the individual stops drinking. Dehydration is one of the biggest killers of chameleons.

Through many areas of its distribution, the rainy season extends from December to March. During this period, a heavier misting should take place, as following the cessation of the rains comes the breeding season, and it is likely that a heavier misting will bring both sexes into breeding condition. A drop in temperature is not normally required.

Captive breeding is possible, though is not always guaranteed. As a stimuli, as mentioned above, a heavier spraying should take place between December and march. Also, removing the male for this interval and then reintroducing him to the female may make her more receptive.

A gravid female can usually be identified by the abnormally ‘lumpy’ appearance of her abdomen. When she is ready to lay, she will descend from the branches, dig a hole in the ground into which she will deposit between twenty and forty pure white eggs each measuring 1-1.5cm in length. Incubated artificially in damp peat or vermiculite at 28oC, the eggs will hatch in around 300 days.