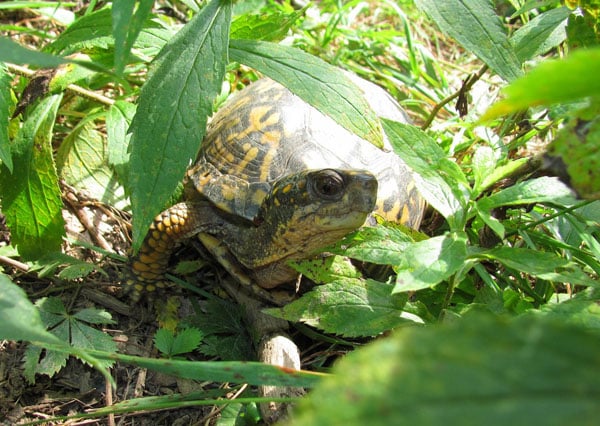 The Eastern box turtle (Terrapene carolina carolina) has a rather complex annual cycle, which will put it into different areas at different times of t

5 Great Costa Rican Herping Destinations
Dreams of Loam: In Search Of The Eastern Spadefoot Toad
Herp Queries: Pros And Cons Of ATV Use When Field Herping

The Eastern box turtle (Terrapene carolina carolina) has a rather complex annual cycle, which will put it into different areas at different times of the year. This species has a fairly large range over the eastern United States, and are most seen in wooded areas, but they can occur in other places too, but even then a wooded area is usually not too far away since they usually hibernate there. They can also be seen in old fields with a lot of goldenrod and other herbaceous vegetation, as well as wild strawberries, blackberries, raspberries, and perhaps a few small trees scattered about.

Sadly they often enter hayfields with deadly results if they happen to be there during the harvest. Maybe if those who cut hay could set their blades around seven inches above the ground, this would spare many. They enter the hayfields for food, since grasshoppers, katydids, and slugs are common there, as well as cutworms – which are some of their favorites. Often in the forest, food may be lacking, and this why they come to the more open areas, taking shelter from the hot sun in a dense stand of goldenrod or milkweed. In September a favorite place for them is under an old apple tree once the fruit begins to fall.

The Eastern box turtle (Terrapene carolina carolina) has a rather complex annual cycle, which will put into different areas at different times of year.

During really hot weather they often enter the woods – or at least the edge of it. It is here they will encounter wet areas such as shallow water-filled tractor tracks and ditches, and these will often attract large numbers of them during really hot weather, and in some cases the turtles will be so covered with mud that only their eyes will be visible.

A thunderstorm will send them back into the fields, or along the woods-edge for whatever is ripe there. They always seem to know what's ripe, and exactly where to find it, and in the summer months behave very much like the wood turtle (Clemmys insculpta), but are less often drawn to water. Box turtles often live in areas where the only water they may see is what may land in a cupped leaf during a storm! They seem to thrive in areas with no water visible, depending upon summer rains to bring water to them, but will freely drink whenever water is encountered. Sometimes in hot, dry weather, a dozen or more can be seen around the reedy edges of a farm pond in or bordering a woods, but are quick to leave once the rains come.

Mild cloudy weather will keep them active all day, and during sunny weather they are active nearly every morning until the heat becomes too uncomfortable for them. At this time, rather than heading toward water, they often take refuge in the shade of plants or trees, sometimes partially dug into dead leaves or loose soil, or under a clump of fallen reeds or grass.

The adult males are very territorial most of the year (or at least during their "active" time of year, when they are not hibernating), and when I lived in Ohio and southern Indiana, there was only one adult male on each wooded ridge, and I'm sure this goes for other areas also, but he would always patrol his hilltop looking for others. Females were almost always bred, while males would be challenged, and the fights were sometimes brutal, with a lot of biting going on. The loser would spend much of the day closed tight in his shell while the dominant male would bite at his shell until darkness of night took over. In the morning the loser would leave the ridge, having learned his lesson, and this may explain why younger males are seen more in the lower areas of the forest. 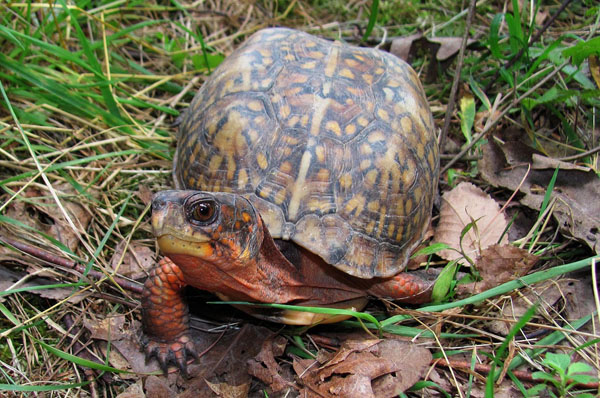 Mild cloudy weather will keep Eastern box turtles active all day, and during sunny weather they are active nearly every morning until the heat becomes too uncomfortable for them.

Right before hibernation things become interesting for them, as they suddenly get the urge to migrate back to their areas of hibernation, which are often re-used every year, be it an old leaf-lined stump hole where the tree rotted away long ago leaving only a shallow depression, or a similar small low spot along an old easily-recognizable fence row. In some instances a dozen or more can be seen sharing one "hole" – each burrowed into the soil, usually facing away from each other, with a small mound of soil near the middle, dug out and mounded up by the turtles themselves. In areas where the soil is softer they often just dig in, but always using a small area here also after migrating to it, with several to many turtles gathered in one area.

By late October all the turtles have left the open areas and fields, and are ready to hibernate often near a wind-protected ridgetop where oak and hickory are abundant, and from my personal experience, White oak (Quercus alba) and Shagbark hickory (Carya ovata) ridges are preferred, and usually just over the ridgetop on the South-facing slope for hibernation, and even after digging in they may still emerge during warm afternoons. By November they are usually in to stay, with their areas of hibernation being nearly covered by the fallen leaves. 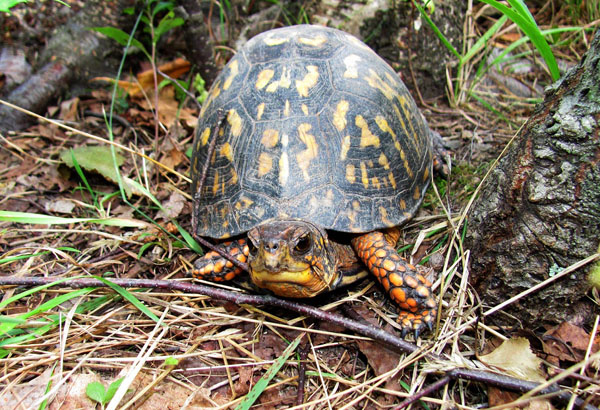 These amazing animals sometimes turn up near people, especially in subdivisions where forest has been destroyed, and sadly there's little we can do for them once this happens.

By mid-April they usually start to emerge after the temperatures rise into the 70s, and at this time the empty dugouts are clearly visible, and they usually remain near the area of hibernation for a week or so, often with their shells caked with dried-on mud. Once it rains heavily, they will drink and begin their spring migration to their summertime dwellings. Also at this time mating often happens, and the females often stay near the edge of the woods near their nesting areas, which can be an open sunny area near a hilltop, or the open slope of a field.

One thing they look for before nesting is the lack of tall vegetation and an area of good drainage, and usually on some sort of a slope where the rainwater drains off quickly.Unlike the wood turtle, which often nests in the bare open, the Eastern box turtle nests in slightly more-sheltered places, such as beside a dead branch or a plant. 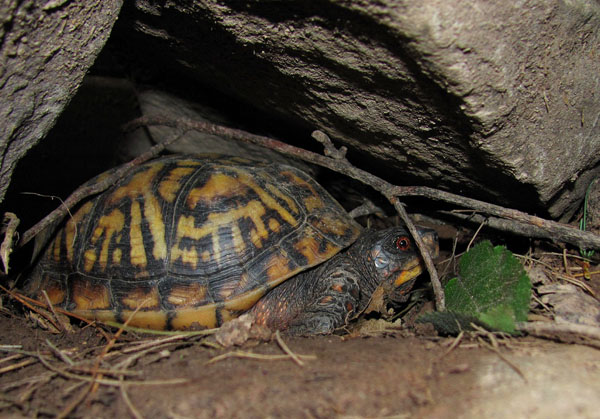 Unlike the wood turtle, which often nests in the bare open, the Eastern box turtle nests in slightly more-sheltered places, such as beside a dead branch or a plant.

Often several nesting females can be found in one area, and after nesting the females usually spend the summer in the field or will wander into a grassy wet meadow, while many of the males remain near the edge of the woods, if not deep into it guarding their territories. A prime male "territory" is a vegetated open area of an otherwise wooded ridge, and there he'll often be seen in or near an area of branches of a fallen tree, where he will immediately check on any other box turtle that passes within his sight. During some years he may not see another turtle until it's time for their pre-hibernation migration, when he may encounter many. Mating occurs then as well as springtime, often in the same areas, and they will attempt to breed whenever an adult pair happens to meet during their wanderings.

These amazing animals sometimes turn up near people, especially in subdivisions where forest has been destroyed, and sadly there's little we can do for them once this happens. Even in rural areas the Eastern box turtle can be found in gardens and other places of freshly-disturbed areas such as a tilled garden or plowed field, as they search for insects and slugs, and they are good control for snails, slugs, and cutworms, and if you keep your tomatoes and cucumbers above the ground, you should have little trouble from them. 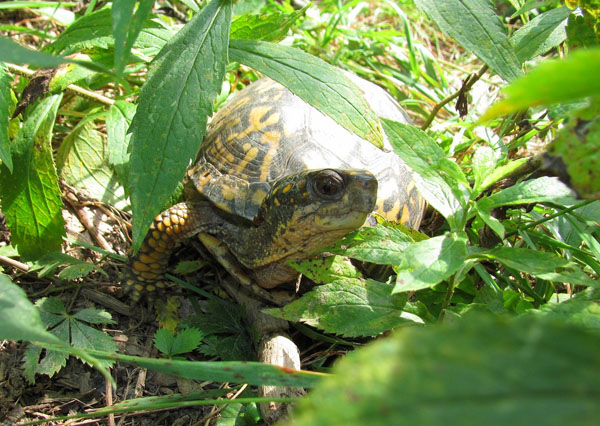 A prime male "territory" is a vegetated open area of an otherwise wooded ridge.

As property owners allow old fields to overgrow they are really helping Box turtles, and other wildlife too, and an old field with small trees and wild berries will often harbor many, and will add cover for many species of animals as well, and this will keep them from wandering into urban areas and roads, thus keeping them safe for future generations to enjoy.