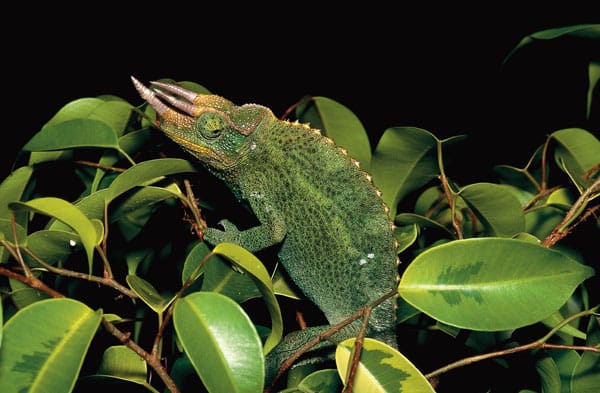 These fascinating mini dinosaurs are a great choice for the hobbyist willing to put the time and effort into their care.

Jackson’s chameleons (Chamaeleo jacksonii ssp.) currently are one of the most readily available chameleons in the pet trade. They often remind people of triceratops, three-horned dinosaurs that lived millions of years ago. This chameleon’s native range is in Africa, but wild populations also exist on the Hawaiian Islands. In 1981, exportation from Kenya was banned, but exports still do come from the Hawaiian Islands. These fascinating mini dinosaurs are a great choice for the hobbyist willing to put the time and effort into their care.

Create a Habitat for your Chameleon

As with all chameleon species, house Jackson’s chameleons separately in screen cages measuring at least 3 feet tall, 2 feet long and 2 feet wide. If adult chameleons see their reflection or another chameleon in the room, they could perceive this as a threat. Without the ability to escape, they become stressed. Constant stress of this nature can be detrimental to any chameleon. Housing animals separately is one way to reduce the stress of captivity. Removing the chameleon for watering, cage maintenance or holding are short-term, occasional stressors that are not as harmful as improper husbandry. 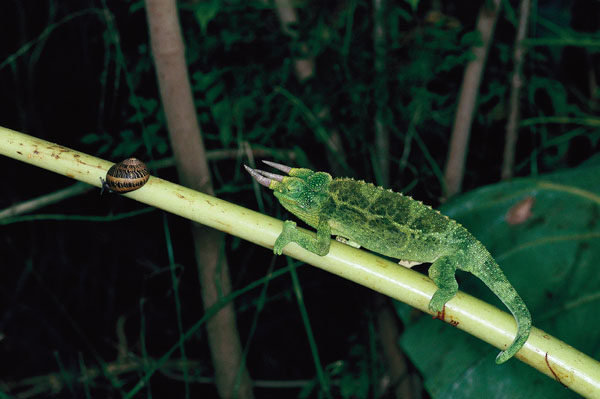 An enclosure should include a large tree with ample climbing and hiding spaces, so the chameleon can hide and feel secure.

Neonates can be housed singly, or they can be housed in groups for a month and then separated into smaller groups as long as aggression or competition for food is not an issue.

An enclosure should include a large tree with ample climbing and hiding spaces, so the chameleon can hide and feel secure. I use Ficus benjamina trees with sticks of various sizes. Any plants or bushes nontoxic if eaten are suitable, as well. Many chameleons have been housed with plastic plants with no apparent problems, but some might occasionally chew on or accidentally ingest leaves, so they need to be monitored. I prefer paper towels or nothing at all as ground cover.

Clean the chameleon’s enclosure at least three times per week. Once a month, remove the chameleon and plant to give the enclosure a thorough cleaning using a reptile-safe disinfectant.

Keeping a Jackson’s chameleon fully hydrated is important. Rainfall averages 30 to 60 inches per year in Kenya and Tanzania. Even when no measurable rainfall is present, daily moisture is still available from high humidity. Humidity droplets are all the chameleons have for a water source at times.

Proper hydration also plays an important roll in shedding. If a shedding chameleon is not properly hydrated, a skin tourniquet might form on toes and joints. This can result in loss of the digit or foot. 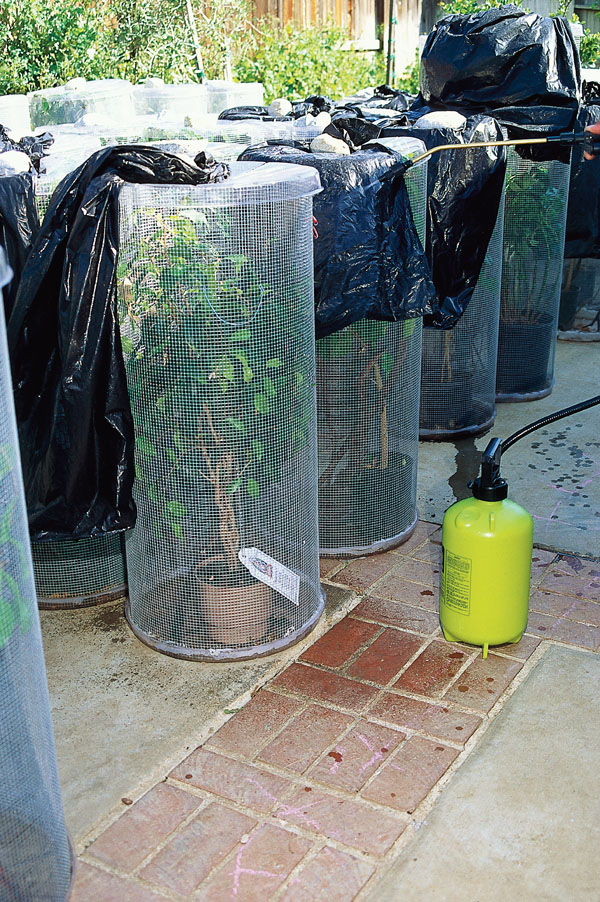 Gently mist the chameleon’s entire tree and body with water a minimum of twice daily. Use a cool-mist ultrasonic humidifier if humidity drops lower than 50 percent. Even if you supply a humidifier, your chameleons would benefit from an artificial rainstorm in your shower once a week. Position the chameleon on a plant or clothes-drying rack under a light rain, or mist for a half-hour minimum weekly.

When I studied Jackson’s chameleons in Hawaii, it rained daily. If the rain was slow to start, the chameleons seemed undisturbed, but if rainfall came on fast, quite a few chameleons jumped off their branches, landed with a thud and scampered for cover. This sudden shock can be stressful and result in injury to a captive chameleon. To avoid a sudden shock, allow chameleons to walk onto the plant or clothes-drying rack on the side devoid of artificial rain

Three subspecies go by the common name “Jackson’s chameleon.” All are native to Africa.

Also take note if your chameleon repeatedly rubs its eyes on branches. This could be the first stage of an eye infection, or it is simply trying to clean dirt out of it. When the chameleon is in an artificial rainstorm, it has an opportunity to clean its eyes. If eyes do become infected, contact your veterinarian for antibiotics.

Jackson’s chameleons in Hawaii seemed to adapt well to many different environments. Temperature and humidity variables are unlike their original habitat in Africa. From backyards to macadamia nut orchards, these chameleons were in arid areas as well as cooler rain forest areas. My chameleons also experienced a degree of temperature fluctuation in my greenhouse in California. Temperatures often rose above 100 degrees Fahrenheit in the summer, and they dropped below 40 degrees in the winter. My breeding stock showed no apparent adverse effects to this fluctuation. I kept humidity between 70 and 100 percent and provided shade in the summer months, and I offered full sun for basking in the winter months. 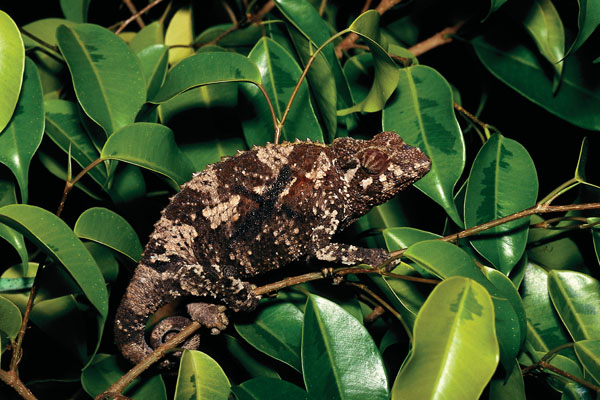 Jackson’s chameleons are one of the most readily available chameleons in the marketplace today.

Exposure to natural sunlight cannot be overstated, especially in a live-bearing species such as Jackson’s chameleons. The survival rate of my adult and newborn chameleons rose dramatically when I started offering more direct, unfiltered sunlight. Even if your chameleons are housed indoors most of the time, temporary outdoor enclosures are a good idea. Never leave a chameleon unattended if it is unconfined and outside.
On top of an indoor enclosure I place an UVB-emitting fluorescent tube and a hotspot lamp. Remember that no light bulb is as complete as natural sunlight.

When purchasing a new Jackson’s chameleon, go through this checklist to assess your new captive’s health.

Take care that the chameleon doesn’t come into direct contact with any artificial heat source. A branch three to four inches from the basking site ensures the chameleon won’t get burned. Make sure chameleons cannot get close to any lighting if they are hanging on the screen.

Captive chameleons eat crickets, flies, cockroaches and snails. The length of insects should be shorter than the gap between the chameleon’s eyes.

Allow neonates and juveniles free access to food for three to six months. Offer an average of five to seven insects per feeding to your subadult to adult chameleons. Adults might eat every other day at times or even go off food for a longer period during cooler months. Fully hydrating chameleons is essential at these times.

I prefer free-range feeding, which allows a chameleon to hunt for its food and to exercise. However, a plastic feeding dish placed under a branch for easy access is fine.

Be careful how you use supplements with Jackson’s chameleons. They are especially sensitive to excess amounts of synthetic vitamin A. Vitamins given improperly might cause too little or too much of the vitamins to be ingested. Too little creates vitamin deficiencies. Too much spurs vitamin toxicity, which can lead to gout, edema or even death.

Beta-carotene is often the source of vitamin A in supplements. A powerful antioxidant, it improves immune function and promotes mucous membrane health. This helps reduce upper respiratory infections, to which chameleons are prone. In fact, dietary intake of beta-carotene can enhance cell-mediated immune responses.

Dusting with dry vitamins is questionable because beta-carotene and other ingredients essential for chameleons do not work well in a dust form. The fat lipid beadlet needed to keep beta-carotene stable when exposed to oxygen is far too large to stick to any feeder insect.
Gut loading feeder insects is the best way to transfer vitamins to your chameleons. It ensures the insects are rich in vitamins and free from toxins.

I gut load my feeder insects with Sticky Tongue Farms Vit-All to provide vitamins and amino acids, and then I dust feeders with Sticky Tongue Farms Miner-All to provide calcium and trace elements. I use the indoor formula for chameleons kept indoors and the outdoor formula for chameleons exposed to natural, unblocked sunshine for more than 12 hours throughout the week.

Jackson’s chameleons are one of the most readily available chameleons in the marketplace today. They can be found in pet stores, at expos and on the Internet. I prefer to see a chameleon before I purchase it (so I can complete a health check), but Internet purchases can be safe and rewarding experiences with reputable dealers.

These fascinating, gentle mini dinosaurs are a great choice for lizardkeepers with the time and proper commitment. If you are one such keeper, perhaps you, too, will own a triceratops in a tree someday.

LINDA J. DAVISON owns Sticky Tongue Farms, specializing in the care and breeding of 22 herp species, including 14 species of chameleons, since 1993. She is the author of Chameleons: Their Care and Breeding and numerous articles for REPTILES magazine. For more information, visit her at stickytonguefarms.com.