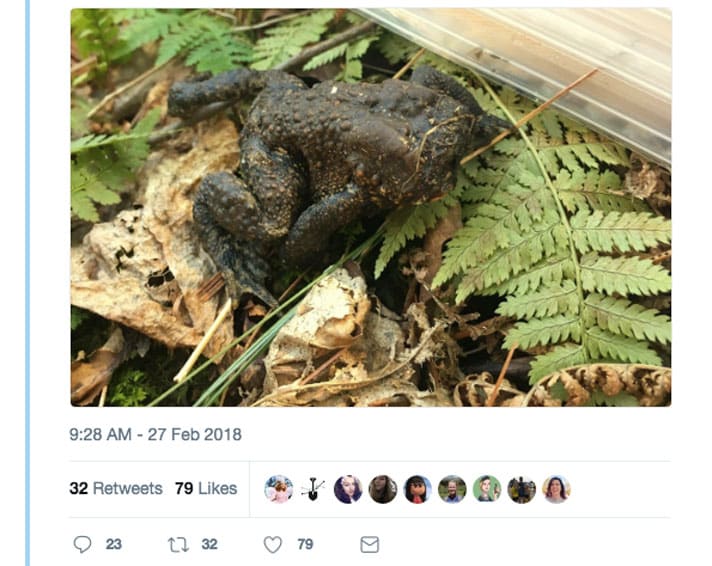 Herpetologist Jill Fleming is unsure what happened to the face of this toad she happened upon back in 2016. She Tweeted the photo February 28 asking for opinions. What do you think?

Herpetologist Jill Fleming (@salamander_jill) was researching the red spotted newts in a Connecticut forest back in April 2016 when she happened upon a toad that lacked a face. 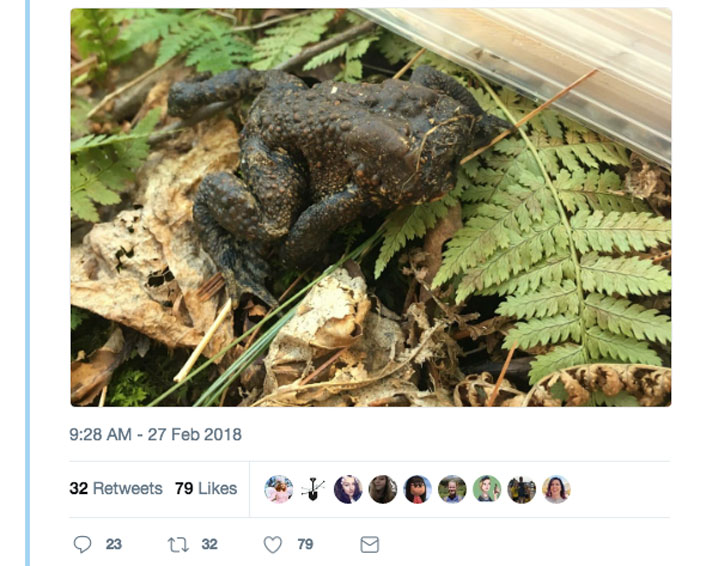 Herpetologist Jill Fleming is unsure what happened to the face of this toad she happened upon back in 2016. She Tweeted the photo February 28 asking for opinions. What do you think?

The American toad (Anaxyrus americanus) had a normal body except it lacked eyes, nose, jaws, and a tongue. Its face had been replaced by smooth skin, akin to what would remain if its face was sheared off, which appears to be the case. It did have a small hole where its mouth used to be, Fleming noted.

Toads of the United States

Fleming tweeted video of the hapless amphibian walking around semi-aimlessly, asking herpetologists on Twitter what their thoughts were on the toad without a face.

Fleming believes the amphibian had recently came out of brumation with its face sheared off. She tweeted that the toad’s predicament was not the result of genetic mutation, as it was missing all the critical parts for feeding, and wouldn’t have made it from the toadlet stage without the capability to hunt for its food.

One responder suggested the toad went into brumation injured and came out healed, perhaps the victim of the flesh-eating toad fly larvae, which can cause massive damage to a toad’s face 2 to 3 days after the toad fly larvae have hatched.

Fleming also suggested that the toad may have had its face eaten off by a predator during brumation, while another herpetologist, Nick Caruso, suggested that it can only be a Demogorgon of “Stranger Things” fame.

it can only be one thing pic.twitter.com/Isq6Q5B1vz

At any rate, the poor toad most likely perished given it couldn’t eat in the condition it was in.