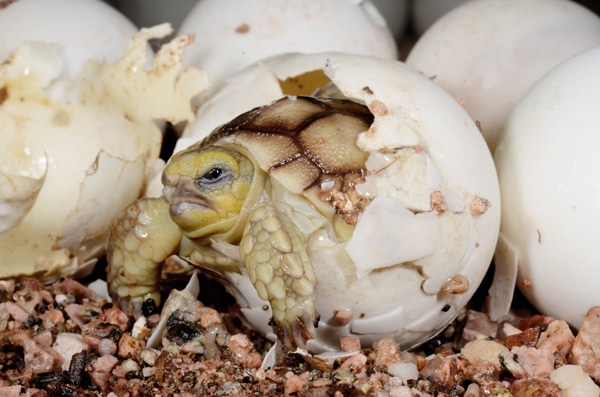 What exactly is TSD?

Question: A friend of mine visited a turtle farm in China recently, and the farm’s owner said he and many of his turtle-farming countrymen have been buying large numbers of captive-bred turtles from America over the past few years. He told my friend that most of the oldest turtles that are now reaching maturity are turning out to be males. This causes him to wonder if U.S. breeders are trying to hatch out males on purpose, in order to ultimately help prevent competition from other turtle breeding facilities. He said they use something called “TSD,” which he believes is a hormone or drug that can be used in order to do so.

Is this some kind of trade secret? A baby sulcata tortoise my friend bought five years ago is looking like a male now. This may be coincidence, but it makes me curious if there’s some reasoning behind what the Chinese turtle farmer was talking about. 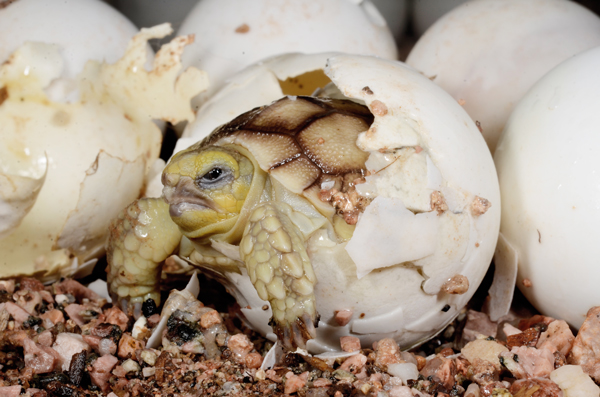 A new baby African spurred tortoise (Stigmochelys sulcata) emerges from its egg.  Odds are that it will be a male, for a variety of reasons.

Answer:   There is some truth behind the Chinese farmer’s suspicions. The acronym “TSD” stands for “temperature-dependent sex determination.” It’s not a drug or hormone. Simply put, the temperature at which the eggs of some animals are incubated determines what sex the neonates will be. Many, if not most, kinds of chelonians are TSD species.

For a long time it was understood that simply incubating eggs at a temperature above or below a certain threshold would produce the desired sexes. Males typically occur when eggs are incubated at lower temps of the desired range; females at higher. There are notable exceptions in which the reverse is true, but most turtles and tortoises follow this pattern, and if temperatures in the middle range are used, a mixture of sexes is more likely. It gets more complicated, too, as new research is uncovering additional details regarding TSD. For instance, there is a period during incubation when sex is determined that is the critical time that the temps make a difference.

Many breeders use homemade or other incubation techniques that are not extremely accurate. Because it’s more dangerous to expose a clutch to too much heat than by using lower temps, many breeders choose to err on the side of caution and use incubation temps at the lower end of the proven range. And this tends to produce mostly males.

Another factor regarding the incubation of turtle eggs is that when they are incubated at higher temperatures, there can be an increased chance that problems such as spinal deformities and scute irregularities may occur among the hatchlings. Many customers, especially in Asia, demand perfectly symmetrical dorsal scutes on the turtles they purchase, and if a breeder’s goal is to hatch large numbers of healthy offspring, it’s easy to see how a preponderance of male turtles would also result. Perhaps coincidentally, this would also slow the rate of today’s customers becoming tomorrow’s competitors.