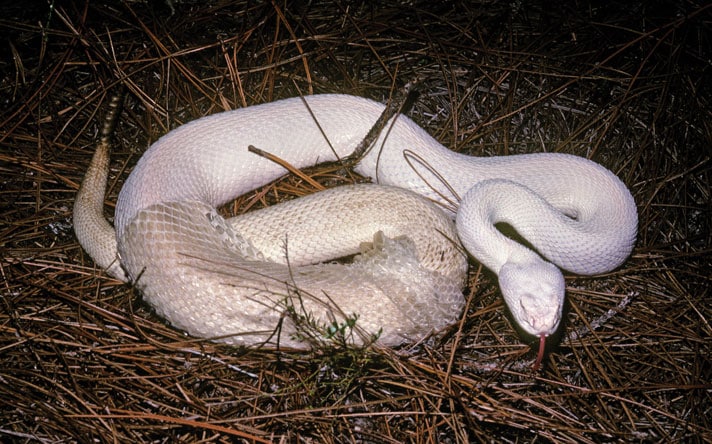 Herp Queries: Do Snakes Get Dirty?

Snakes definitely do get dirty, as evidenced by this leucistic eastern diamondback rattlesnake (Crotalus adamanteus) shedding its old, soiled skin

What Is The Other Blue Dart Frog?
Can A Retic With Inclusion Body Disease Still Strike?
What Grammar Mistakes Do Folks Make When Writing About Herps?

Question: My mother thinks snakes never get dirty because dirt can’t stick to their shiny skin, and if they do crawl through mud, they just shed their skins to get rid of it. I read snakes molt as they grow, and their old skins lose their elasticity so they need to constantly replace them with new, stretchier skin. What do you say — do snakes get dirty?
Jared Hollingsworth, Jenkintown, Penn. 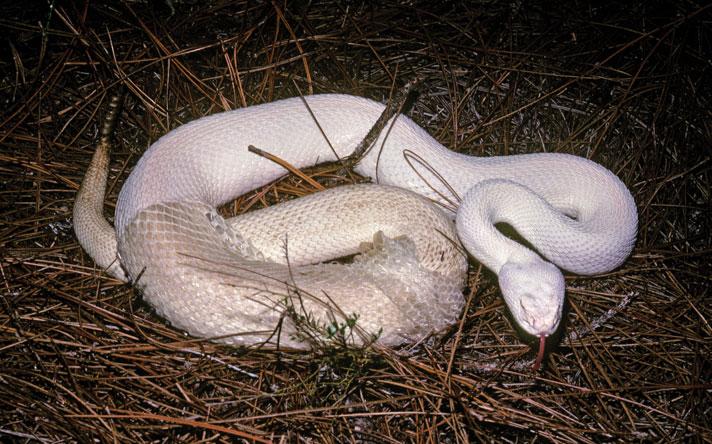 Snakes definitely do get dirty, as evidenced by this leucistic eastern diamondback rattlesnake (Crotalus adamanteus) shedding its old, soiled skin.

Answer: I wonder if maybe your mother sometimes wishes you could shed your skin, Jared. I know my mother did when I’d come home from my boyhood woods and ponds looking like a drowned rat.

Snake scales may deflect a hefty portion of the natural crud that sticks to pants legs, clings to socks, and adheres to shoes, but they’re not totally impervious. Moist substances, such as mud, feces, blood, etc., stick to snakes, though often in a thin layer that merely obscures their color and pattern. They’re good at not crawling through really messy stuff most of the time and seldom appear covered in filth.

Rough-scaled, semi-aquatic snakes, such as North American water snakes (Nerodia spp.) and water moccasins (Agkistrodon piscivorus), are the dirtiest snakes I’ve encountered. Along with the natural muting of colors and patterns that comes with age in most species, a build-up of dirt is why large adults often appear dull and unicolor.

Replacing old skin is primarily a factor of growth, as you noted. Damage to skin from injuries, abrasions, etc., can also hasten shedding frequency. Overall, it occurs anywhere from once to several times annually in most snakes. Naturally, young, rapidly growing snakes will shed more often than full-size adults.