Bonus content from the May 2010 REPTILES magazine article "Familiar Favorite."

To breed these snakes, I cool them in a similar manner as the rest of my colubrids – in a basement with natural light cycles and a temperature ranging from 50 to 65 degrees, depending on the temperature outside. In my situation, although stable and not prone to daytime highs and lows, on occasion the outside temperature can drop low enough for extended periods of time to cause the inside temperature to lower by as much as 5 degrees. For those who can control temperatures, I'd drop the temperature 10 degrees a week until the brumation temperature is reached. This will take about three to four weeks. 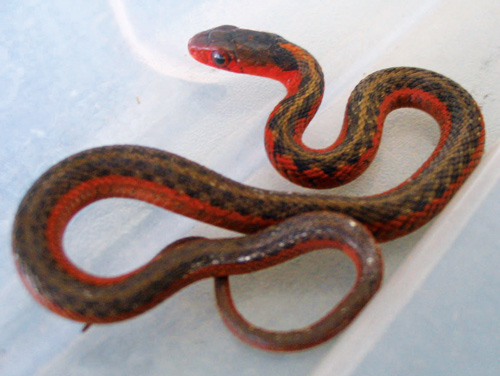 More morphs, like this "flame" phase, have appeared over the years and are now available on the market.

These live-bearing snakes are cooled from late November until mid-February. While the garters experience their winter slumber, I set up a new 29-gallon tank with natural substrate, live plants, rocks, logs, branches, a water basin, hiding areas and a basking light. The plan is for one pair snakes to live together in their new terrarium.

Upon coming out of cooling, the male almost immediately goes into jerky motions and purses the female. This is standard colubrid snake breeding behavior. Although most corn, king and milk snakes take a few weeks after coming out of cooling before the female ovulates and is receptive to breeding, eastern garters breed sooner. A few days after being warmed up, the snakes begin eating; however, the male’s appetite diminishes during the height of his breeding pursuits.

Their overhead light is on a timer and each morning the snakes position themselves under it when it comes on. After warming up, the snakes explore their cage or hide. Keepers should look for the male to actively court the female. This usually means him following her around and climbing on top of her. I have seen as many as three copulations in one week, and this is enough to insure a fertile breeding. Once the female is gravid, the male will lose interest. He can continue to be kept in the same cage and will not harm their offspring.

You can tell a female has become gravid when her skin stretches, spreading out her scales. A gravid female’s appetite will increase dramatically (I feed gravid females every other day) until a week or so before giving birth, when she’ll quit eating entirely. Females usually start eating again the day after having babies. It takes eight to12 weeks from successful mating to the birth of offspring. This timeframe depends on the temperature; warmer temperatures allow for quicker gestation.

The first time I bred these snakes, I was surprised at how early in the year my female gave birth. On April 25, I found 18 babies in the cage. The following year, kept under the same conditions, 22 babies were born on April 14.

Baby easterns usually start out by eating either guppies or small earthworms. I started mine on earthworms for the sake of convenience. It’s important to point out that “red worms,” sold as fish bait and sometimes found in the garden, are actually manure worms. Not only do garters find them distasteful, but they often regurgitate the manure worms they do eat and refuse to eat for several days afterward. These worms are easily identified by the light-colored rings that encircle their bodies; earthworms do not have these rings.

Young snakes are temporarily set up individually in 16-ounce, clear plastic containers to better monitor their food intake and behavior. Given that they were born in the summer and my house didn’t have air conditioning, no extra heat was supplied to the snakes. But for those of you that don’t have this kind of environment, provide an ambient temperature of 75 degrees. Although not possible to offer one in the 16-ounce temporary containers, once you move the snakes to a larger container you will need to offer a basking spot of 85 degrees by using a heating pad under one end of the enclosure. Other housing options would be plastic shoeboxes with tiny air holes or small plastic Kritter Keepers.

For substrate, I use paper towel, and I provide a water dish large enough to soak in. I’ve used baby food jars as well as plastic cups mealworms are often sold in. A small rock is used hold down the paper towel and also gives the snakes a place to hide under. I feed the babies earthworms every two to three days. Once a week I sprinkle multi-vitamin/calcium powder on the end of a worm.

After 6 months of age, the snakes can be moved into 5- or 10-gallon aquariums or Kritter Keepers of a similar size. At this time the snake will be about a foot long (some snakes grow faster than others). The young snakes graduate from eating earthworms to night crawlers that are cut in half. They eat half a night crawler every two to three days. I continue to use paper towel substrate and add a hide box and a branch to each snake’s enclosure. For the hide box, I use the plastic containers that frozen dinners are sold in. They measure 4 inches wide, 6 inches long and 1 inch tall. I cut a hole in the side of the container so that the snake may comfortably enter and exit the hide. At this point the snakes are big enough to feed half a store-bought night crawler every two to three days.

After reaching a year in age, snakes are moved to a 10-gallon tank. The heating pad is replaced with an overhead incandescent light. Food consists of an entire, full-sized night crawler every two to three days. I later convert them to feeding on scented, defrosted pinky mice by rubbing the defrosted pinky with a night crawler. Once they begin taking scented pinkies, they can often be converted to unscented pinks in just three feedings by placing less and less night crawler slime on the pinkies at each feeding. This varies from snake to snake, though. As they get larger, they move up to fuzzy mice and then regular mice. Adults are fed every five days. Most eastern garter snakes never get to a size big enough to eat adult mice, though adults readily take weaned mice. I always feed food items that are no larger than the same width as the diameter of the fattest part of the snake. I only serve one mouse per feeding. Once the snakes start eating mice, I no longer add vitamin and mineral supplements to their food.

Want to read the full story? Pick up the May 2010 issue of REPTILES, or subscribe to get 12 months of articles just like this.