When people think of boas, they often imagine huge snakes of the rain forest, green anacondas and their ilk, but not really suitable pets for the majority of reptile enthusiasts. Luckily, these serpents have a North American relative, which retains many of the typical boa characteristics, but in a much smaller, more manageable and undoubtedly charming package. 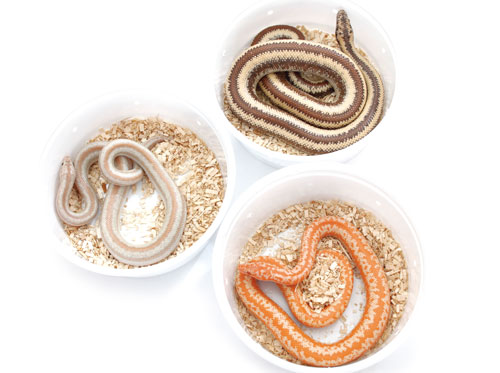 All rosy boas have three, distinct lines running down their bodies, usually orange, brown or black in color, interspersed with any shade of beige, yellow or gray.

Breeding is often said to be a relatively simple procedure, and this is true in comparison to many other snake species, but there are still a number of difficulties you may have to be overcome. Raising the newborns can sometimes be more difficult than a number of sources would have you believe. Always try to keep bloodlines pure by carefully selecting snakes from the same subspecies; any good breeder should be able to help you out here. There are lots of books and care sheets dealing with the captive upkeep of rosy boas, so we won't cover that in too much detail.

Being short and stout little snakes, they require only modest enclosures; a 20-gallon container is large enough for an adult. It should be well-ventilated, and floor space is more important than height, as these snakes like to burrow. The most aesthetically pleasing substrate is sand, but reptile-friendly wood shavings, or even newspaper, will suffice. Ensure a temperature gradient is created by installing a heating pad or heat lamp (or a combination of the two) on one side of the enclosure. The hot end should be 80 to 85 degrees Fahrenheit, while the cool end should be 10 to 15 degrees less. Always have a good thermostat so that these temperatures are regulated. Provide a number of hiding places. These are shy, burrowing snakes, so don't expect to see too much of them. Rosy boas do not thrive in any sort of humidity, and so to combat this, only provide a water bowl a few times a week, for 12 to 24 hours at a time.

Before breeding, a short winter cooling period, otherwise known as brumation, is necessary. During this time in the wild, the snakes will retreat to a dry, dark place, cease feeding and enter a generally dormant state. This is a winter survival tactic, but after warming up in the spring, the boas are then ready to reproduce. This is something we must aim to mimic in the captive environment.

Females reach sexual maturity at about 3 years old, or at least after their second winter. They should be closer to their full adult size at this point, which is around 2 feet long. Males may be ready much earlier, and they can breed from very young ages with no ill effects. Up until sexual maturity, it is not absolutely necessary for rosy boas to enter a period of brumation, but they certainly would do in the wild, so many keepers choose to as well. Indeed, many young snakes may actually require a brief winter cooling period before they begin to feed. 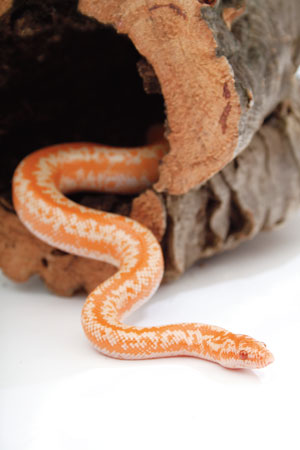 Hides should be offered at both the warm end of the enclosure and at the cool end.

Only healthy individuals should be considered for brumation, as they will use all of their fat reserves over the winter. After carefully selecting and checking the boas before their big cool, by around the beginning of November, stop feeding them. Leave them for two weeks so that they can fully digest and pass out of their system any remnants of their last meal.

It is common practice to move the snakes to temporary accommodation over the winter. If you usually keep more than one snake in a tank, I suggest brumating them separately. Either way, their enclosure should have clean substrate, a hide box (preferably one in the warm end and one in the cool end), and be kept fairly dark and absolutely dry for the duration of the period. Despite being in a dormant state, the snakes may move around a little, drink from time to time, and some individuals may even shed their skin. Offer water from a small container a few times a week. Don't leave water in the enclosure, however, as an accidental spillage combined with the low temperature, could lead to respiratory problems for brumating snakes.

It is now time to begin gradually dropping the temperature to around 55 to 65 degrees, perhaps over a period of about a week. Some keepers insist that only a slight drop in temperature from what the snakes are used to is necessary, but I've always had success in cooling them down to 55 degrees. If you can also gradually reduce the light at the same time, then do so. The enclosure need not be pitch-black, but it should be dark. That means no bright lights in the enclosure, which should be situated in a quiet, relatively dark room. As much as six to eight hours of sunlight through a window is no problem as long as it doesn't shine directly into the enclosure. 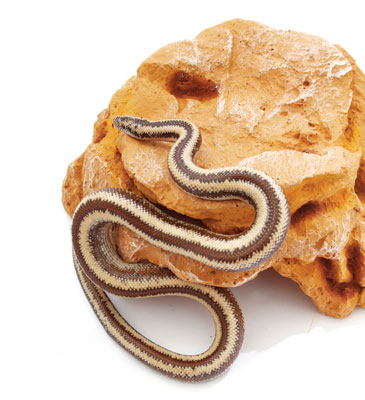 When the temperature is down, there is little else to do. Aside from offering a small amount of water every day or two (in a bowl too small to soak in), leave the snakes alone over the winter. Brumation length varies from keeper to keeper, but most would agree that anywhere between seven and 12 weeks is sufficient. I like to have the snakes begin brumation by about mid-November, so at the beginning of February, after 10 weeks of cooling, it's time to gradually increase the enclosure's temperature.

After about five days of the temperature being back to normal, offer the snakes their first meal of the year. Make sure the food item is smaller than what they are used to, as after such a long period of fasting, you don't want to risk regurgitation. After the first meal, the snakes should have a voracious appetite. Females, in particular, should be fed larger items every five days, but be careful not to overfeed. We want to ensure that they are in peak condition for the upcoming breeding season. Males often shed their skin about a month after resuming feeding, females a little later. But in both cases, this shed generally means that the snakes are ready to reproduce.

As long as the snakes are healthy and feeding well, it's time to introduce the female into the male's enclosure (or vice versa). Introduce them several times a week, for between 12 to 24 hours, and before too long, mating will take place. When exactly this will occur can vary and depends on subspecies, state of health, comfort in the surroundings and the individual snakes in question. All the keeper can do is provide ideal breeding conditions and hope that nature takes its course. Copulation is fairly easy to spot; the male will align himself with the female, rub his chin along her sides and back, and then entwine his tail with hers.

Anywhere between one to three months of this routine should result in a successful mating, but the only real way to be sure is to check the female's girth. Three to four weeks after copulation, the bottom half of a gravid female should noticeably increase in size. If they are still housed together, separate them at this point, and feed the female relatively small items, but do so often, every four to six days if she will accept them. Provide a hotspot of about 85 to 90 degrees in the enclosure, achieved either with a heat mat or heat lamp. A gravid female may actually refuse food for a while, but if she is in good health, this should not be a problem. She may also become a little more aggressive, so avoid disturbing her. After 120 to 140 days, the female may appear restless. This a sign that she is about to give birth. Females often shed their skin around this time too.

Rosy boas give birth to live young, and depending on the subspecies, litters can range from three to eight snakes. Babies should emerge from their thin membranous sacks with little difficulty, and they usually quickly disappear into any small hiding places they can find. The female will often shed again a week or two after giving birth, and from then on, you can concentrate on feeding her every week, to get her nice and fat in time for winter.

House young separately in small, 10-gallon enclosures. They usually have their first shed seven to 14 days after birth. Young rosy boas are tiny, so after their first shed, offer them the smallest pinkie mice you can find. In my experience, these snakes sometimes have voracious appetites from the start, or they can be incredibly fussy eaters, and this can be a challenge for inexperienced keepers. Young snakes that accept pinkies should be fed frequently, and they will increase in size at an incredible rate.

I do not recommend brumating them for their first winter. Instead, concentrate on feeding them and watching them grow. There are a number of things you can try to initiate feeding if you have a fussy eater. Alter the snake's environment a little. Changing the substrate or the hidebox, or altering the temperature gradient slightly, can sometimes make all the difference. Rosy boas have particular living requirements, and some may be more sensitive to their surroundings than others, so it pays to experiment with your setup a little. Always remember that these snakes like it dry; humidity is a definite no. If moving things around doesn't work, try leaving the snake and a pinkie in a small sack overnight, or wave the food item in front of the snake's face. If offering a live pinkie, don't leave it too long without checking, as you do not want an injured snake.

Another small, if not slightly gruesome, trick is to pierce the pinkie's head with a pin or scalpel. The scent of rodent brains has been known to elicit feeding.

Ultimately, if you provide the snakes with an ideal captive environment, they will feed eventually, but persistence is vital. If, after all that, they still refuse to eat, it might be worthwhile brumating the young snake for its first winter, following the previous guidelines. This should really be a last resort, but hopefully, the young snake will emerge in the spring with a healthy appetite.

Breeding snakes is a fascinating, time-consuming, sometimes daunting, but ultimately rewarding, experience for any reptile enthusiast. It is certainly not an exact science, and every breeder will have their own preferred way of doing things, so don't be afraid to experiment a little. But always remember the basics, and good luck breeding this charming little boa.

Tom Fay was born in England, but he currently lives in Japan. He started out fascinated with bugs and scorpions, before moving onto a variety of reptiles and amphibians. He has kept and bred a variety of animals from an early age.