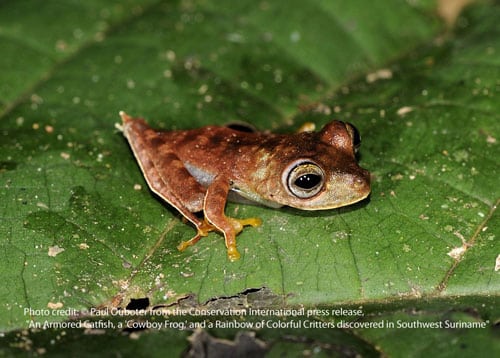 "An Armored Catfish, a 'Cowboy Frog,' and a Rainbow of Colorful Critters discovered in Southwest Suriname."

Conservation International today announced the discovery of 46 new species during a three-week survey of southwest Suriname. The survey, which was an initiative of the organization's Rapid Assessment Program, found several new amphibians during its expedition, including a frog so small it can fit on a man's index finger. The frog, Hypsiboas sp, also known as the "cowboy frog" because it has white fringing along its legs and a spur on its "heel," was discovered perched on a branch at night in an area near Suriname's Kutari River.

The survey, which took place in September 2010, was conducted by a team of 53 scientists, indigenous Trio people, and students in order to document the area's biodiversity and develop sustainable ecotourism plans for the local people. Areas explored included the Kutari and Sipaliwini River systems near the village of Kwamalasumutu. 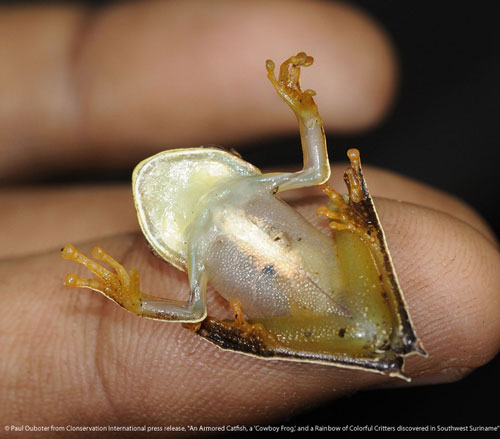 "An Armored Catfish, a 'Cowboy Frog,' and a Rainbow of Colorful Critters discovered in Southwest Suriname."

"Our team was privileged to explore one of the last remaining areas of vast, unroaded wilderness in the world," CI scientist and Rapid Assessment Program Director Dr. Trond Larsen said in a statement released today by Conservation International. "As a scientist, it is thrilling to study these remote forests where countless new discoveries await, especially since we believe that protecting these landscapes while they remain pristine provides perhaps the greatest opportunity for maintaining globally important biodiversity and the ecosystems people depend upon for generations to come."

The full press release can be seen here.