The Ozark Hellbender (Cryptobranchus alleganiensis), one of the largest salamanders in the world, today was listed as an endangered species by the U.S. Fish and Wildlife Service. The agency cited population declines of up to 75 percent since the 1980s, fungal diseases, and severe physical abnormalities as contributing factors to their listing. It is estimated that there are less than 600 hellbender salamanders living in the wild, of which its range is the White River of southern Missouri and northern Arkansas. 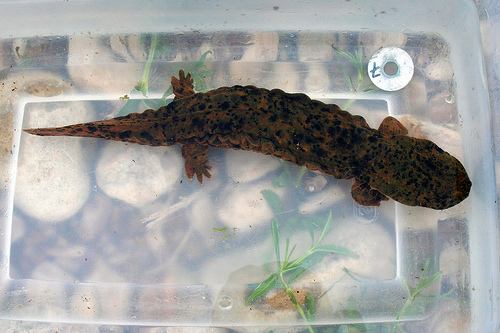 “The Ozark hellbender faces extinction without the protection afforded by the Endangered Species Act,” said Tom Melius, the service’s midwest regional director. “Listing provides tools and an infrastructure within which partners can pool resources and expertise to help save this species.”

Hellbender salamanders are generally flat and their skin is folded and wrinkled. They breathe by absorbing oxygen through their skin, which is covered in mucus. They can live up to 30 years. Their entire life is spent in the water. They live alone, except when mating, when they live in groups of around 6 to 12 animals. They grow up to 2 feet and require constant levels of dissolved oxygen in order to survive.